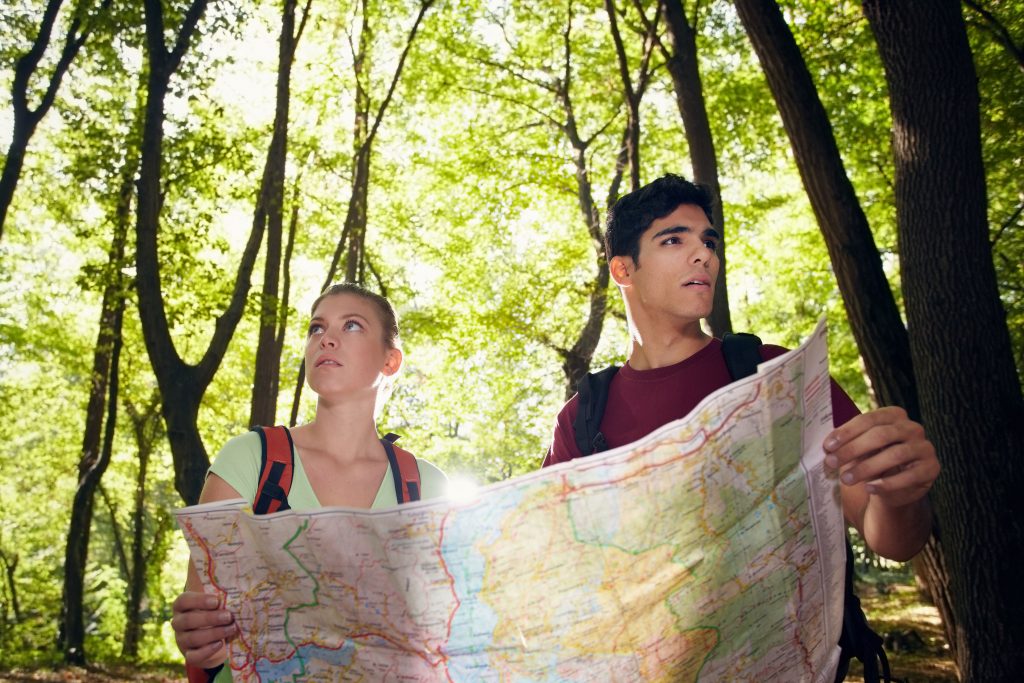 I never thought the “wild, wild West” referred to Western Pennsylvania, but after countless contretemps in the wilderness of our fair state, I’m thinking hey, maybe it does.

I have hiked in the Rocky Mountains and the Grand Canyon without incident. Yet in the gentle hills and river valleys of the Keystone State, I have sometimes barely survived a walk in the woods.

Once while sauntering along a creek in McConnells Mill State Park, I tripped over a jagged rock, badly cutting my knee and curtailing that day’s activities. Another time I clumsily slid down a hill in the woods of Schenley Park, landed in a puddle of muck, and emerged looking like a mud wrestler. And one cloudless June day, as I gazed at sheep in a golden meadow deep in rural Pennsylvania, I had a violent pollen attack, coughing and sneezing so uncontrollably, I confined myself indoors for days afterward.

Nor is my husband Al immune to these misadventures. He has the worst luck in South Park. Years ago, when he worked for Allegheny County, he spent a day clearing weeds in the park, only to return home at night with his arms and legs covered with poison ivy’s signature. Weeks later, he forgot to apply sunscreen when he jogged shirtless down Corrigan Drive, ending up in the hospital with a blistering sunburn. And once at a picnic, a bee invaded Al’s potato salad and stung him in the mouth after he ate a spoonful, causing his tongue to swell like a balloon. Another trip to the emergency room.

There was the time Al and I  lost our way in Twin Hills Park, wandering off the main trail and winding up in a thicket of woods, struggling to claw our way through clumps of bushes and tangled brush, endlessly circling, feverishly searching for the path, and landing in exactly the same spot each time. Trying not to panic, we dreaded the evening’s headline would read, “Clueless Couple Gets Lost in Own Neighborhood.” Finally we found our way to Greentree Road, far from where we first entered the trail, but mighty grateful we wouldn’t be making the nightly news.

Another cringeworthy episode was the time we were rowing on Lake Arthur in Moraine State Park, basking in the sunlight on an August day, when dark clouds suddenly rolled in and the sky turned an angry black. We spied flickers of lightning and detected rumbles of thunder. Then flashes of lightning and roars of thunder! Rats! Nowhere near the shore, we rowed like fiends to get there fast, vowing never again to drift so far from dry land.

We also had a close call in Cook Forest one autumn. We were staying in a rustic lodge buried in the serene October woods, when one night we were awakened by strange noises in the forest, but were too scared to investigate. Next day we learned a bear was foraging for food outside our cabin. Moral: Better to be faint-hearted wimps than a late night snack.

Yes, nature can be cruel. Nature can be treacherous. Nature can be unforgiving. I’m convinced of that whenever I hear about whitewater rafters drowning in river rapids or hikers falling into ravines and dying of exposure. Compared to those tragedies, our minor misfortunes seem petty indeed.

Don’t get me wrong. Our forays into the wilderness haven’t been entirely bad. We have plenty of fun outdoors when Mother Nature is on her best behavior. The good times definitely outweigh the unpleasant ones.

We love walking on the Panhandle Trail in Collier Township where we frequently discover little surprises along the path. Rock quarries and fossil cliffs. A windmill and a curvy meandering brook. Pink birdhouses, a giant mushroom, and blue chicory flowers underfoot. We love Boyce Mayview Park in Upper St. Clair, where we often bounce pebbles in Chartiers Creek and watch them skim and skip across the water, forming concentric circles. We once saw a deer wading across the stream—first time we ever saw a deer in water.

We love roaming around Cedar Creek Park off Route 51, especially after a rainfall. We relish the freshness of the green woods, the smell of the mud, and the droplets of rain shaking down from the trees, their wet leaves dappled with flecks of sunshine and festooned branches brimming with squawking birds. And we love Canonsburg Lake along Route 19, where the animal life constantly amuses. Ducklings that follow their mom and form a perfect military row as they waddle across the water. A snapping turtle in the lake. A blue heron above the waterfall. A little brown bat creeping on the ground. A fat beaver below the dam.

“Nature is my teacher,” wrote William Wordsworth, but what exactly does it teach? What we learned is that nature is an eccentric, contradictory, double-edged sword.

For every duck pond and deer sighting, there’s a hungry carnivorous beast. For every honeysuckle vine, there’s a patch of poison ivy. And for every radiant shaft of sunlight, there’s a painful sunburned back.

The natural wilderness always contains a hint of danger, so whenever we venture out into the rough, the Henry David Thoreau in each of us must weigh the risks against the rewards, especially here in the wild, wild west of  Pennsylvania.