2019 was a typical year. My daughter was finishing her last year of elementary school. My husband and I worked our corporate jobs in town while our 13-year-old husky mix held down the fort. Cyan was an anchor in our family; my bulletproof dog.

Then 2020 hit. By the spring, Cyan was ready to move on and watch us from above. Her body gave out and we gave her the gift of letting her go. She passed peacefully in our home and I swore off dogs for the next decade.

Fast forward a whopping four days. The void in me was greater than I ever imagined. All of my reasons for not getting another dog were moot, thanks to COVID-19. We were all home full time with nothing better to do than mop up dog pee and endure the sleepless nights of a newborn. We needed a distraction and our bustling lives had been indefinitely halted. By the time life would return to normal, I figured we’d have an adult well-adjusted dog who will become Cyan’s successor. She can manage the house during the day … keep the cats in line. 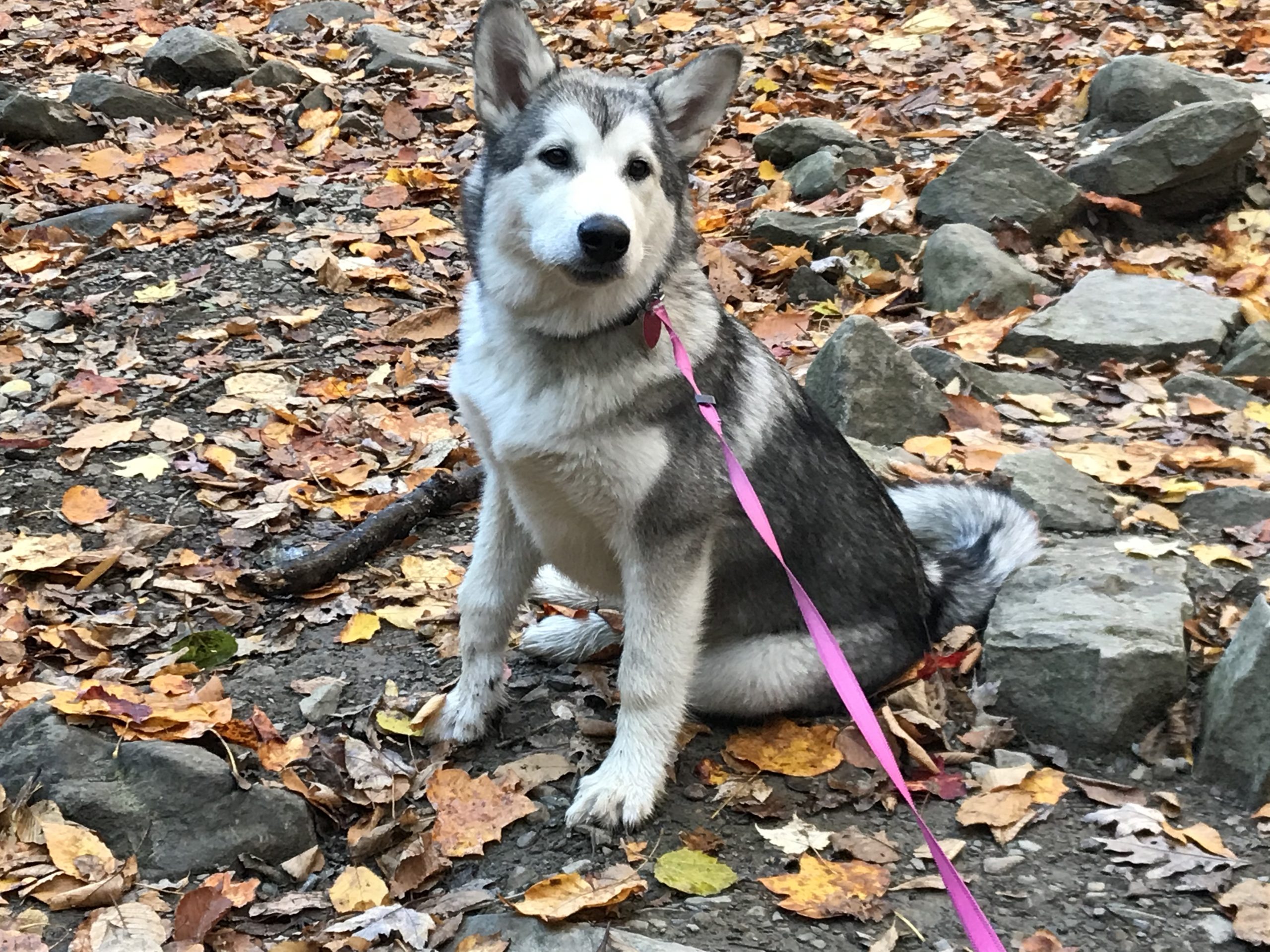 On June 5, 2020, Nukka the Malagator was born. We watched her litter grow through pictures on Facebook. Eight weeks later, we brought home a 20-pound, fluffy lead weight with tiny razors for teeth. Our first mistake was thinking we could transport her in a cat carrier for three hours to get home. She’s only eight weeks, right?  How big could she be?  Five minutes into the drive, we pulled over, dislodged her from the carrier and held her the rest of the way.

When your previous dog made it to 13 years old, you have a selective memory on the early days. Sleep deprivation is real with a puppy. Don’t ask me, though. Since I was still working (from home), my furloughed husband took the night shifts. ALL the night shifts. Besides spontaneous naps intermittently throughout the day and the occasional, “You take her,” he survived.

We researched Alaskan Malamutes and knew everything we should know—in theory. The stubbornness of this dog does not do any research justice. Malamutes are smart. I think they verge on genius. Defiant genius. She knew exactly what we wanted even at three months. That didn’t mean she’d comply. 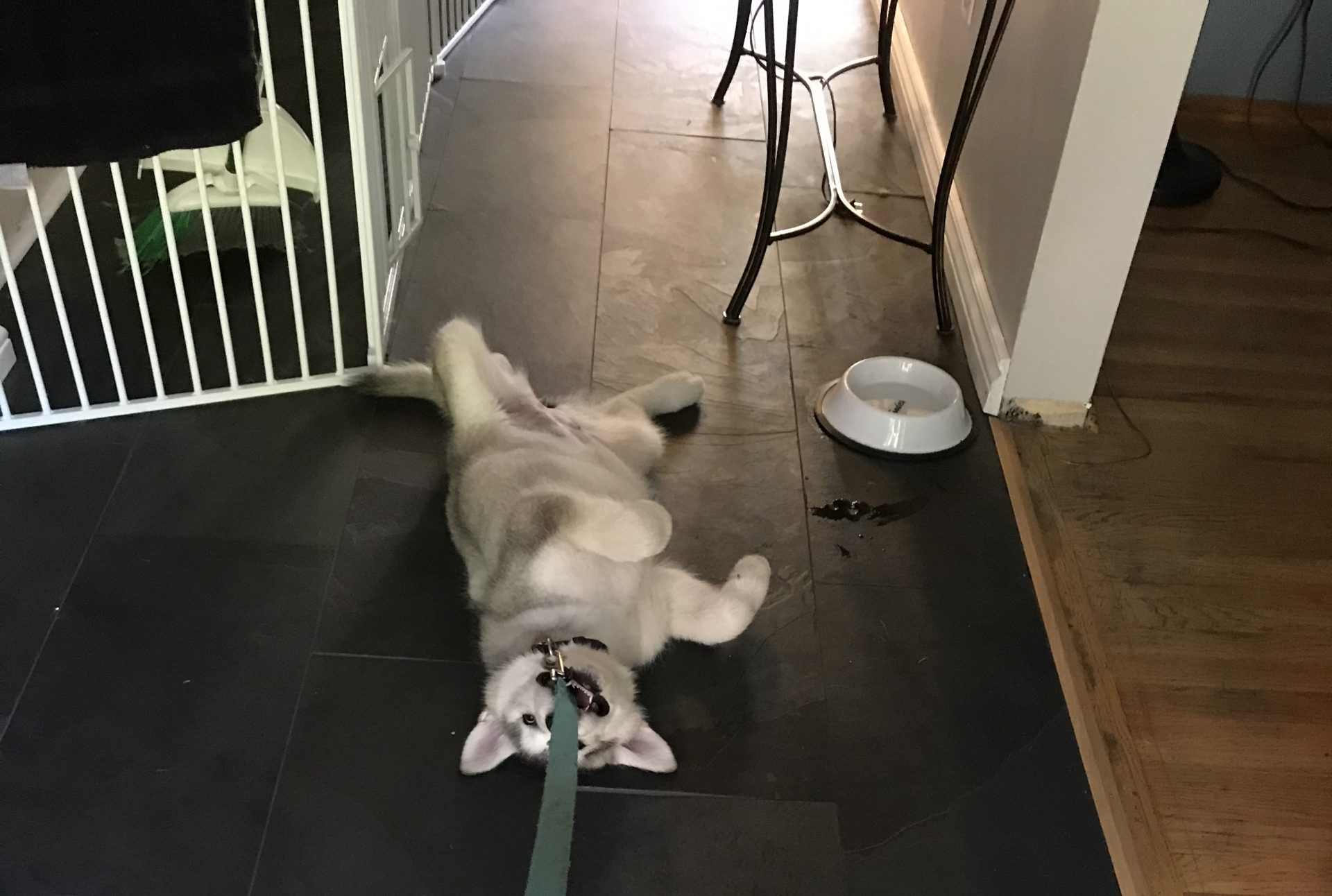 A fellow malamute owner educated us on the term, Alaskan Flat Tire. Nukka was a pro from the day she came home. If she didn’t want to walk, it was as simple as plopping her butt right down on that concrete and putting the brakes on. Often, it escalated to her throwing herself down on her back with paws pointing to the heavens and her dopey tongue flopping out the side of her mouth. She wouldn’t budge without the promise of something tasty to lure her back up.

Google also advised me that puppies lose their teeth until around 7 months old. Google did not include the details of a malamute’s assault with those teeth before they turn into ‘real dog’ teeth. Nukka performed daily attacks up until about October. She was Nukka the Malagator, and any time a tooth scraped our fragile flesh, she malagated us. I think my hair bled one night when she finished with the malagation.

As Nukka grew, the cute little pitter-patter of puppy paws morphed into the sounds of an old lady in house slippers shuffling through the house. We could hear her approaching from three rooms over as if grandma was bringing her tea in to sit down and have a visit.

But it wasn’t tea the pup was carrying in; it was the energy of 10 wild horses ready to be released into a field. Then as soon as the house had faced the wrath of Nukka’s zoom sessions  (bouncing off each individual piece of furniture while assaulting any human in her way) she would fall dead asleep in the middle of the room.

One important thing to know with this breed is that on their hind legs, even at five months, they are the size of a young human. And when I say young human, I’m actually referring to a middle-school-aged child. If I am going to impart any type of wisdom on the reading audience, it’s to NEVER, EVER, under ANY CIRCUMSTANCE, turn your back. 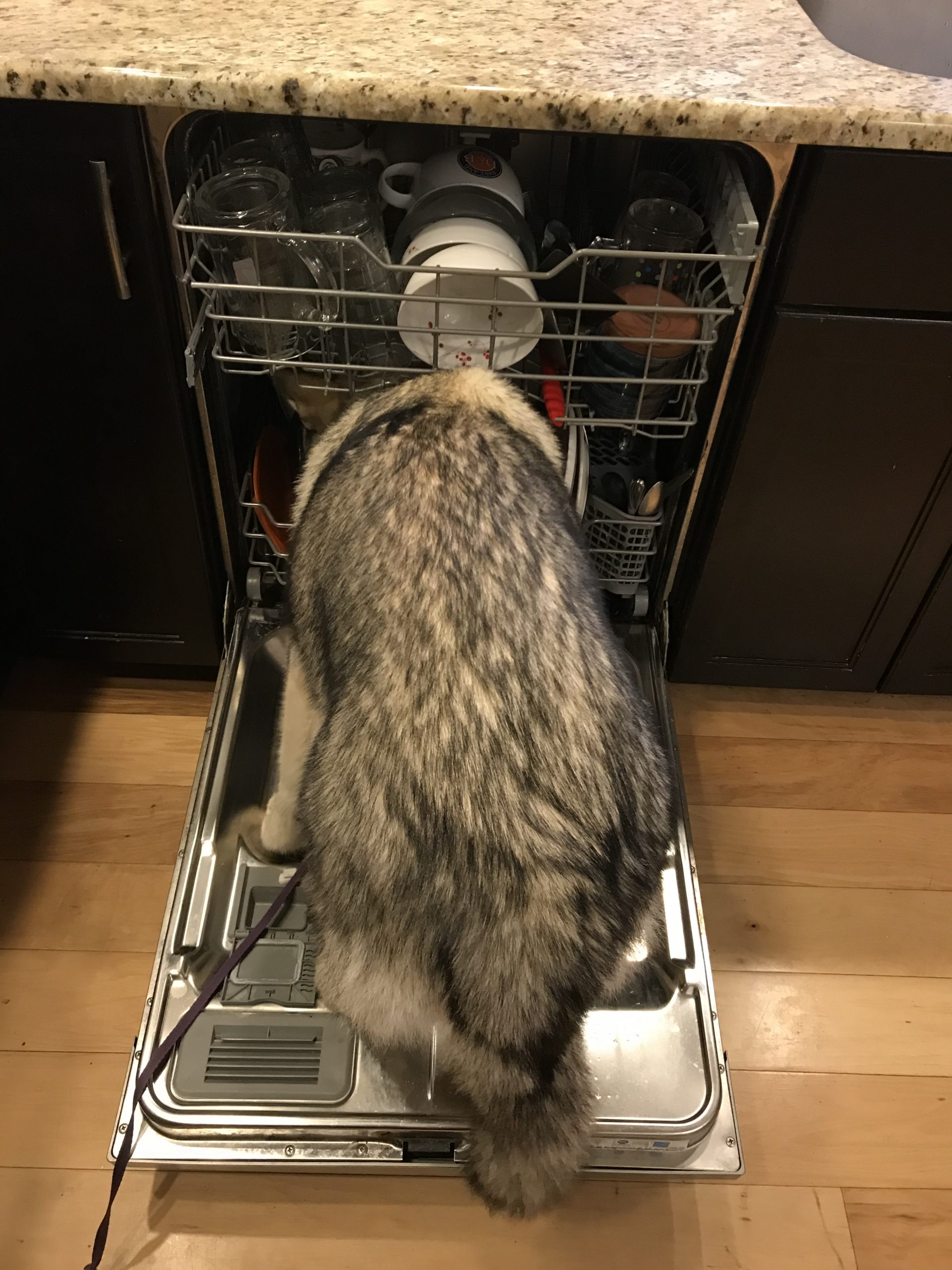 To save you all the lessons I have learned these past five months, if you do not heed my warning, here’s a list of what will be in jeopardy when your back is turned for more than three seconds (and I timed this … it’s a scientific fact).

Nukka ventures with us to all the local stores and has become an ambassador of sorts. I discovered if you ask a store if they allow dogs, the majority are open to it. This is critical socialization for her and somehow her love for people trumps all stubbornness and defiance. She turns into a floppy muppet-like monster-puppy who begs for tummy rubs. It’s a win-win.

We also take classes, walk three times a day (while incorporating training) and she frequents doggy day care. All of the madness we’re enduring and all of the time equity will pay off once she graduates from her current Malagator status and becomes a true malamute once more. I believe you get out of a dog what you put in. So, through her antics, we laugh, we pass her off to each other when we’re ready to scream, and we thank the heavens when she falls over for the night.

It hasn’t even been a year since this 60-pound, obstinate, defiant, LOVING dog was born. Even when she thieves a box from recycling or finds cat toys to try to eat, we remind ourselves she’s a toddler. A cute, fluffy toddler who knows that even through her temper tantrums that she’ll likely get a car ride to the park later.

Nukka the Malagator was our 2020 Cutest Pet Contest Winner. Get the story here.