Frantically fumbling through my green backpack’s bulbous folds, I finally find my passport. Glancing back at the electronic screen which reads, “Chicago to Pittsburgh,” I collect myself and take one step closer to the boarding kiosk.

At that moment, I hear a sarcastic quip from the older man behind me in line: “We’re probably going to get the best spots on the flight!” (We’re last in line.) Looking over my shoulder, I see white, fluffy hair crowning the sheepish face of a man holding a flaky leather suitcase.

“Is your home in Pittsburgh?” I ask, smiling. He nods yes and we quickly exchange stories. He grew up in Beaver Falls and fell in love with watching the steel mills as a young boy, he said, fondly recalling the golden orange slag that would surge from the processing plant. I immediately laughed and said, “That’s so Pittsburgh.”  He shrugged and responded, “I guess it is.”

Growing up, I wasn’t always proud of my Pittsburgh-origin. In fact, I resented it. Steelers gear made me cringe, I wasn’t the biggest fan of french fries on a sandwich (don’t worry, I’ve changed my ways) and I always knew I wanted to leave the city for college.

But, coming back for fall break after nine weeks away rekindled a nostalgia for my home city that I didn’t know I had. 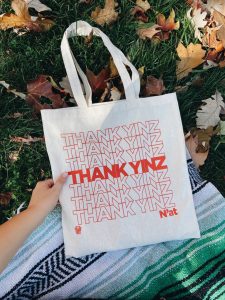 This week, while waiting on a friend in Uptown, I stopped at Commonwealth Press, a Pittsburgh-based screen printing store. While there, I stumbled upon a Thank Yinz bag and immediately remembered a conversation with a friend earlier in the semester. After saying “yinz,” I had to convince her that a “yinzer” was not just a made-up phrase I’d concocted.

Smiling at the bag, I felt a burst of pride for the city and its strange slang and decided to buy one to take back with me to Illinois. After relaying the story to the cashier, he decided to gift me with two, “Love Yinz” heart stickers, so I can better spread the word on campus.

While on break, my family and I stopped by Fiori’s Pizzaria after spending the day at The Frick’s RADical days, an annual thank you to the public organized by the Allegheny Regional Asset District that provides free admission to Pittsburgh hotspots. Driving up the steep Pittsburgh hill, listening to the vibration of rubber wheels against cobblestone, I felt at home. The crowded diner full of Steeler-jersey-wearing Pittsburghers munching on sweet and warm Fiori’s pizza made me nostalgic for dozens of late-night stops at the corner-in-the-wall pizza shop.

My last day in Pittsburgh, I visited a few of my former Mt. Lebanon High School teachers (but, as always, I was running late and didn’t get to visit nearly as many as I’d hoped). Chatting with my senior year English teacher, he told me “stay true to your roots.” The moment I realized I’ve reached the point where I have “roots” to return to was surreal. After all, I’ve always viewed the cliche as a way of entrapment, forcing people to conform to their old neighborhood’s way of life.

But now I see it as a quiet, thoughtful reminder that you are your hometown. Abandoning it out of embarrassment or personal pride forces you to sacrifice a part of yourself. To be honest, I’m still not sure what that looks like, or what my teacher meant. But, I do know that it’s a lifestyle choice. Staying true to one’s self begins with the very basic practice of remembering that who you are is a direct result of where you come from.

Anna Mares is a Mt. Lebanon resident and 2022 graduate of Mt. Lebanon High School. She is currently studying international relations and journalism with a minor in Spanish at Wheaton College, IL.