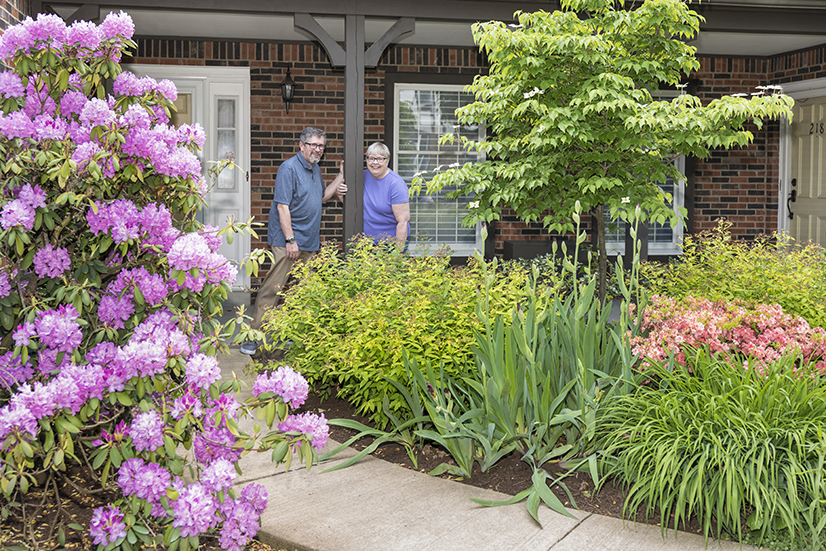 The kids are grown and gone, and the focus shifts from parental responsibility to dreams: of faraway places, maybe. Or perhaps the chance to rediscover that western Pennsylvania’s four seasons are not called plant, weed, rake and shovel. The mysteries of soffit and fascia have lost their charm. Yet Mt. Lebanon has not.

As dilemmas go, this one’s easier than most. Mt. Lebanon offers condominium, cooperative and townhome alternatives, for those looking to streamline their living situation. They range from sky-high but affordable units at 1160 Bower Hill Road to the brand-new elegance of condominiums in progress at 400 Washington Road across from St. Bernard Church.

First, a brief review of terms: condominiums are individually owned. Owners pay a monthly or yearly fee that can cover everything from snow removal to grounds keeping to roof repair. Fees vary according to the size of the home. A homeowners’ association sets the rates for all properties. Main-Line I and II, off Shady Drive East, is a condominium community, as are Woodridge, off Connor Road, 750 Washington Road and 300 Gilkeson Road. 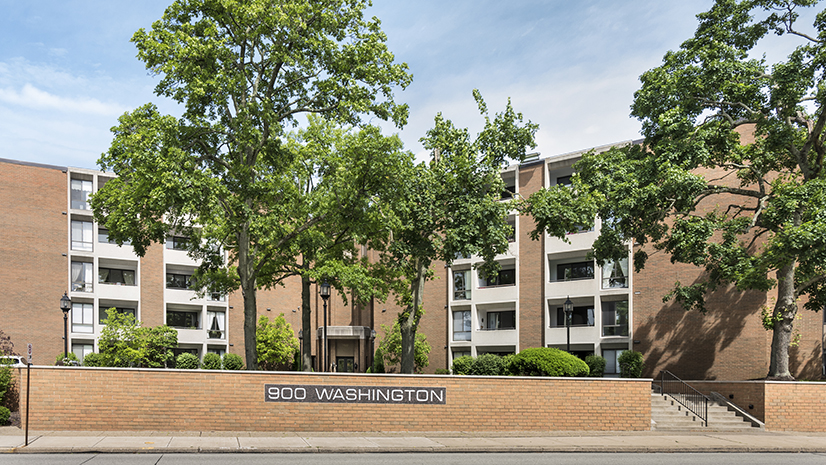 Residents of housing cooperatives own shares of stock in the entire community, rather than individual units. Shareholders pay a monthly fee, which could include shares of a mortgage payment and taxes, as well as services such as landscaping and snow removal. Bower Hill at Mt. Lebanon, near St. Clair Hospital, and  900 Washington Road (across from Hazel Drive) are cooperatives. In general, cooperative units are more affordable than condominiums.

Duane Palmieri, a realtor with Keller Williams, has lived in Mt. Lebanon for 22 years. He says that, though prices have gone up, Mt. Lebanon still is a bargain. Noting the skyrocketing costs of units in downtown Pittsburgh, (one Market Street penthouse is listed at $14 million), “There are still parking issues and a lack of amenities there. We have better amenities here,” he says.

So why do people make the switch from a familiar and most likely well-loved family home to a condo or co-op? Palmieri says there are lots of good reasons.

“If you have a 5,000-square-foot home and the kids are gone, you have to do things like run around and flush the unused toilets so they don’t release sewer gas. There’s still maintenance issues, and taxes,” he says. “Or you might have a place in Florida where you want to spend more time, or you want to travel and have someone here to keep an eye on your house.”

Homeowners will sometimes decide they don’t want to leave the burden of a house to their children. In addition, as people get older, “time becomes more important,” Palmieri says. “I’m not always going to want to clean out gutters. I’d rather my time become more my own.”

“People know when it’s the right time to move,” says Jane Compagnone, who has worked in Mt. Lebanon real estate for almost 40 years and now owns Realty Referral Resources, which matches sellers with real estate agents. “They’ll vacillate and ponder, and then one day they wake up and decide it’s time.” 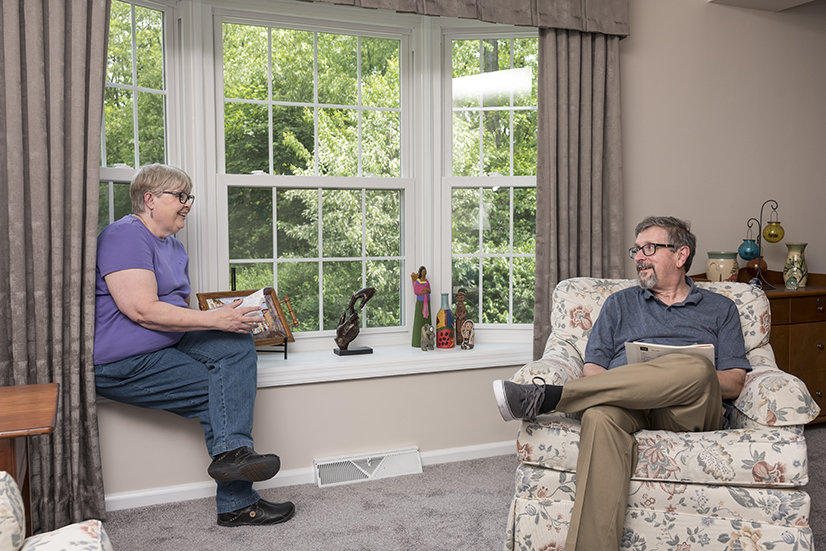 For Jane and her husband Ralph, who died in 2015, that time came 15 years ago, five years after their sons had moved out. After years in a six-bedroom home on Sunnyhill Drive, “the house had outgrown us,” she says.

The Compagnones  moved to Woodridge, a townhome community on Connor Road in Mt. Lebanon—not Bethel Park, as some might assume. “It turned out to be a great move,” Jane recalls. “It makes such a difference just to be able to leave the house and not worry about things.”

The Compagnones sons’ were shocked when they sold the family home. “They were very upset. They loved the house,” Jane recalls.  “My one son said, ‘If I had the money, I’d buy the house.’”

But the bottom line is that he didn’t;  one son moved to San Diego and the other to Boston. “I told them, ‘You can move across country, and Daddy and I can’t move a mile away?’” she says, laughing.

The Compagnone boys adjusted: T.J., the younger, visited the new owners and showed their kids where he and his friends used to play flashlight tag in the back yard. Brian, the elder, visited when he was in town on Christmas Eve, the first year after the house was sold.

“We used to do a big open house every Christmas Eve, and Brian felt like he had to stop in that night. I told the new people he might do that. They were great,” says Jane, who has continue to live in Woodridge, where she has many friends. 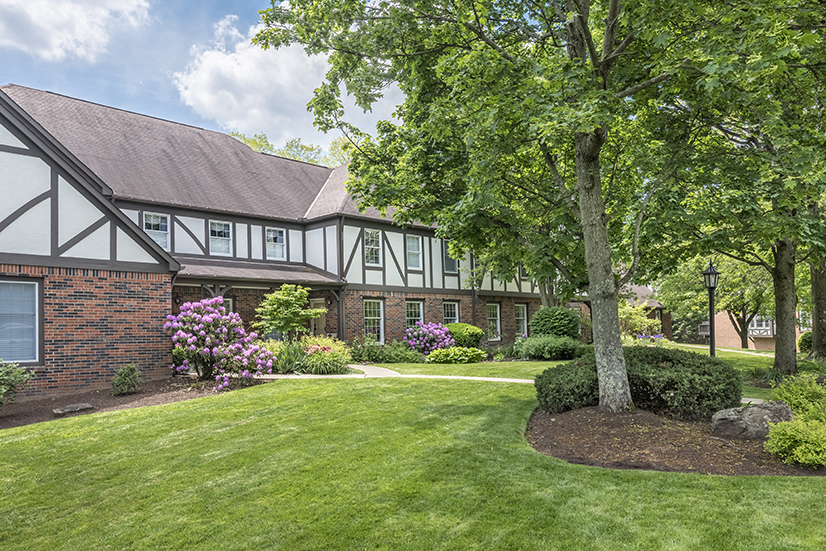 Several Mt. Lebanon residents who have “right-sized” their housing say they’re very pleased with the change. LuAnn and Sam Mudrak sold their suburban Washington, D.C., home in 2010 to move closer to Sam’s mother in Westmoreland County. A visit to Mt. Lebanon convinced them to settle here, and they looked at several houses.

“We wanted to pay cash for a house and get away from a mortgage,” LuAnn recalls. But the local houses they found in their price range tended to be older, “with push-button light switches and one-car garages.” They thought they’d have to increase their budget, but instead, like the Compagnones, they chose Woodridge.

“When people come in, they say they didn’t even know this area was here,” says LuAnn. When the Mudraks discovered it, they were delighted with the variety of floor plans and details. “Our living room has a bay window that looks out onto woods,” LuAnn says. “When I saw that, I was sold.”

They’ve been very happy with their four-bedroom townhouse. Although it is not easy to walk from Woodridge to the town center, people stroll the development’s beautifully landscaped streets. The T is close, and both the Galleria and South Hills Village are a five-minute drive away. “There are six grocery stores within six miles,” LuAnn adds.

As in other condominium communities, Woodridge owners pay a monthly fee for maintenance, landscaping, and other conveniences. The fee also includes upkeep of the community pool and party room. “I’ve been told our (HOA) fees are high, but for me, it’s worth it. It is very well-maintained,” LuAnn says 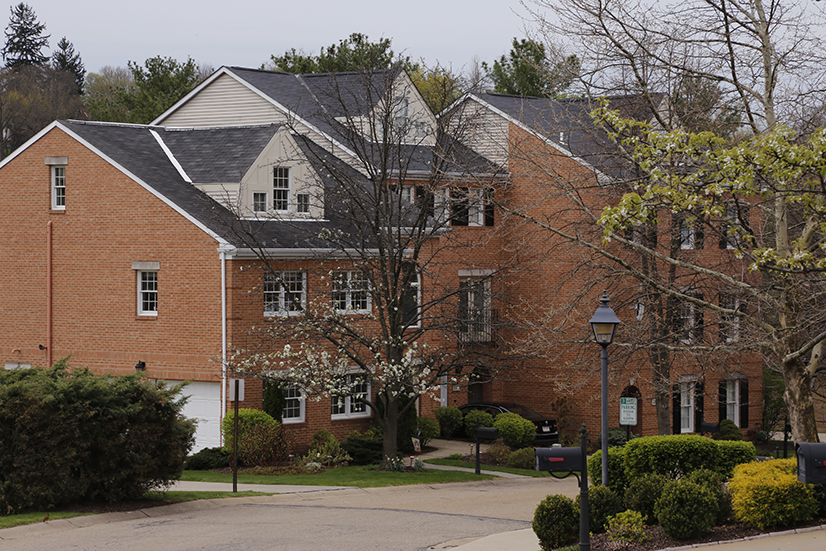 Main-Line I and II have meant luxury condominium living in Mt. Lebanon for almost 30 years. Kathryn Rector, president of Main-Line’s homeowners’ association, and her husband, Bruce Schramm, moved there from a large house in Upper St. Clair.

The Rectors live in the only full-size house in Main-Line, on Merion Drive.  With three bedrooms, a game room and a wine cellar, it offers more than most townhomes. And though she didn’t quite get the city move she wanted, Kathryn says she loves Main-Line’s convenience. (The name refers to the fact that the trolley line is a short walk away.) And the shops and restaurants of Washington Road are just a short hike up Alfred Street.

The Rectors travel a lot, and enjoy peace of mind of knowing that maintenance people and neighbors can keep an eye on their house, Kathryn says.

Nancy Tetlow and her husband Frank, also Main-Line residents, sold their house on Orchard Drive and moved to Main-Line 13 years ago when they were both in their 50s and still working. There are couples with young children who live there as well, she says. The Tetlows purchased their two-bedroom unit partly because it has a first-floor master suite, a comparative rarity in Main-Line.

“I like it a lot,” she says of life in Main-Line. It was a really good move for us. It’s walking distance to so many things, and we can take public transportation to Pirates games.”

Tetlow says Main-Line residents can expect exterior window washing twice a year, snow removal (“for three inches or more,” she adds), and exterior painting every five years. There are no shared facilities like a swimming pool or community room, but residents gather for an annual summer picnic and holiday party.

As empty nesters continue to look for alternatives to the big house/big yard lifestyle, Berkshire Hathaway Home Services is selling luxury units that don’t exist yet. As of autumn 2018, the first phase of condominiums and townhomes at 400 Washington Road, at the corner of Bower Hill and Washington Roads, will be move-in ready.

Tony Mete, Berkshire Hathaway’s manager, says four of the building’s 12 condos, and one of its four townhomes, are already under deposit or contract. Of the current buyers, half are from Mt. Lebanon, he notes. “They’re buying into the community, with walking to shops and nearby transit.”

The new community’s main selling point is brand new contemporary design (airy spaces with 10-foot ceilings, open floor plans and lots of windows) in the heart of Mt. Lebanon—a combination that’s unique to 400 Washington Road. But unique comes at a price: units cost between $400,000 and $600,000, or perhaps even more: condominiums there already have sold for as much as $645,000.

Leaving the family home can be an invigorating adventure, a bracing step into the unknown—but with lawn care and party rooms included. Compagnone recounts a particularly sweet memory from more than 15 years ago, shortly after she and her husband moved to Woodridge:

“There had been a big snowstorm. And we got to lie in our bed and listen to someone else shovel the walk.”