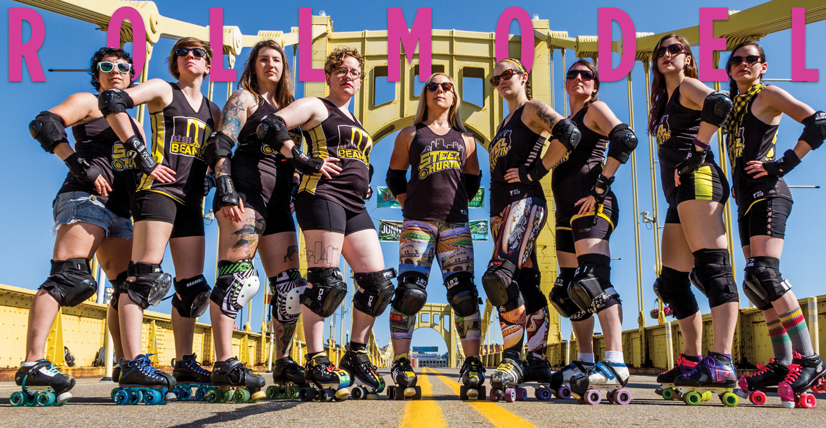 Jamie Fargo does not look fearsome.

At 5’2,” blonde and blue-eyed, she’s pleasant, well-spoken, a contracts attorney for PNC, a cat lover with two grown cats, Clementine and Geno, and foster kittens romping through the house.

But come the weekend, her alter ego, Ally McKill, sprints hard into a line of blockers looking to knock her out of bounds, while  teammates Bonecrusher, Dakota Slamming, Bruisiana, and Deja Boom hip-and-butt slam their opponents to open the way. Jamie has played both jammer and pivot (see “The Set-Up” for a rundown on how roller derby is played).

Today’s roller derby is a heady cocktail of athleticism, attitude, and rock ’n’ roll, with a few good shakes of punk and camp. For Jamie, who at 41 is a 14-year veteran of the sport, the derby bouts may be the best part of her week. “I love the physical exertion, the blood running, and the sweat starting,” she says.

She and her husband, Scott, a purchasing and supply chain consultant and a Mt. Lebanon volunteer firefighter, who live on Academy Place, met through roller derby. Jamie’s fledgling team needed a coach, and a teammate suggested a male friend (Scott); the team agreed. (Selling point: “She said he was fun and not creepy,” reports Jamie wryly). She and Scott tied the knot in 2010.

A native of Sharon, Jamie grew up active: cheerleading, gymnastics and dance, and “with a sense of adventure; I was always pushing boundaries.” After college and law school at the University of Pittsburgh and Pitt Law, she was looking for something different to do, and a new social group. She heard a roller derby league was forming, and showed up for the first meeting along with about 80 other women.

“These are my best friends. We go into battle together.”

Her league, the Steel City Roller Derby, has about 50 skaters, making up three teams: the Steel Hurtin’ (their A level travel team); the Steel Beamers (their B team), and a developmental squad, the Blitzburgh Bombers. Steel City also has a junior league for skaters ages 10 to 18, the Derby Brats, coached by experienced players.

The league started in 2006, holding its first games at Blade Runners in Harmarville, and was admitted to the Women’s Flat Track Derby Association (WFTDA) in 2007. The season runs from March through July; games are twice a month, usually one home and one away. WFTDA league and division championships and the Continental Cup happen
in mid-August.

Jamie’s team, The Steel Hurtin’, ranks No. 25 out of 159 teams in their division, the North America East. In world standing—among 456 WFTDA teams on six continents—Steel City ranks  No. 70, in the top 20 percent of roller derby teams worldwide. In addition to facing teams from eastern Pennsylvania, Michigan, Ohio, Colorado, Indiana and Virginia, her team has traveled to the U.K. to compete with the Tiger Bay Brawlers of Cardiff, Wales, and the Newcastle Roller Girls of Newcastle upon Tyne, England.

Their roster includes a librarian, a university administrator, a mortgage officer, college and graduate students, a dental CAD CAM designer and a hair stylist, ranging in age from early 20s to 40s—maybe not what you’d predict. But there’s not much predictable in roller derby.

Except one thing: Injuries are part of the deal, and in 14 years, Jamie’s been lucky enough to avoid a long list. She’s sustained three broken fingers on her left hand (in separate years), one torn ligament in her left foot requiring surgery and a scratched cornea. “You could get hurt in less interesting ways,” she says with a shrug.

As a skater-owned and operated nonprofit, team members attend an average of four practices per week and manage league support systems. Everyone serves on a committee: game production, finances, sponsorship, community outreach and training. Jamie  served as team captain four times and continues to work on committees for the league. “The leadership skills you pick up working on any of these committees and the resulting boost in confidence are so valuable in the workplace,” she says.

“In contract negotiations, I’m much more firm and assertive, which has really helped my career. Being in roller derby helped me develop that confidence,” she says. The solid friendships formed through the seasons are priceless, she adds. “These are my best friends. We go into battle together.”

Fiercely competitive and physical, these players hit their opponents hard. But when the game’s over, it’s time to party. No matter who wins, they leave it on the track, and join forces to celebrate. “In roller derby, you can be completely yourself, no matter your size, your age, or your sexual identity,” says teammate Maryane Kimbler, a.k.a. Riley Rinkrash, explaining why derby has been her jam for five years. “This sport is so different than the others by how accepting it is of so many different body types, and that anyone can succeed in its many positions.”

Even someone who may be small in stature but strong enough to get through the gaps and speed away. “Every body has its gift,” says Jamie. “I keep surprising myself with the things I can do.”

Roller derby debuted in Chicago in August of 1935 as a livelier alternative to the walk and dance marathons of the Depression.  Created by film promoter Leo Seltzer, the concept of “Transcontinental Derby” was a days-long marathon: one man and one woman per team, 57,000 laps or 3,000 miles in an imaginary Los Angeles to New York race. It took about three weeks to complete one race.

Seltzer soon realized the crowd needed more than endless circling around a track to hold interest, so he and sports writer Damon Runyon reimagined roller derby, adding “noise, color and body contact,” and introduced the team and game format: both sexes participating, with the same number of players, and the same track.

CBS began televising matches in 1948. In 1949, Seltzer formed the six-team National Roller Derby League, with five teams on the East Coast and one in Chicago. Rival leagues popped up all over the country as roller derby waxed and waned in popularity from the early ’50s through the early ’70s, until its last hurrah, packing Shea Stadium with 27,000 spectators for the 1973 World Championships.  It was off the air and gone by the end of that year.

Around 2001, a group of Austin, Texas, women reinvented the modern form of roller derby, keeping its rebel core of full-contact sport aggression, adding a punk-rock sensibility with skater names like Joan of Dark and Tequila Mockingbird. New interest brought growing crowds to underground bouts, and two leagues were eventually formed: the Lonestar Rollergirls, which played on a banked track, and the Texas Rollergirls, which played on a flat track.

The internet helped spread the word; new leagues and associations began to multiply, organize competitions, and re-calibrate the rules of the game.  In 2009, Drew Barrymore’s film about roller derby, Whip It, gave its growth another big boost.