It’s 6:30 a.m. and the alarm goes off. You briefly think about getting in the shower to get ready for work but then you realize it’s Sunday and that alarm is for your weekly long run. You grab your shoes, watch, water bottle—and your toga.

If you’re part of Fleet Feet Sports’ free weekly Sunday running group, where each week has a theme, you would have donned your classical garb for the Toga Run or perhaps stopped by five local cathedrals on a History Run. You might have blown through town on the Exhausted and Stacked Run, past the city’s large exhaust stacks, or enjoyed a frosty morning on the Steelers Tailgate Run, which concluded near the stadium with a pig roast. Or maybe you took part in one of the night jaunts such as the Pub Runs, which tour a section of the city and end up at a local pub, or the Lebo Light Night Run, where participants wore glow-in-the-dark jackets and carried glowsticks. 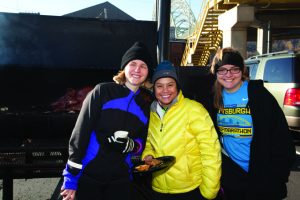 Fleet Feet in Norman Center is a sporting goods store that carries everything for running, from socks and shoes to wristwatch GPS units. But a growing portion of its mission is to create a community of runners, building rapport and creating friendships. To that end, the store began weekly Sunday runs with a handful of people in 2007, but in the last two years, that number has swelled to an average attendance of 75 runners with some events attracting as many as 97.

The point, says Karen Harr, Fleet Feet’s director of running groups and running outreach, is to use kooky themes to keep running fun and encourage camaraderie among runners, who often forge tight relationships out on the asphalt as they gear up for races or knock off the last few holiday pounds. While no one in the group is an Olympic contender, many runners are training for marathons and half marathons, the culmination of which is often the Pittsburgh Marathon—to be held this year on May 5. And Fleet Feet helps with that too by offering a comprehensive marathon and half marathon training program. 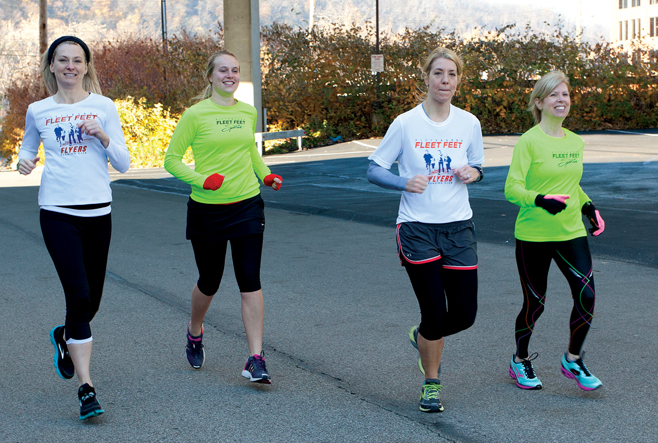 While participation in the runs is free, enrollment in the marathon/half marathon training program costs $125. That fee includes:

•Help from certified running coaches, as well as mentors and pace group leaders during the long Sunday run (sometimes on portions of the course)

•Recovery food and beverages at the end of the run

The kickoff for the program is January 12 with the first run, January 19. In addition to the long runs, free track speed workouts happen every Wednesday evening.

Participants say the runs include athletes of all ability levels, so there’s always someone to help motivate you. “We cater to all abilities no matter how fast or slow,” says Fleet Feet owner and Woodhaven Drive resident Bob Shooer. “The satisfaction that we get from watching our participants achieve their goals is hard for me to describe.”

For long runs, Harr prepares detailed, colorful maps with runs of several lengths, including turn-by-turn directions and locations of rest rooms. Water is always available and often, representatives from partners Brooks will allow runners to test new products and register to win prizes. 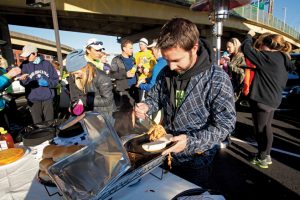 “I needed to lose baby weight,” says Audubon Avenue resident Deb Doyle, a runner for 20 years who got back into it three years ago to increase her fitness level. “It’s just nice to not have to do it alone. The group has really become a family.” Since her return to the sport, she has run five half marathons (this May will be her third Pittsburgh Half Marathon), all of which she did with the help of the Fleet Feet marathon training group.

“I wouldn’t have ever done this much without being part of the group,” says Brett Satterfield, a runner for 30 years whose 7-minute-mile served him well in the Columbus Marathon this fall thanks to the friendships he cultivated training with Fleet Feet. Running the many hills of Pittsburgh also jacked up his fitness level so the relatively flat topography of Ohio was a piece of cake. “I definitely finished with a better time and got into it more because of that.”

He also is grateful for the safety advice he received, such as constant reminders to stretch and use foam rollers to work out the kinks, which he believes helped him stay injury free for a while.

Harr appreciates the way Shooer has merged entrepreneurship with community spirit to help people do what they never thought they could: “He takes ordinary people and makes them into marathoners.”

For more information: www.fleetfeetpittsburgh.com. To register for the Pittsburgh Marathon: pittsburghmarathon.com.