ehind the houses on the other side of Adeline Avenue, where I grew up, was an irresistible enticement: an alleyway that ran through the entire block, effectively creating a whole world for a grade schooler.

It was a street that was kid-sized. No traffic beyond the occasional car backing out of a garage. A perfect place to play hide and seek. Kids drifting in and out of the yards, plus an assortment of dogs and cats. There were backyards where teenage girls worked on their tans and moms hung up the wash.

This, of course, was in the ’60s when children were allowed to play outside with few restrictions.

Our alley was called “Straight Way.” A block away is a similar alley, labeled “Rural Way.” A 1905 map of Mt. Lebanon show them neatly bisecting the blocks between Spruceton Avenue and Hilf Street, but both of them peter out into footpaths on the Spruceton end.

These alleys served houses built between the age of the horse and the automobile, when attached garages were not yet the norm. Instead, detached garages were built behind the backyards with easy access provided by the alleyways that ran through the blocks. Alleys don’t have houses fronting on them, the way a number of lanes in Mt. Lebanon do. They only provide garage access, safe places for kids to play, and cut-throughs for pedestrians.

Here then, for those who love little-known nooks and crannies, is a guide to some of Mt. Lebanon’s most notable alleys:

runs parallel to Academy Avenue and Shady Drive West, with access from Mapleton Avenue. There’s a friendly feel to Darby, with its open garages, backyard gardens, and basketball hoops. Lucy Young Fitzgerald, who has lived on Shady Drive West with her family since 2003, reports that the neighborhood has long had an “open shed” policy, sharing lawnmowers and gardening equipment between homeowners. “It’s always promoted closeness and community among us,” she says.

Joe Tighe lives on Academy with his wife, Elizabeth, both teachers at the high school, and their 11-year-old daughter. He values the relative peace and quiet of the alley: “Things slow down back here.” He also notes that there are vestiges of Darby Way a few blocks further along, off Marietta Place.

Another high school teacher, Dawn Davenport of Shady Drive West, credits Darby Way with enabling her two daughters, now 18 and 27, to have a “traditional” childhood. “There were gangs of kids out here all day long, on pogo sticks, riding bikes, playing hide-and-seek,” she explains.

“They completely lived back here. It was a place to learn everything you needed to know as a child.”

is an oasis of flat amidst the inclines of Sunset Hills. Stairs seem to be the prominent theme here: down to the houses that front on Castle Shannon and up to the houses on Tampa. Ross is relatively wide and paved with yellow brick. Several of the garages match the architecture of their houses. Many yards along Tampa slope fence-free down to the alley, giving an alluring glimpse into the family life that takes place on its decks and swing sets.

Tampa resident Annie Skiba reports that happy hours and other social events are frequent occurrences among homeowners on the alley. “It’s a nice little gathering place. Everyone knows everyone else,” she says. “If a car goes down the alley that’s not recognizable, you notice it.” She is grateful that Ross serves as a safe place for kids. “You hear them playing basketball back there and riding bikes. For the people on Castle Shannon, it’s really the only street they have.”

Debbie Eichenlaub knows this all too well. She grew up in the house on Castle Shannon where she and her husband, Bob, now live. Debbie has deep roots in the neighborhood: her parents lived in that house, and her grandmother also lived on the alley’s Sunset Drive end. Bob loves the alley, but hates all the stairs. “You have to have a strong heart to get out and around in this neighborhood.”

may just be the most elegant Mt. Lebanon alley. Smoothly paved and lined with a drainage ditch, it runs behind the houses on Washington Road, starting just below Terrace Drive and exiting 19 houses farther on. Residents use Speakmans as the de facto entrances to these houses, since it is impossible to park out front. Some of the garages sport lovely architectural details that match their houses. The alley’s other side is lined with gates, walls and stairs from the backyards on Navahoe Drive. There’s even a set of stone benches to rest on, next to a handsome sundial.

Homeowner Rina Ugrin has lived on Speakmans for three years with her husband and 18-year-old daughter. She says the alley is a community link between the houses and has been the site of block parties. “It’s nice to have a quiet place back here away from the traffic of Washington Road,” she says.

is a twisty alley that descends steeply from McCully Street, turns left to a flat stretch, and then goes right and dives down to Royce Avenue. Because of the difference in terrain, houses on McCully tower over this well-paved alley, while the yards behind Royce are relatively flat.

Longtime Mt. Lebanon resident Elaine Wertheim grew up on McCully Street and fondly recalls playing on Arlin Way: “It was just ‘the alley’ to me and my friends. We were lucky because the rough pavement was hilly enough for challenging bike rides and bumpy roller skating. On one side expansive sloped backyards provided an even bigger arena for fun. On a recent walk I ventured down the alley from McCully Street to Royce and was greeted by three little girls riding scooters. It’s good to see some things never change.”

starts on Magnolia Place, crosses Baywood Avenue, and continues on to Atlanta Drive, along the backyards of Mabrick Avenue. The Magnolia block is bumpy and pitted, while the other block is nicely paved; both provide access to parking and garages for the houses and apartments along these streets. One resident mentioned the alley off Atlanta as the common area for kids to learn to ride their bikes.

Mabrick homeowner Sarah Trau has lived along the Magnolia leg with her family for three years. “There’s a fair amount of traffic on our block of the alley,” according to Trau, “with people parking and pulling in and out, but walkers also use Baton as a cut-through to town.”

Former Mabrick Avenue resident Sally Schreiner recalls sledding down Baton as a child. “We would sometimes wait till Dad had come home from work and ride in the dark with the sparks flying from the friction of the metal sled runners hitting rocks. Exciting!”

starts off Cochran Road and parallels Bower Hill and McCully Street, a quiet oasis amid the traffic of the nearby intersection. Although the pavement is crumbling, the alley is flat, as are most of the pleasant backyards and driveways that flank it. Garbage cans, a few of them in specially designed enclosures, dot the roadway, which doesn’t connect anywhere but culminates in a grassy plot.

and Rural Way, unmarked, go between Spruceton Avenue and Hilf Street and for a short way on the other side of Hilf. Straight Way is in the block below Adeline Avenue; its little sister, Rural Way, is off the lower block of Hilf. Both of them are private alleys, meaning residents are responsible for upkeep. Both of them have old-school charm; my old hangout, Straight Way, reminds me of a country lane overhung with old trees in spring bloom and lined with hedges.

Shelley Harnett and her husband, Mt. Lebanon Commercial Districts Manager Eric Milliron, have lived on Adeline with their daughter, Sylvie, 12, for seven years. They prize the quiet of the alley and the safety it affords the neighborhood children. “The potholes are hard on the tires, but the kids love it,” says Harnett. “Oh, and so do the bunnies. We always have a lot of bunnies back there; I even have a sign that says ‘Bunny Trail.'” 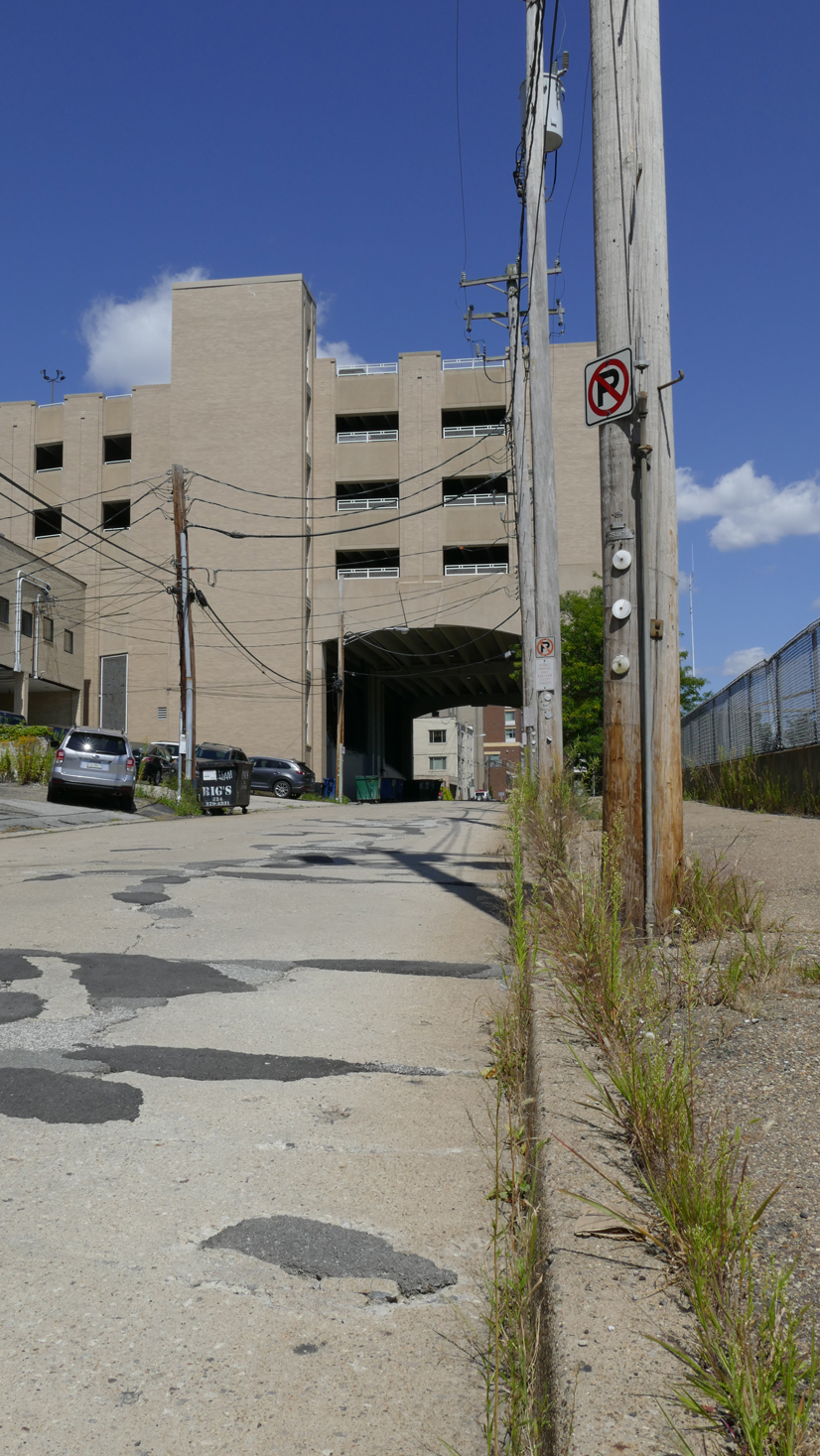 Behind the Denis Theatre and running alongside the light rail tracks over to Shady Drive West, Parse Way has been identified as a potential pedestrian corridor that would enhance our business district as well as provide a more welcoming portal for riders getting off the T. “Mt. Lebanon Destination Uptown,” the 2019 report from the Mt. Lebanon Economic Development Office, recommends upgrading this alley “as a multi-use, pedestrian-oriented space that activates the rear side of Washington Road businesses.” Upgraded light poles, benches, plantings, and signage, as well as improved plaza and stair connections could make that happen.

Calling Parse Way a “hidden gem,” the report also suggests installation of public art, lighting, and signage to create a safe and pleasant connection to the transit stop; consolidation of “back of house functions,” so that businesses could use Parse Way as a second front door; and creating a safer crossing to Clearview Common so that the park there could be more fully accessed.