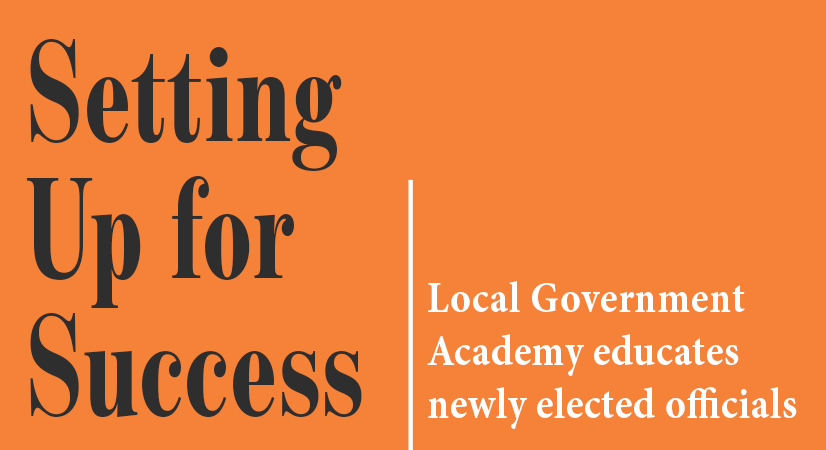 aybe you’ve always wanted to get involved in local politics. Or maybe there was one issue that moved you—field space, property assessments, maybe traffic safety. Whatever the reason, you circulated the petitions, got yourself on the ballot, ran a great campaign and notched a win on election night. So … now what?

The Local Government Academy (LGA), a nonprofit dedicated to maintaining high standards in all aspects of local governance, was established in 1983, as a result of a study commissioned by the Allegheny Conference on Community Development, which found excessive fragmentation in local and county government across the region was causing friction and decreasing productivity. One of the LGA’s first programs, launched in 1984, was its Newly Elected Officials Course, designed to give new leaders a handle on all the ins and outs of small-town governing.

As a general rule, locally elected officials are not experts on how government functions and it is a steep learning curve.

This year, Mt. Lebanon welcomed three new commissioners: Mindy Ranney, Leeann Foster and Andrew Flynn. All three took the 2019-2020 course, which stretched over six Saturdays, beginning in November 2019 and concluding in February of this year.

The full course costs $450 per official, or $75 for just the opening day overview. Officials from financially distressed communities receive a reduced rate of $225 for the course.

The course begins with an introduction and overview, and includes seminars on powers, duties, budget and finance; human resource and emergency management; infrastructure and public works; planning and intergovernmental cooperation; and communication and ethics.

This year’s class drew close to 100 attendees, mostly from Allegheny County, but with officials from towns in Beaver, Crawford, Washington and Westmoreland counties as well. Joy Ruff, the executive director of the LGA, says it’s the largest class of new officials the academy has taught. She believes the class is essential for first-time officials.

“The elected officials are making a big commitment—six or seven Saturdays is a big chunk of their time. But there is a definite need to for this course,” she says, “not just for effective governing, but also to protect the municipalities.” If new commissioners or council members are not aware of their limitations and liabilities, “it can cause lawsuits, and possibly even criminal charges.”

Flynn has worked extensively with state and local governments both with BNY Mellon and with his financial management company, Aquorn, and he is aware of the operational and legal variations from place to place.

“As a general rule, locally elected officials are not experts on how government functions and it is a steep learning curve,” Flynn says. “The legal, regulatory, operational, and financial frameworks that have been established to meet the unique needs of government can be daunting. The LGA provided me with the background that is unique to our commonwealth that I needed to quickly perform my role as commissioner.”

One of the added benefits of the course, which this year rotated locations to include Cranberry Township, Penn Hills, the Allegheny County Emergency Operations Training Center in Moon, the Community College of Allegheny County campus in McCandless, and Robert Morris University, is the networking opportunities new officials have.

“People get the chance to see various facilities, and meet representatives from similar communities who have the same issues,” says Ruff. “And they hear from experts, people who are in the trenches every day. That’s a very useful resource they can take with them after they finish the course.”

The course instructors, all volunteers, are drawn from all facets of local government. Some are themselves elected officials, from communities as disparate as Brentwood, Penn Hills and Wilkinsburg, while others are attorneys and engineers with long experience in local government matters. Many of the instructors are municipal staff, including three from Mt. Lebanon: Municipal Manager Keith McGill, Finance Director Andrew McCreery and Public Information Officer Laura Pace Lilley.

McGill taught a session on best practices for municipal meetings, providing a comprehensive overview of both the legal requirements as well as real-world examples and recommendations about how to run an effective and informative public meeting.

“Local government is the most impactful and responsive level of government…

“When you make the decision to run for office and become an elected official in the community that you call home, you become part of something bigger,” says McGill. “Local government is the most impactful and responsive level of government. Its effectiveness is in large part determined by the elected officials who set policy, allocate funding and provide direction to municipal staff. The Newly Elected Officials Course is a great introduction to all aspects of local government and provides a solid foundation for officials to build on.”

Foster valued the networking opportunities and the chance to exchange ideas with representatives from other communities. She thinks the course could be more effective if it were split into two tracks.

“Overall, this has given us such a good introduction, and as we get more experience, I think a secondary course would be really great,” she says. “Something that goes beyond the minutiae and more into vision and process, to help with goal setting and priorities. Goals are easy to set and hard to achieve.”

Flynn is already seeing the benefits of making connections through the course.

“As the COVID-19 crisis came upon us, the relationships we developed during the LGA proved invaluable as we worked to quickly adapt to the changing needs of our residents and the municipal team,” he says.

As Ranney progressed through the course, she was pleased to see that Mt. Lebanon was often in the forefront of best practices.

“It felt like, in many cases, Mt. Lebanon is the standard everyone explicitly or implicitly adheres to,” she says. In a presentation by Clyde Wilhelm, Swissvale’s borough manager and fire chief, Ranney says he was effusive in his praise for our fire department achieving the highest possible rating—Class I—from the Insurance Services Office, one of only about 60 communities nationwide to receive the rating.

“All the factors that went into getting the recognition, everything from response time to preventive maintenance to outreach, it just reinforced for me how exemplary our community is,” she says. Ranney was also impressed by the level of training Mt. Lebanon police officers receive in comparison to other communities.

“I feel like I’m in an ideal position to do my job because of our highly trained and experienced staff,” she says. “I learned that, while we can’t solve every problem, we can give our residents educated reasons why some things can’t be done,” says Ranney. “This course makes me feel like I’m set up for success.”