“No computer is ever going to ask a new, reasonable question. It takes trained people to do that.” -Grace Hopper

Grace Hopper (1906-1992), inventor of one of the first programming languages, believed that computers would someday become great problem-solving tools for those who learn to use them. Little did she know a small group of preteens at Mellon School, all under the age of 15, would be using computer code to solve everyday problems by the year 2018.

At the last meeting of last year’s Girls Who Code club at Mellon School, club leader Anne Connell presented each girl with a process book—a notebook that tracks the progress of a project from beginning to end.

“Now you can write down any coding snippets that you know you will need to keep with you,” Connell told them.

The five girls rifled through their books, murmuring words of thanks and promises to take the gifts to the two who were absent. All of the girls plan to return next school year, including those who are moving on to the high school.

“Each of them has helped to shape what next year’s curriculum will be,” says Connell, “And the girls who go to the high school are welcome to come back for a ‘drop in’ when they need it. They can come back when they get an assignment that they need to build, or even when they find something that they like the idea of working on.”

Which is exactly how Connell structured the class—so that each girl can pursue a project that interests her, rather than a series of presentations and assignments. Many of the students were so excited about this year’s coding projects that they plan to improve them over the summer and during the next club session.

Connell, Cybersecurity Engineer at SEI-CMU who teaches at CMU’s Heinz College of Information Systems and Public Policy, decided to start the club because she saw a need for an in-depth approach to coding for girls in middle school. Connell has two children: Mary is entering sixth grade and Christian is entering eighth grade at Mellon, and she was happy to work with her contacts at the school to start a club that would fill that need.

Connell had to work closely with Mellon principal Christopher Wolfson and become certified through the national Girls Who Code program. According to the official website [1], “Clubs … are led by facilitators, who can be teachers, computer scientists, librarians, parents or volunteers from any background or field. Many Facilitators have NO technical experience and learn to code alongside their club members.”

Obviously this wasn’t the case for Connell, who has a full resume of tech and coding experience, but the national program offers resources, including webinars, trainings and real-time support, plus curriculum tools, for anyone interested in starting a club.

In the upcoming 2018-2019 school year, Connell is aiming to begin club meetings in October, with a focus on core coding concepts. Unlike the national group, Connell encourages any student, regardless of gender, to sign up—as long as a student is engaged by the material, they will probably enjoy the club. But she continues to be motivated by the organization’s mission to close the gender gap in technology.

“Understanding is absolutely a key tenant of this,” says Connell. “We don’t just want to give them something and ask them to point and click. We want them to be comfortable in the professional world. To be able to contribute to a conversation, as an adult, working in a field that is predominantly men … it’s empowerment so that they can be part of the conversation.”

From Winter Guard, the high school’s indoor color guard team, to ticket finders to Net Neutrality, the projects are as different as the intelligent young women who chose them.

Project inspiration: “I want to create the best way to get tickets for events. I came up with the idea when I was looking for concert tickets for my favorite band, BTS, and I was stressing about whether I would actually be able to get them.”

About the project: “My site takes you to the best page for buying tickets, after comparing by price. I have it organized into different events for different audiences. I even have cultural events, too.”

Challenges: “It took a while to do the research and find all the pages … formatting is also a challenge. If you mess up the formatting, things get pretty wacky.”

Project inspiration: “Ms. Connell helped me come up with the idea. I was saying that [kids my age] need a place to go to see all of the activities that they can do each day during the summer.  So I’m creating a place to list all of the summer activities in Mt. Lebanon.”

About the project: “I’m still working on it. Still trying to look for events and update the site … it’s been really fun to do this because I’m always learning new things.”

Challenges: “I started a little later than everyone else … I didn’t even know the club existed! My mom just told me that she got an email about the club and that I might be interested … I will be doing it again next year.”

Project Inspiration: “It started with a U.S. History assignment, where I wrote to the FCC about Net Neutrality. It made things easier, because I just took all my sources from before and just added them to my website.”

About the project: “My site lists resources about Net Neutrality—what it is and what it’s used for. I knew from day one that this is what I wanted to do, because I got to apply what I knew, while seeing a bill [being debated]. It’s neat because it affects everyone.”

Challenges: “No matter what happens, it will still be relevant and debated on. I think it is still worth working on this.” 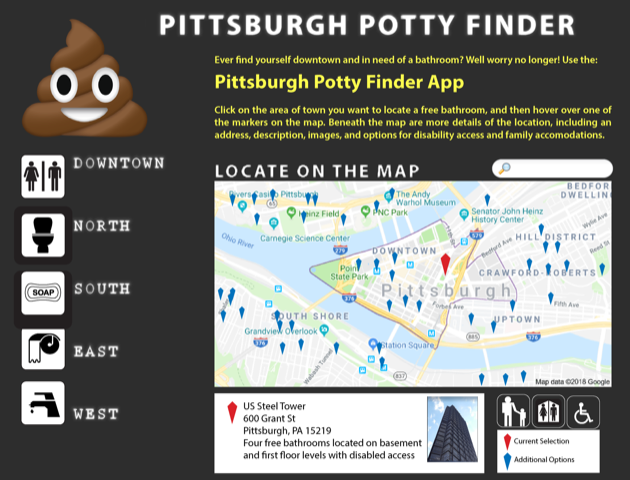 Project inspiration: “It all started when we were downtown, and we couldn’t find a bathroom. So we came up with a map of different bathroom locations … It was really fun to work with a friend on this idea.”

About the project: “We used HTML code and inserted locations on a map. So you click on your location, and then you can look up all the locations near you … we used a lot of different programs. The computers all have Dreamweaver, but we even used Photoshop to create our logo—the logo uses the poop emoji.”

Challenges: “The research and gathering of all the information was the hardest part. But once the research was done, it only took us about five [club sessions] of building.”

Project Inspiration: “Everyone seems to think Winter Guard is Capture the Flag or something … so I’m hoping to raise awareness about Winter Guard and what we do.”

About the project: “My website will advertise Winter Guard and our events, like our Breakfast with Santa that we do every year. It also covers videos, pictures and other info. Mt. Lebanon actually does not have an official site for all of this.”

Challenges: “I know the HTML basics, but I have some ideas that will be hard. I hope to continue this project, though, because I feel like this is something that is really needed.”

Click here [4] for a related story about the Coding Gals club at the high school.