In his daily struggle to keep up with all the opportunities for new knowledge that technology offers, my husband had one of those snazzy video doorbells installed at our front door at the University House at UC San Diego.  Then he downloaded the software to his phone, sat in his chair with his eyes glued to the camera, and waited for all the doorbell ringing that was about to happen.

“This is great!” he told me.  “You need to download this app.  It tells you everything!”

“Or I could just answer the door,” I said.

This was no basic doorbell camera; this particular model had a motion sensor, so not only did it send an alert to my husband’s phone to let him know that someone was ringing the bell, it vibrated like crazy every time someone opened the door–or even so much as came near it.

So that night while we were at a fancy dinner listening to long speeches, our daughter Nina at home got hungry.  Nina opened the front door to go out for food, and my husband’s cell phone started vibrating violently on the dinner table.

“Where is she going?” he hissed.

“How would I know?” I said.  “I wasn’t the one who bought all upgrades in the brochure.  Doesn’t the app tell you anything?”

So he dialed Nina’s cell phone and asked her.

“You’re spying on me,” she accused.

“I’m protecting the house,” he assured her.

“Then you should have been hiding in the bushes with weapons instead of dining with white table cloths and drinking wine,” she corrected.  “I don’t like your new toy.” 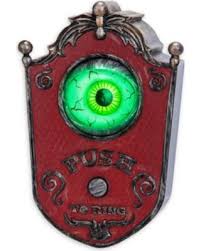 Half an hour later I heard the phone vibrating again and my husband elbowed me during another speech.  “Look at this,” he whispered.  “She went to Five Guys.  Is that bag full of fries?  Is she going to eat all those fries by herself?”

So he called Nina and asked “Did you get large fries?”

Over the next few days my husband watched our comings and goings.  He knew when the dry cleaner dropped his suit jacket on the ground, he knew that I got a package from Nordstrom (and it spawned a lot of unnecessary questions), and he knew when a giant raccoon inexplicably sat on the doormat for three minutes.  Since we live and work at a university, knowledge is everything.

Then one afternoon, my professor friend Emily stopped by to drop off a few things.  I quickly pulled her into the house and slammed the door closed behind her.

“That’s his doorbell camera,” I pointed.  “He watched you come in, and now he’s watching for you to leave.”

So I made her leave through a side door to evade the monitoring because the Nordstrom inquisition had already involved more information than I had planned to share.

The next day another faculty member came by, and I made her also leave by the side door.  This went on for days, with all sorts of people coming into the house and then exiting another way so as not to be captured on camera.  For anyone monitoring the activity at the front door, it looked as if people came into the house, but no one ever left.

My husband was having fun watching his doorbell camera and I was having fun inviting people over for lunch, coffee, cocktails…I also baked delicious things and asked people to come to our house to pick up gifts.

He knew everything that happened at our front door.  Once, he watched me struggle to unlock the front door with a large pizza box balanced on my hip and a drink in my hand, and he watched Nina’s friends go in and out when we were not home.  But he never said a word about the mysterious comings and goings of his faculty members.

One day as I went out the door, I looked into the camera and gave my husband a big smile and wave.  I knew he would probably ask me where I was going and why I was so happy because the app doesn’t fill in those pieces of information.

Instead, I got a phone call from Emily.

Emily had been in my husband’s office when his phone started vibrating, and they both saw me smiling and waving.

“That’s pretty cool,” she had said to him. “So can you watch people coming and going at your house all day long?”

He looked at her straight in the eyes and said “Yes, unless they leave through the side door.”

Soon after that, the camera died and no one knows (and the app doesn’t tell) how to change the battery.  Now we don’t know if raccoons sun themselves on the doormat or if the dry cleaner blows his nose on the dress shirts, but frankly, it doesn’t matter.  Knowledge isn’t everything; in fact, there are some things that we are happier not knowing.