On July 11, New Orleans resident Bob Tucker, 50, a loss prevention specialist, was in town for a week on business, staying at the Hampton Inn in Green Tree.  A former college football and baseball player, he’d been working out hard for the past two months, had lost 20 pounds and was feeling the best he’d felt since college. That Wednesday, after a rigorous workout at the hotel’s fitness center, he began to experience shortness of breath and then chest pain.

When the symptoms didn’t subside, he went down to the hotel’s front desk and asked if the shuttle could take him to the nearest  hospital (the clerk said it was Allegheny General), but the shuttle was 15 minutes away.  The  clerk asked if he wanted an ambulance, and he said “No, thanks, I could probably drive myself.”  He started to search for direction on his phone, and the last thing he recalls is saying, “Call 911,” before collapsing and becoming unresponsive.

The hotel staff started CPR. MRTSA was on the scene within four minutes, used the AED and got a pulse fairly quickly, says Jesse Siefert,  MRTSA’s deputy chief of administration.  Paramedics Dave Englert, Norm Feehan and David Terkel  transported Tucker to St. Clair Hospital, using the latest technology en route to transmit his EKG to the Emergency Department, showing he was having a heart attack. This allowed the hospital to activate the cath lab and cardiologists, saving valuable time.

Cardiac catheterization showed Tucker as suffering from 100 percent blockage of the left anterior descending artery, often called the “widow maker.”  A stent was inserted to clear the artery and within a hour of arriving at the hospital, Tucker was out of the cath lab and into recovery. His wife, Heather, flew in the next day and Tucker was released from the hospital July 13, feeling good enough to celebrate a 23rd wedding anniversary dinner at Monterrey Bay Fish Grotto.

MRTSA responds to about 800 calls a month, 15 to 20 of which are cardiac related.  All the outcomes aren’t perfect, but this call went  as smoothly as any paramedic or patient could hope—and everyone was thankful. “Mr. Tucker’s outcome is testament to the cooperative and innovative care provided by MRTSA and  St. Clair Hospital,” Siefert says. “We encourage everyone to learn CPR and have seen again in this case how significant bystander CPR is to full recovery.

“Guys, I’m alive because of you,” Tucker,  father of two, told the MRTSA staff in a letter after he returned home.   “I have miles to run, charities to earn for, others to help. Thanks to you guys I can now pay it forward.  None of this would be possible without your efforts.  I owe the opportunity to have a ‘rest of my life’ to you guys. Do me a favor and tell your kids, your wives, girlfriends, moms and dads that Bob Tucker says you are a hero.” Tucker  also credited  cardiologists James Marcucci and Dave Burkey for the excellent care he received at St. Clair.

And he made a promise:  “I’ve become a decent cook over my 29 years in Louisiana being tutored by my wife and her sisters and with cookbook lessons from John Besh, Emeril Lagasse, Paul Prudhomme and John Folse—none of which I rival, but I hold my own.  I plan on cooking a meal to knock your socks off when I return; count on it”

Last Friday he did just that, spending eight hour at MRTSA’s Cypress Way headquarters cooking a Bayou-inspired dinner for 15 that included, among other things, shrimp bisque, Cajun salad, grillades and grits (often called Louisiana Brunch) and bananas foster. “It was reciprocal appreciation,” says Siefert, who doesn’t recall any such elaborate gesture of thanks in recent years.  “We told him over and over how much we appreciated him taking time do to it.” 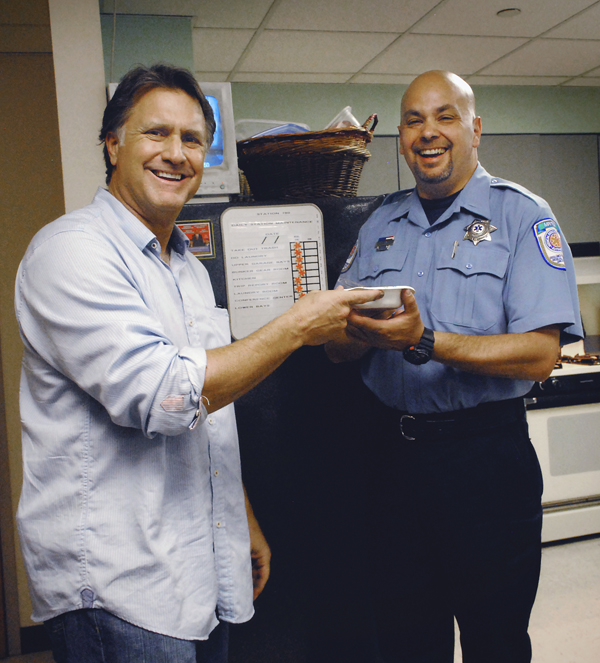 —Sadly, 70 percent of Americans may feel helpless to act during a cardiac arrest emergency because they do not know how to administer CPR or their training has significantly lapsed.  Effective bystander CPR provided immediately after sudden cardiac arrest can triple a victim’s chance of survival, but only 32 percent of cardiac arrest victims get CPR from a bystander.

To learn more about MRTSA’s CPR classes or to register for one online, visit http://www.mrtsa.com/#/education