When Ryan Mori sets up his camera, it’s to step in front of it….not behind it. The finished product will be a two-minute humorous look on life from his perspective. He is the cameraman, producer, talent and editor of That’s So Ryan, the video series launched by the Washington Road resident on Facebook early in 2015.

There isn’t any dialogue in Mori’s videos, at least not spoken dialogue. Mori was born deaf and uses American Sign Language or ASL to communicate. He’s gaining a following on the social media site among the deaf and hearing. In his most popular video, “St. Patrick’s Day,” Mori eagerly follows a rainbow looking for the proverbial pot o’ gold, pauses to show off a few Irish jig steps and nearly misses the turn in the road before discovering a curious treasure. His videos are cleverly thought out and inspired by, well, just about anything he sees.

“I’m always thinking about the next video. Ideas pop into my head when I’m driving or working and I’ll write them down. My mind is always going,” says Mori, 34, who works at St. Clair Hospital in the Environmental Services Department. He finds fresh material from holidays, family experiences, events and just the mundane.

Mori is a graduate of the National Institute for the Deaf, a college of Rochester Institute of Technology, where he earned an associate’s degree in art and computer design. He designed his logo for the Facebook page where his videos are posted.

What is “so Ryan” about “That’s so Ryan?” It’s his silliness and innocence mixed with a measure of physical humor and a splash of reality that viewers can identify with and chuckle, from struggling through his Monday workouts to mowing the lawn.

His comedy niche falls between slapstick and understatement. His facial expressions communicate awe, frustration, joy, contentment, shock and fear. And he’s been practicing for this role his entire life. 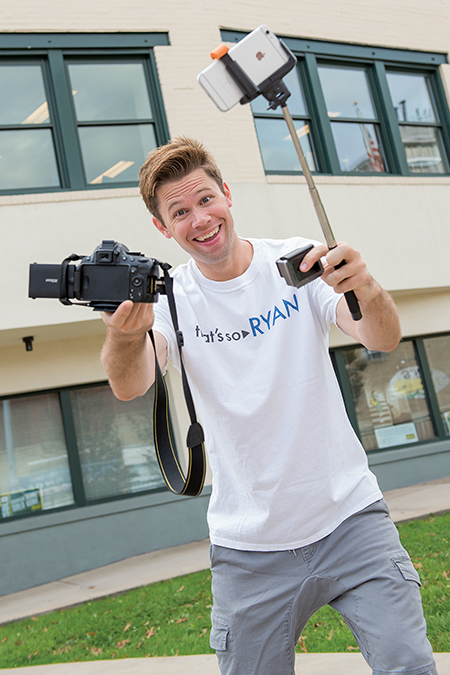 “She and I had a big age gap,” Mori says. “Being deaf, I used a lot of facial expressions, and that’s how we communicated with one another. It’s how the deaf communicate with each other so the other person can understand your meaning. It’s basically the tone. That’s our inflection to fill in the gaps.”

Those facial expressions were training ground for his new hobby. “I was always a jokester, teasing my friends,” Mori recalls. But it was at home with his family that he began imitating different characters and cracking up his sister and his parents.

“He was always a happy kid; always in a good mood,” his father says. He and his wife discovered their son was deaf when he was 10 months old. At first jolted by the news, says his mother, “We came to realize it didn’t change him; we just knew more about him.” They sought out the best resources for their son at the DePaul Institute, located then in Mt. Lebanon. His jocularity was apparent at an early age, according to his mom. “When he was two his teacher at The DePaul Institute told us he had an amazing sense of humor,” she says.

Mori learned lip reading while attending the DePaul Institute as a child and later picked up ASL during junior high in Mt. Lebanon. Both he and his sister graduated from Mt. Lebanon High School.

The spark that ignited his imagination came from his sister and a video she shared with him on the social media site “Vine.” The short, typically funny videos posted on Vine run in a seven-second loop. This particular video featured a deaf person using ASL.

“I was fascinated by that Vine video. I laughed for hours,” Mori says. “Then I thought to myself, I should do something like this. One deaf person in particular that I found through Vine, named Heidi, also has a following on Facebook. She and her ‘twin’ sister ‘Hedy’ have tons of videos and that got my attention. It made me think about being deaf and the things that deaf people relate to,” Mori explained.

Viewers get a glimpse into Mori’s world in one of his first videos about the replacement of his broken alarm clock. Because he can’t hear an alarm clock, he uses a “Sonic Boom” alarm that vibrates. The video resonates with others who are deaf and navigate common situations differently.

For his videos, Mori uses a camera and tripod mostly, but also has a GoPro for action and underwater shots. When he needs additional talent, he pulls in his dad, and his reluctant mom. Some of the exchanges between father and son are priceless: in a takeoff on Star Wars, both use the “force” to battle for control of the television remote; and during Christmas decorating Mori is left outside by his dad as yard display when he becomes hopelessly entangled in the lights.

His first videos have subtitles, but after quite a bit of thought, this spring Mori stopped using them. “It’s too much of a distraction to have the subtitles along with the sign language. For the person learning ASL, they are losing the benefit because they are reading the subtitles and missing the ASL. So I made the decision to remove them.” Mori says.

While it’s a hobby for now, Mori is encouraged by the response to the series and wants to see where it goes. In a world where there has been a great deal of pain and suffering, Mori reminds us, “Laughter really is the best medicine.”