Fifty years ago, Mt. Lebanon’s Blue Devil Marching Band was the first band east of the Mississippi to march in the Rose Bowl Parade. The trip—a huge source of pride for the entire community—was one of the first of many successes the high school music programs have achieved in the ensuing decades. In more recent years, some Mt. Lebanon ensembles have played New York City’s Carnegie Hall.

While school music curricula elsewhere in the country fall victim to budget cuts or understaffing, Mt. Lebanon School District prides itself on offering a multifaceted program that instills the love of music in young children and gives them the tools and proper instructional support to nurture that love.

“We have such a rich history here of having really strong music programs, going back to the 1950s,” says Doug Reichenfeld, a Mt. Lebanon band teacher who facilitates the elementary school instrumental program. Reichenfeld cites the district’s strong commitment to providing an adequate number of music teachers as one of the program’s strengths. “Small group instruction is the key component—that’s number one—because it’s so hard to play an instrument,” he says. “You need lots of help, especially at a young level.”

Mt. Lebanon’s young musicians get plenty of help. Five vocal teachers rotate through the seven elementary buildings, and beginning in first grade, every child attends music class twice a week for 30 minutes. Carol Froehlich, a music teacher at Hoover and Howe and the facilitator of the district-wide elementary vocal department, says these classes allow students to find their singing voices and learn how to keep a steady beat, among other basic music concepts. Two weekly sessions allow the teachers to introduce topics in one class and then expand on them in the next while the information is still fresh in the child’s mind, Froelich says.

“I just love seeing their faces light up with every new song that we sing,” she says. “It’s so much fun. There’s a lot of joy in teaching elementary music.”

In second grade, students begin learning about instruments in music class, but it’s the following year when the fun really starts. All third-grade vocal students learn to play the recorder, but everyone also has the opportunity to start learning a stringed instrument, which the students may try out at the end of second grade. (Fun fact: Stringed instrument classes are offered first because violins and violas can be made small enough to fit a child’s hands, whereas many wind instruments are too large and difficult for the younger kids to play.) Reichenfeld says nearly all sign up to play because they’re so excited about getting the chance to play an instrument.

In fourth grade, band is added to the mix, with students able to start learning a wind or percussion instrument. Reichenfeld helps them pick an instrument by having them listen to various tracks he keeps on an iTunes playlist. “What I want them to do is choose their new voice,” he says. “Band instruments have such unique timbres. Each one has a different sound, and what really causes a young person to stick with an instrument is if they love the way it sounds.” 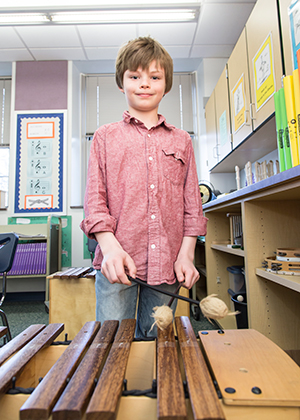 At this point, students can choose to stay on the stringed instrument track or jump over to band instruments. About half make the switch. Regardless of which direction they go, by the end of fourth grade, 80 to 90 percent of Mt. Lebanon kids are playing an instrument, Reichenfeld says, and nearly all of them continue in middle school.

Mt. Lebanon employs seven band and strings teachers who rotate among the seven elementary schools, with each teacher taking on small groups of students at two or three different buildings. Reichenfeld often works with just three students at a time, allowing each to truly hear a sound and how to manipulate it without being drowned out by other students playing. The PTA  supports the program with an instrument fund that provides an instrument free to any child who can’t afford to purchase or rent one.

The schools make sure students have the chance to see firsthand what they’re working toward. Second and fourth graders go to Heinz Hall for a Pittsburgh Symphony Orchestra performance, and symphony players (many of whom live in Mt. Lebanon) regularly visit the schools to demonstrate their instruments. Pittsburgh’s Civic Light Opera has performed for students on a number of occasions. Each building tries to hold at least two music-based cultural arts assemblies per year, which could range from a performance by the chamber music band Cello Fury to a laser light show. The schools also offer access to QUAVER, a full web-based music curriculum that augments the teachers’ lessons at school and at home.

This multi-pronged approach offers students every opportunity to succeed at music, which Mt. Lebanon educators say can be nearly as important as the basic subjects when it comes to expanding a child’s mind.

“We believe that early, quality experiences in the arts are essential to the development of every child’s skills and abilities,” says the district’s superintendent, Dr. Timothy Steinhauer. “For as long as we have been a school district, Mt. Lebanon has believed that an early exposure and early experiences in the arts have been one of the foundations of a quality education.”

Hoover Principal Nicci Giehll, facilitator of the elementary fine arts department, agrees, saying that the district is very focused on educating the whole child. “Certainly those academic areas—math, reading, science and social studies—are areas of focus,” she says. “But our children are much more than just those academic areas. Our community is very supportive of the arts, and so are we. We know that it really does help to create well-rounded students. There’s a lot of research out there that supports the arts in schools helping with student achievement in academic areas.”

Giehll says the music program gives students who might be strong at math or reading a completely different way to express themselves while offering those weaker in the core subjects but talented at music a chance to shine. She adds that committing to an instrument can teach children time management and responsibility, as they must get to their lessons on time, practice at home and care for their instruments.

The older the students get, the more opportunities they have to expand on their musical talents. Fourth-graders study music history and begin working with composition and improvisation. In fifth grade, students sing in the school chorus and have the opportunity to join the district chorus.

And although classes and in-school practice sessions may be great, it’s the public performances that offer the surest sign Mt. Lebanon’s elementary music students are excelling. The choruses perform winter and spring concerts and some have the chance to sing the national anthem before a Pirates game at PNC Park. The schools combine musicians into two bands and two orchestras, all of which have spring concerts.

“Suddenly, when they’re in this performance environment, you see a completely different side of the child—I just think that’s really powerful,” says Giehll.  “Without that opportunity, I feel like the kids would be really missing out on learning about that side of themselves.”

The elementary students bring energy to music class that is unmatched, says Reichenfeld. The goal, he says, is to offer a music program that measures up to that level of excitement and keeps the kids enthused about music as they head off to middle school.

“Mt. Lebanon has about the most comprehensive, well-staffed, well-known program, and we’re really proud of it,” says Reichenfeld.

“It’s just a great culture of music here, which is really good for the kids,” he says. “The idea is to keep this going for generations to come.”