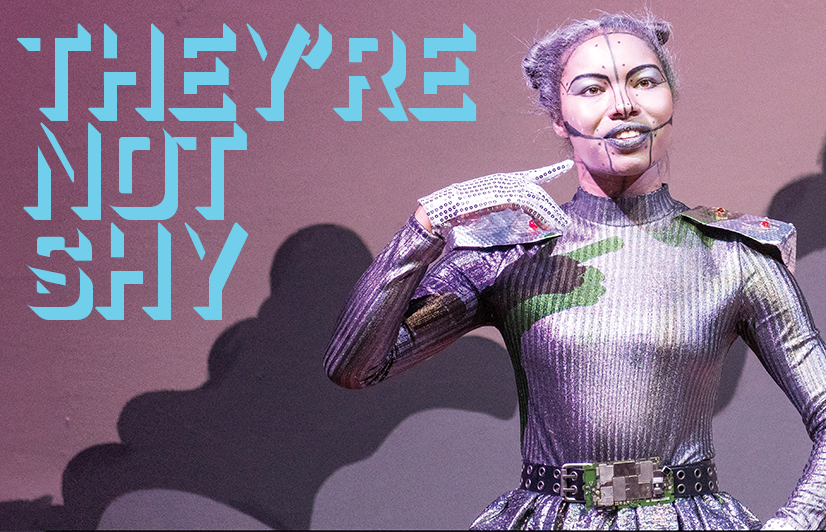 “I’m actually terribly timid and HORRIBLY SHY,” Carol Burnett belted at the top of her lungs in the Broadway premier of Once Upon a Mattress—and her own Broadway debut—in 1959. The audience laughed as she leapt, mimed, twirled and shouted about her character’s deep-rooted and debilitating bashfulness.

It’s funny because it is obviously untrue. At this point in Once Upon a Mattress, based on The Princess and the Pea, Princess Winifred, aka Fred, swims a moat, uses a rope to scale a castle wall and brazenly demands to meet her suitor. Seniors Lillie Tuck and Lindsay Ferreira will take turns wearing some Burnett-sized shoes to portray Fred in Mt. Lebanon’s production from May 7 to 9 in the high school auditorium.

“Once Upon a Mattress is very near and dear to our heart,” says Mt. Lebanon Theatre Arts teacher Jennifer Majetic, who is the stage director on the musical’s five-person production team. They chose the lighthearted comedy not just because it is notoriously fun, but because it will provide a departure from recent repertoire. “We knew we were looking for comedies this year after Annie and The Sound of Music, plus we wanted more opportunities for the ensemble, since last year it wasn’t featured as much.”

At least 100 students usually audition for the musical, and Majetic’s production team—Ethan LaPlaca, music director and producer, Douglas Reichenfeld, orchestra director, Cecelia Kapron, dance director and Gregory Kuhar, technical director—finds places for each of them. “A long time ago, they decided to have two casts. We want to give as many students opportunities as possible, so we double-cast every named character,” says Majetic.

Actors aren’t the only students getting real-world experience in the musical, however. In addition to dancing, The Mt. Lebanon High School Dance Company choreographs the entire show. High school instrumentalists can be part of the all-student pit orchestra. Soloists get individualized vocal training. Not to mention the behind-the-scenes opportunities for the stage crew, set designers and student theater technicians.

“Theater is one of the most collaborative art forms. It’s not just actors. It’s all these people putting together one piece of art to show an audience. These productions let students work with all kinds of people and build interpersonal relationship skills,” says Majetic.

She started teaching theater at the high school three years ago, after spending six years working as an actress and director in the region, including stage directing several productions at Seton LaSalle High School. These jobs made Majetic realize her love for teaching theater, so she decided to get her M.A. in education at the University of Pittsburgh.

“It seemed like destiny that this job was open when I graduated,” Majetic says. “Mt. Lebanon High School is special in that it offers so many electives to [fine arts] students. Plus, I get to direct and teach theater all day long—from the time I get here until the time I go home at night. That is the dream.”

In addition to the musical, which is entirely extracurricular and open to all students, Majetic directs the other two dramatic productions at the high school, which are open only to students enrolled in the Evening Theatre Company (ETC)—the capstone course of the theater program.

This year, Majetic instituted a new curriculum, including five semester-long courses. Intro to Theatre Arts is open to all high school students, and it is the prerequisite course to enter the program. Next is Principles of Acting and/or Principles of Directing, followed by Theatre Workshop, which provides students the opportunity to write, direct and star in one-act plays performed for other students during the school day.

“Mt. Lebanon’s theater program is unique in that there is something for literally anyone,”

“Mt. Lebanon’s theater program is unique in that there is something for literally anyone,” says Junior Oliver McCloskey, who has been involved in theater since he was a child and has been a member of the ETC for three years. He will play a leading role, Sir Harry, in the musical. “The different subsets—acting, directing, there is even a program for students interested in the stage crew and tech elements of theater—allow those who may not be interested in performing to learn more about and become involved in the art.”

The program culminates in the ETC, which is specifically designed for students who hope to pursue acting beyond high school. They can either enroll in the class after completing the previously mentioned curriculum, or they can audition to skip Intro to Theatre Arts—thus starting the class one semester early. The earliest a student can join the ETC is the second semester of their sophomore year.

The class culminates in a performance in the Fine Arts Theatre—the Fall semester production is usually in November and the Spring production is in March. This year, the shows were Shakespeare’s As You Like It, and A Wrinkle in Time, based on the 1962 Madeleine L’Engle novel of the same name.

“It’s entirely performance-based, so I teach about a show during class time, and then we rehearse the show after school. In As You Like It, for example, during the day we discussed Shakespearean language, symbolism, psychology. Then the evening rehearsal time was dedicated to staging it and working on different scenes,” says Majetic.

The ETC has 28 students enrolled this semester. They audition for their roles, but they are guaranteed to be cast—and Majetic often double-casts to provide more performance opportunities.

“Some people have been doing theater since they were kids, while others like myself only started in high school. We are athletes and musicians and artists, but also performers and actors who share the same passion for theater,” says senior Genevieve Chiapetta, a varsity swimmer, who recently played Mrs. Who in A Wrinkle in Time and has been a member of the ETC for two years. She hopes to enter college as a theater arts major in the fall.

In the three years she has been at the high school, Majetic estimates that six to eight students from each graduating class have gone on to study theater in college.

“There is a very strong opinion out there that actors and artists don’t eat. And a lot of parents don’t want to see their kids struggle as an artist. It’s a legitimate concern,” says Majetic. “At the end of the day, it’s about the child’s happiness and what their personality is like … [Theater] will fit the kids it’s meant to fit. The passionate ones. The hustlers. If that’s not your child, then I think your concern is legitimate, and we will work together to find a good solution for that.”

Regardless, the benefits of theater education are not up for debate: It helps build self-confidence, eases anxiety in high-stress situations, fosters a lifelong appreciation of the arts and increases empathy. These characteristics—which many of the fine arts share—align directly with the school district’s emphasis on mindfulness and providing lifelong mental wellness tools to its students.

Majetic says the Mt. Lebanon fine arts department is unique. “My first year was so eye-opening for me. I would walk down my floor and see kids working on complex visual arts. Then I would hear students harmonizing a cappella. Then in the next room, you see students working together on choreography, with the sounds of percussion practice coming down from the third floor … It’s just amazing. These kiddos are incredibly fortunate to have these opportunities.”