PARKING ASSISTANCE If you get the urge today to start holiday shopping Uptown, there’s a new way to find a convenient, available parking spot. Streetline’s Parker, an app that can be downloaded to your smartphone or tablet, launched here in September.

Here’s how it works: A chip embedded in the ground under parking spaces tells the software if a car is in the space. Download and open the app Parker, and see where the vacancies are. It’s easy.

Don’t have a smartphone? You can access ParkerMap, a widget on www.mtlebanon.org [1], to see the same info.

The project is the baby of the Mt. Lebanon Information Technology Department, and its manager, Nick Schalles. Right now, the spaces in the central business district on Washington Road are the only ones in the system, but Parker could be expanded in the future to include the garages. The software will list alternate parking spaces and prices, including those not on the chips just yet, so drivers can plan other places to go if the street is full.

Drivers aren’t the only ones to benefit. The system will make parking enforcement in lots easier and cheaper because the software also knows how much time is left on the digital parking meter. If there’s no time left but a car is parked there, the parking attendant can double check and write a ticket.

The municipality will also get reports that will document popular times and spaces. Local businesses also can advertise on the app and place the widget on their website so customers can see where to park.

The program is in a six-month trial to see how it works and if drivers like it. Other cities using the Parker app include Los Angeles, Indianapolis and Fort Lauderdale. 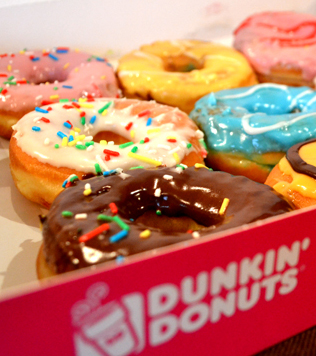 [2]DUNKIN’ DONUTS OPENING Will you be part of the Dunkin’ Tribe? That’s what the fans of the Massachusetts-based Dunkin’ Donuts are called. And now, Mt. Lebanon will be getting its own Dunkin’ on Washington Road at Connor, on the spot of the former BP.

Anthony Braun, CFO and COO of Pittsburgh-based Heartland Restaurant Group, which owns 32 Dunkin’ Donuts in the tri-state area (including the ones in Dormont and Bethel Park), says a group of Dunkin’ loyalists shows up at every store grand opening. We should look for them here when ours opens the week of December 15.

Before then, the store will undergo a complete renovation, to become the first to use Dunkin’s new upscale design concept, called Jazz Brew. A new storefront and outdoor patio seating with a roll-up garage door will grace the small building.

“We’re really excited about coming there,” Braun says, noting the high-visibility, high-traffic area is perfect for the brand. He says Heartland has been trying to locate in Mt. Lebanon for a while and the moment the BP closed “we were right there in line.”

Inside, the Dunkin’ Donuts will serve its full product line plus some new items you haven’t yet seen. The menu will include breakfast sandwiches, lunch and the full compliments of donuts and cold and hot coffee drinks. Right around the opening, Dunkin’ will be introducing its dark roast coffee. Hot chocolate and Keurig cups will also be available for purchase.

Since it’s slated for a holiday opening, the shop will have holiday baskets for sale and Braun says the store will roll right into its “Season of Chocolate” Valentine’s Day offerings of heart-shaped donuts, and special flavors such as white chocolate.

It looks like the store will be open from 5 a.m. until at least 10 p.m. or later, but those details were still being worked out at press time.

Braun says the Mt. Lebanon store will employ between 25 to 30 staffers, although they’ll have around 40 people helping when the store opens, making thousands of sample donuts until they make sure they get it just right. Systemwide, Heartland employs about 850 people. Which is a big improvement from the time that it was just that one guy.