AN ARTS COLLABORATION  Over the last eight years since it opened at 691 Washington Road, the 200-plus artisans at Koolkat Designs have filled the tables and shelves with jewelry that sparkles, artwork for that perfect spot and gifts for the most finicky of birthday girls. But owner Kate McGrady had long been looking for somewhere larger, where the crafters could spread out, teach a class or two and demonstrate their skills. Some good stuff to eat and even a performance space would be great too.

Enter Bob, Chuck and Doug Satterfield, owners of Rollier’s Hardware, a fourth generation family business. They own the landmark red barn at 1635 McFarland Road, which once was an A & P but became Rollier’s in 1953. After Rolliers moved to Washington Road in 1994, the old store housed a day-care center, and later, a hobby shop.

Add in Koolkat’s creative director, Kate Wagle Hitmar, and you have a five-person partnership set to create the Artsmiths of Pittsburgh, a 10,000-square-foot arts center set to open in the spring after significant renovations inside and outside the building. Berryman Associates Architects of Shadyside is working on the design, and TedCo is the construction manager.

It’s more than just a business venture for Doug Satterfield, who has been working in ceramics at Dan Vita’s Fireborn Studios for as long as Koolkat has been open. He’ll be one of the working artists.

The building’s first floor will have a showroom, a café (that will include, after a tricky move, the current well-known Koolkat Designs sign from the store’s façade), fresh coffee and food supplied by Larry Lagatutta of Enrico Biscotti and performance space for live events. The downstairs will offer another showroom, a gallery for more exhibits and a teaching area.

McGrady plans some edible art outside, in the form of space to host food trucks, farm stands and outdoor dining.

When mtl announced the project on October 20 on its Facebook page, hundreds of people showed their excitement and said they welcomed the idea and would support it wholeheartedly.

Koolkats is planning holiday events to say goodbye to Uptown. www.koolkatpgh.com [1] or find them on Facebook. 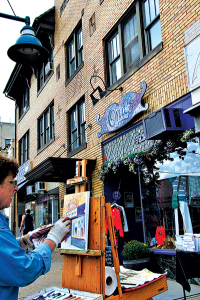 PLEIN AIR RECAP Beautiful weather and even more gorgeous art highlighted this year’s Plein Air Mt. Lebanon, a neighborhood arts festival. The weeklong festival, sponsored by the Mt. Lebanon Partnership and held in October, was a fundraiser for the Mt. Lebanon Arts Initiative, which provides grants for art projects around town. Patrons bought 43 paintings.
The painters, who spread out through Mt. Lebanon and city neighborhoods, receive 60 percent of each painting sold. Ellen Gavin of New Jersey won $3,000 for her first place painting of an Oakland street scene.
Partnership member Steve Denenberg, who chaired the Artists Market, a two-day sale of handmade artwork, jewelry and gifts, said the market grossed about $15,000. The second Tour de Mt. Lebanon bicycle ramble, which concluded Plein Air, had a record 71 riders. Total revenue still was being tallied at press time, but preparations already are under way for next year’s festival.

CHANGES AT JOSE AND TONY’S Jose and Tony’s Tex-Mex (and Italian!) restaurant, 1573 McFarland Road, has kicked the can down the road—as in, it has ditched the canned and jarred sauces and processed food in favor of a fresh overhaul of the menu, the first such update since it opened in 1969, says manager Kyle Johnston.

Owner Shawn Bernarding, who has been proprietor since 1998, thought it was overdue, after the closure of several local Mexican restaurants and the immigration of many Spanish-speaking residents to the Southern suburbs, near the restaurant. Jose and Tony’s has loyal customers who’ve been coming for decades, but Johnston says they just weren’t coming often enough.

The first step was the hiring of new chef Jairo Organista, who retooled everything on the menu. He makes everything fresh—from the guacamole to the tortilla chips to the queso dip–instead of far in advance and kept warm.

A few menu stalwarts, such as the California burrito, chicken wings and the no-bean chili are still available but everything else, including nine flavors of burritos on 14-inch tortillas, are made from scratch with new ingredients.

Dishes are available with shrimp, chorizo, tilapia, chicken, steak and pork. Enchiladas, salads and tortas round out the selections.

A full bar is available, including signature margaritas in traditional and assorted flavors.

What has the redo done to prices? They may be a little bit higher, but the quality is better and the portions are larger, says Johnston.

The restaurant has specials for home sporting events, with flatscreens throughout the facility, and a happy hour from 5 to 7 p.m., Monday through Friday. A kids’ menu is available with such items as quesadillas, chicken fingers and tacos. Jose and Tony’s is open 11 to 11, Monday through Saturday and 1 to 9 p.m. on Sundays. 412-561-2025, www.joseandtonys.net [4]