FIRST FRIDAYS As soon as the weather breaks and the work week is over, we start thinking about a Friday evening party. Mt. Lebanon’s Friday party tradition is First Friday, the first Friday of every month from 7 to 10 p.m., starting in June. While Commercial Districts Manager Eric Milliron is still busy signing contracts, he says his goal this year has been to crank up the quality of the music. The June party will feature local favorites Grievous Angels and their blend of American roots rock and blue-eyed soul. The July focus is South Carolina’s Americana/folk/jam band Dangermuffin. We’ll update you when we hear about the other months.  First Friday is free, and music is suitable for the whole family. Make a night of it, and start with dinner in one of Washington Road’s eateries.

UPTOWN CONDOS APPROVED After more than a decade, several developers and a couple of different plans, the condominium development proposed for Washington Road at its intersection with Bower Hill Road is a go.

Commissioners gave final approval for Zamagias Properties to construct three condominium buildings on the parcels near the municipality’s northern gateway. The project, which will happen in three stages, will begin with a 16-unit building, followed by an 18-unit building, and, then a third building of 12 units.

Zamagias President and Chief Financial Officer David C. Martens says the development, to be called 400 Washington, is being marketed this month with construction soon to follow. Prices have not yet been set.

Plans call for 18 on-street public parking spaces on the site. The municipality would decide whether they would have meters, but the spaces would be set back from the travel lanes so that four lanes of traffic could still pass through the area. The public parking is important because the site is the former location of a municipal parking lot. It also was the the former headquarters for Medical Rescue Team South Authority. Adjoining properties were once single family homes.

Developers are adding 92 spaces in an underground parking garage for residents. The property includes an easement for a right turn only lane from Bower Hill to Washington.

Some of the units will look like townhomes and others, like condo units. Most of the single floor elevator access units would have two bedrooms with a den, with larger units having three bedrooms. The townhome designs will have three to four bedrooms. Sizes range from 1,500 to 2,600 square feet.

Although it has been talked about in other plans, the development would not have first floor retail or office space, Martens says.

Caption: Plans are taking shape for the long-awaited condominium project at Washington and Bower Hill roads. Zamagias Properties will break ground on the development, which will be called 400 Washington, with the goal of eventually constructing three buildings with a total of 46 units. 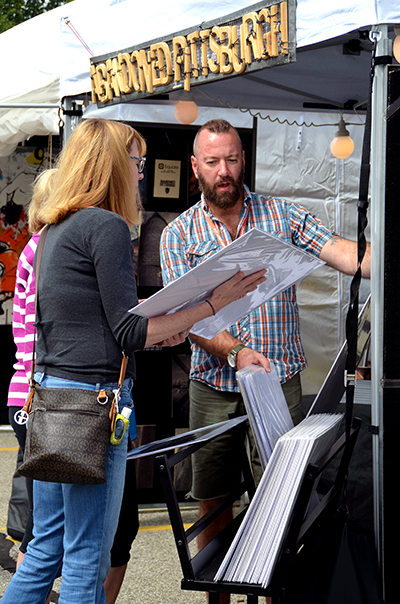 ARTISTS’ MARKET  How do you know the art at the Mt. Lebanon Artists’ Market September 24 and 25 will be top notch? The event is juried, with only the highest quality work making the cut. Organizers Steve and Wendy Denenberg announced the three jurors for this year’s event: Melissa Fabian, of Bridgeville, and Mark Bender and Charlene Langer, both of Mt. Lebanon.

“I love the fact that we have so many talented and respected art professionals living in Mt. Lebanon,” says Wendy.

Fabian and Bender both juried the event last year. Fabian was an art instructor for 35 years and teaches botanical illustration classes at Phipps Conservatory. She is the owner and lead designer of Wild Rose Landscaping LLC, where she and her staff have been practicing artistic and chemical-free landscaping for 11 years. She has a bachelor of science in art education from Edinboro University and a master’s in art from Duquesne University.

Bender, a classically inspired illustrator, has a long list of awards for his work, including Addys and a silver medal from the New York Society of Illustrators, of which he is a member. He also is a member of the Pittsburgh Society of Illustrators. He has been an award-winning faculty member at the Art Institute of Pittsburgh for more than a decade. He earned a master’s degree in illustration from Syracuse University.

Charlene Langer is a newcomer to the market but not to art. An artist who specializes in stained glass, metalsmithing  and drawing, she is a retired studio arts teacher. Langer was on the faculty at the Art Institute of Pittsburgh, a guest lecturer at the University of Pittsburgh and an adjunct faculty member at the Community College of Allegheny. Her undergraduate work was at the University of Kansas and her graduate degree is from Carnegie Mellon University. She is in her third term on the board of Touchstone Center for Crafts and is a past board member of the Fort Pitt Museum and Carnegie Library, in Carnegie.

Another of her projects was the Galleries on the Avenues in Pittsburgh, which took empty buildings and turned them in to places where artists would promote programs, events and art.

The Mt. Lebanon Partnership sponsors the weekend arts festival, which also offers food, music, hands-on kids’ projects and entertainment. Admission is free. Applications from artists are now being accepted for the festival. Details: www.mtlebanonartistsmarket.com and on the market’s Facebook page.