Mt. Lebanon Magazine photographer Robert Papke visited Turkey, where he toured the basilica of Saint Nicholas of Myra. Yes, the home of the real Santa Claus. In this week’s LeboLife blog, he takes us along on the trip to explore the many wonders he encountered.

As a child, I was always fascinated with history, maps and geography, especially in a far-off region that seemed so mysterious to me. This mysterious region, referred to as Asia Minor, was omnipresent on maps of the ancient world but seldom on current maps.

In college, I was introduced to Mehmet, who had recently moved to the United States from Turkey. As fate would have it, we were destined to be lifelong friends.

Mehmet eventually moved back to Turkey and would occasionally come back to visit me throughout the years in Mt. Lebanon.

In 2013, I made my first visit to his country, where I stayed for three weeks. Together, we explored the Aegean coast of Turkey—known in ancient times as Asia Minor.

During the early months of the COVID-19 lockdown, we started planning my second visit, a visit that would turn into an incredible journey through time and history.

This trip took place in September, 2021. We visited Greek, Roman and Seljuk Turk archaeological sites. We saw incredible beaches and swam the famed turquoise waters. We visited charming little villages and whenever we could, we ate lunch at open air, family owned, road side eateries. We visited numerous places from both the Old and New Testaments of the Bible, in addition to the oldest known religious worship site yet uncovered, Gobeklitepe, which was the topic of one of my previous blogs.

The basilica of Saint Nicholas of Myra was one on the many wonders that we came across on our epic 23-day road trip along Turkey’s Aegean and Mediterranean coasts, the desert region in the southeast and Turkey’s central interior.

Not only did  our trip across Turkey’s spectacular landscape cover thousands of miles, but we also covered thousands of years of human history and achievement.

Please come along on this epic journey as I visit the ruins of the Basilica of Saint Nicholas in what is now known as Demre, Turkey.

Nicholas was born in the Byzantine City of Patara along the Mediterranean Sea in southwestern Anatolia, on March 15, 270 CE, to the family of a wealthy wheat merchant.

As he was ascending the church hierarchy, on his way to become the Archbishop of Myra, Nicholas had gained a reputation for his piety, generosity and habit of secret gift-giving.

After his death and his later canonization, Greek Christians referred to him as Saint Nicholas of Myra. 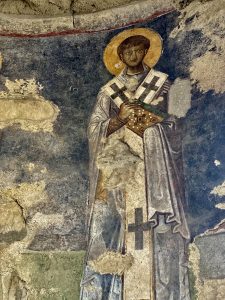 Nicholas the Archbishop of Myra died on December 6, 343.