On Friday nights in Western Pennsylvania, high school football is king. Parents grab an extra blanket to sit on cold metal bleachers. Students paint their faces to show school spirit, and the wild ones create chants that rival the volume of the band. This we know—but what specifically is in the genetic makeup of a Mt. Lebanon football player? Now entering his third season as Blue Devil head football coach, Mike Melnyk fully understands.

“I think we have great tradition,” says Melnyk. “Mt. Lebanon is a unique community, and I now know what the bubble of Mt. Lebanon is all about. I didn’t understand that when I first came here. Mt. Lebanon football is a family thing that runs deep and has been threaded over decades. Fathers and then their sons have played in this program. They are success-oriented, and there is an expectation of excellence.”

In Melnyk’s first season in 2012, the team rattled off seven regular season victories to earn a playoff berth and finished the year with a reputable 8-3 record. Last season though, the program took a step back and missed the playoffs, winning just three games.

For 17 seasons preceding Melnyk’s arrival, the Blue Devils were coached by the very successful Chris Haering (now an assistant coach at Pitt). Melnyk has a different approach and philosophy, but the players have not had difficulty adjusting because the all-end goal remains the same—winning football games.

“Coach Melnyk is intense, but more of a father figure,” says Matt Hoffman, a senior lineman. “We have a saying, ‘Tradition of Excellence.’ We are expected to be a team that looks to get to Heinz Field every year. It’s all about that pride. We didn’t hold up the tradition very well last year, going 3-6. This year, we’re looking to win every game.”

With that said, a great tradition can only get you as far as your past championships. So there has to be more. And the players feel that Melnyk has instilled his discipline into a tight-knit group of young men. They are a group that can work together and bond, even when the breaks aren’t going their way. “The main focus is that we are a family and that we are brothers,” says Shane Lefever, a senior wide receiver/free safety. “We are making sure that everything is crisp and we don’t make mistakes. We pay attention to details. Coach Melnyk really pushes us every day during the off-season and we have motivation playing as a team.”

Melnyk believes that this current group of players fully appreciates what the coaching staff is bringing to the table. Despite Mt. Lebanon being one of the largest school districts in Allegheny County, he feels they have to overcome obstacles just like everyone else.

“We have to work harder than anyone that we have to face,” says Melnyk. “We’re not always going to have the biggest or fastest players. We have to work extremely hard every day. That will give us a guarantee to have a chance to win. There’s one slogan that I use with our players: ‘Those who stay will be champions.’ That goes along with the hard work. They understand that I’m talking about being champions in life.”

The Blue Devils tout one of the most difficult schedules this fall. Featured games include matchups with perennial powerhouses, such as North Hills, Woodland Hills, and rival Upper St. Clair to end the regular season. Mt. Lebanon has not defeated USC since the 2010 season.

“It’s the biggest game of the year,” says Lefever. “There’s more incentive. It’s the one game that you want to win. Every season, our goal is to win our section and win WPIALs. We’re doing everything we can to be the best.”

“We learned to not read our own newspaper clippings,” says Hoffman. “We are supposed to be good. I trust everyone to step up and try to perform at the highest level. This year, I have a feeling we are going to be pretty good.” 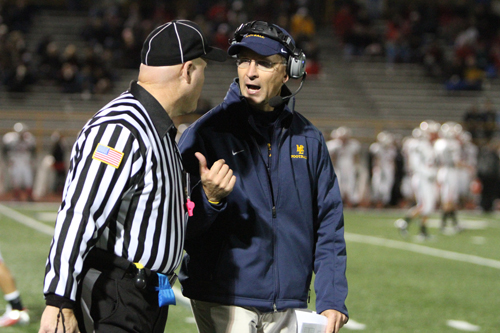