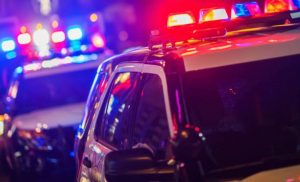 My heart started to pound before we even left the car. It was pitch black out and we couldn’t see much around us, aside from the car stopped in front of us.

Officer Scott Kunz explained what we were about to do. It was our turn to conduct a “traffic stop” inside Mt. Lebanon Cemetery. He positioned the wheels on the police car away from the curb, just in case a car were to come up from behind and hit the vehicle.

We had just watched several videos in class of cars traveling at a high speed on the highway and striking the vehicle stopped on the side of the road. So, I understood why he was doing this: If a car hit the back of the police car, it wouldn’t be pushed directly into the car we had stopped. 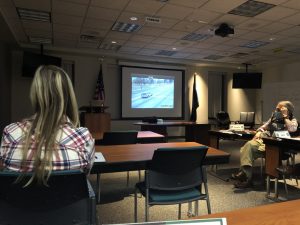 I firmly gripped my flashlight in one hand, with the fake gun that was holstered at my side in the other. I don’t know why I was nervous, this wasn’t even real. But, for a minute, it felt like I was really about to conduct a traffic stop along with my partner. I felt the pressure. You don’t know what’s going to happen when you approach the car. It’s intimidating. And, again, it was dark and we were in a cemetery.

Cpl. Cory Nolte was acting as a civilian, sitting behind the wheel of the car in front of us. My partner turned on the flashing lights and positioned the spotlight on the side of the car to illuminate the vehicle we were stopping.

As my partner approached the driver’s side, it was my job to stay on the passenger side and shine my flashlight in the windows and let my partner know if I saw anything suspicious.

Unfortunately, my flashlight wasn’t working. I asked Officer Kunz if that happens in real life. Luckily, he said, there’s a flashlight in each vehicle and each officer carries one, so there’s always a backup.

Even without the light, I immediately noticed a plastic baggie in the center console. One thing I also noticed was that it can be hard to hear your partner who is talking to the person on the other side of the car. My partner asked the driver to put the passenger window down, which helped a bit.

As Cpl. Nolte turned on the light inside the car, I could see much more clearly. I tried alerting my partner to the baggie of assumed drugs. There was also a gun sitting in plain view in the car. Again, I attempted to alert my partner to this and realized that this was a time when we really did need to use our “outside voices,” because I’m not sure if he could hear me.

Cpl. Nolte, acting as a civilian, explained he had a concealed carry permit and a medical marijuana card (You can’t have both in Pennsylvania.) My partner handled the rest of the stop.

Phew. I felt a sense of relief when it was over. It was stressful—just the unknown of it all. And, this was acting. I can’t imagine what it would be like to go into a situation like that in real life, not knowing anything about the person or what you might be about to encounter.

You really have to trust your gut. If something feels off, follow that instinct.

In class, we learned all about the behind-the-scenes of traffic stops, the importance of wearing a seatbelt, the dangers of the road and everything the Traffic Services Unit handles. They’re actually the ones that field complaints about cars speeding, and they also oversee overnight parking.

If you didn’t know about the new ordinance that went into effect October 1, you can learn more about that here. [1]

We also learned about DUI enforcement, how they investigate crashes and how motor carriers are monitored.