Did you know that 78 percent of Mt. Lebanon residents claim whiskey as their favorite drink?

You definitely did not, because I made that up. Don’t get me wrong, we probably do have a few residents who appreciate Ireland’s greatest gift to mankind (other than Cilian Murphy, of course). So for those people, and for anyone interested in a bit of trivia and history, I recently picked up some fascinating tidbits at an Irish whiskey seminar, and I just had to share them in this week’s LeboLife blog! 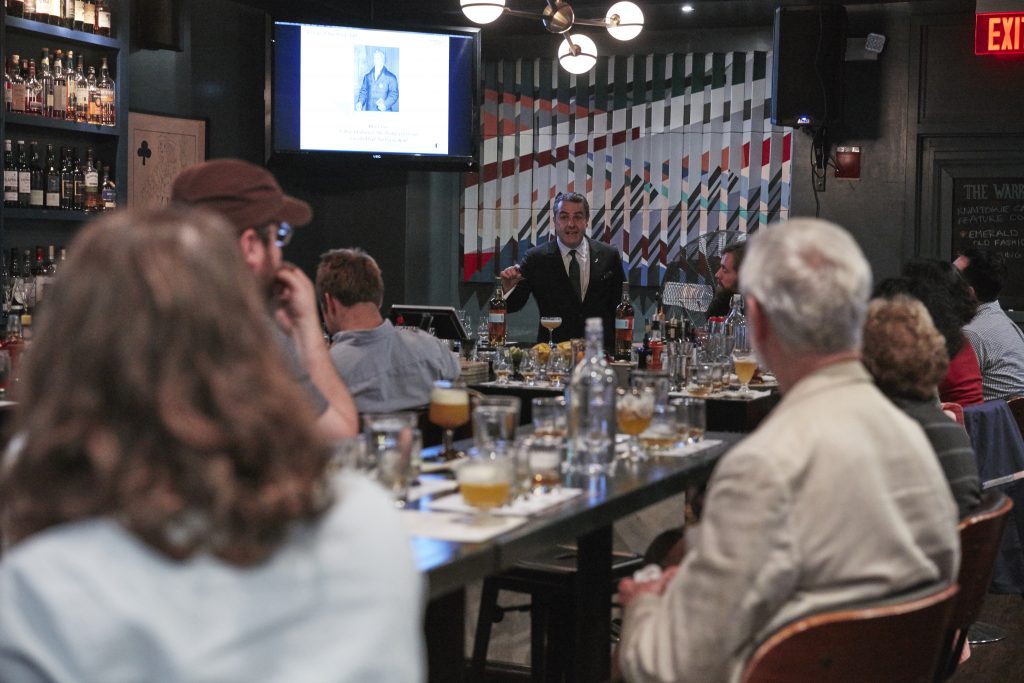 At the event, hosted by Knappogue (pronounced “Na-pogue”) Castle Irish Whiskey at The Warren on September 17, spirits expert Philip Duff talked about the origin of Irish whiskey, how it differs from other spirits, and what to look for during a whiskey tasting. I came armed with my husband, Killian, who is a Jameson enthusiast from Dublin, in the hopes that he could offer insights that would help elevate my whiskey IQ.

Here is what we learned:

The water of life

The word “whiskey” comes from the Gaelic phrase “uisce beatha” (pronounced “Ish-ga Ba-ha”), which translates into “water of life”—basically the Gaelic version of the Latin “aqua vitae.” Overtime, laziness took over and it became known merely as “whiskey,” a mispronunciation of “uisce.”

When the Normans (Norsemen from France) invaded Ireland in the twelfth century, they brought wine with them, and the wine merchants, or licensed “vintners,” managed the industry.  They filled the wine cellars in the castles of the Norman lords. Then they began selling surplus to the Irish public—introducing the concept of the tavern, where you can enjoy food, alcohol and comradery, to Irish society.

Historians believe that Irish monks began distilling perfume, and then eventually spirits, around 1000 A.D. It’s not clear when this concoction evolved into anything resembling whiskey, but certainly Poitín (pronounced “put-cheen”), a traditional Irish spirit with a similar reputation to moonshine, would have been a contemporary of early Irish whiskeys. Irish distillers were enjoying healthy, mostly unregulated sales to folks all over Europe who enjoyed their product for drinking, water purification and its medicinal properties. Then, as you might expect, things got a little crazy when King Henry VIII came along, declared Ireland to be “his colony” and began the English re-conquest of the country. Later, in 1608, the British Crown started issuing licenses to pubs and distilleries, and in 1661, it imposed a tax on all whiskey sales, which drastically diminished the legal whiskey trade. The illegal whiskey trade, however, was booming, as Irish distillers simply went rogue and took their operations underground. 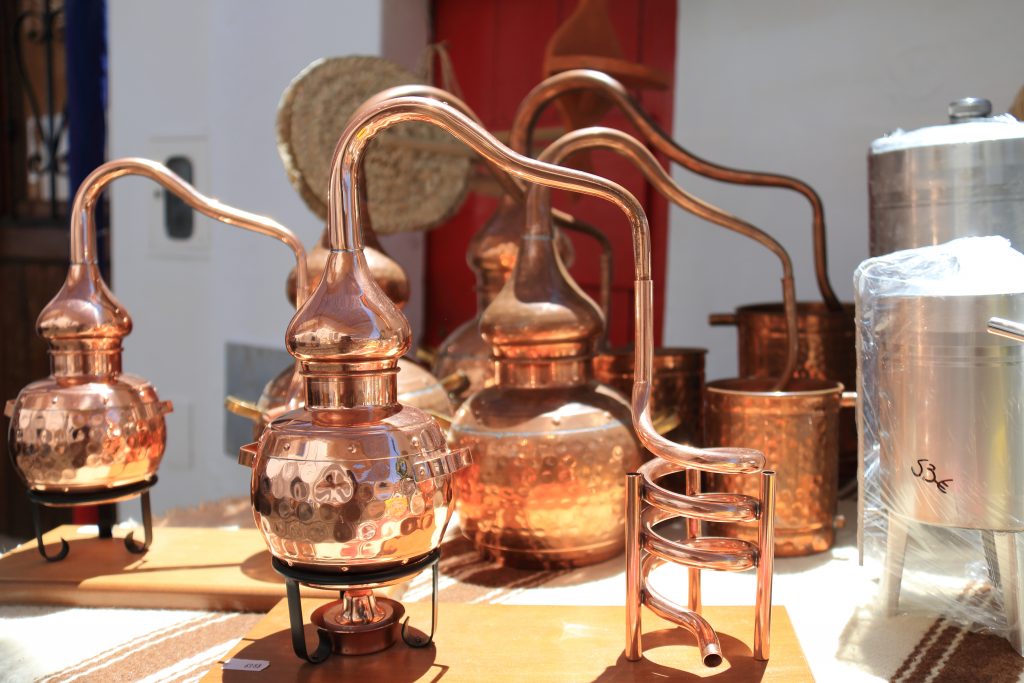 If you do a quick Google on the subject, you will see that it is heavily debated about which country—Ireland or Scotland—originally invented whiskey. But according to Duff’s presentation, the Irish were the first to receive any sort of recognition for it. In an effort to avoid new taxes introduced in 1785 on the use of malted barley, the Irish were using a unique blend of malted and unmalted barley (malted means that it has been soaked in water until the barley begins to germinate), lending it a thicker texture and a spicier taste. They would then age the whiskey in sherry casks. The Irish were also using single copper pot stills (see picture above), which is why the style was historically referred to as “pure pot still whiskey.” It became the most popular style of whiskey in the world in the 1800s. This style defines what we know today as Irish whiskey if it meets the following parameters: made in Ireland, uses malted barley, distilled to 94.8% alcohol, aged for at least three years in wooden barrels (usually sherry or bourbon casks).

Meanwhile, the Scots weren’t producing notable whiskies until the mid-to-late 1800s. According to Duff, “Scotch whiskey was rubbish until they followed along with the Irish and learned.” Also, an Irishman named Aeneas Coffey invented the continuous still, which the Irish rejected in favor of their single pot stills (love ‘em, but the Irish sure are stubborn), and the Scots embraced it as a safer, more efficient method. Coffey’s invention expanded on an earlier continuous still created by a Scotsman named Robert Stein, which allowed the Scots to experiment with grain whiskeys in addition to malted whiskeys. When the Scots started blending grain and malted whiskies, they finally had a product to rival Irish whiskey on a global scale. With characteristics very similar to Irish whiskey, the main classifying factor in Scotch whiskey is whether or not it comes from Scotland.

Extra tip: In case you were wondering (because I was), bourbon uses corn in the mash, which is part of the brewing process before distillation, and it must be made here in the U.S.

When whiskey is aging in wooden barrels, some of the liquid evaporates through the porous wood and disappears into the air. This is called the “angel’s share” of the whiskey. If you ever happen to be in Dublin, the historic Jameson distillery on Bow Street has a memorable exhibit dedicated to this phenomenon in the room where they formerly aged their whiskeys—it even smells faintly of whiskey from the decades of the angel’s share disappearing into the air. Interestingly, I learned at the Knappogue Castle presentation that the angel’s share varies based on location. So in Ireland, the rate of the angel’s share is about two percent per year of aging, but in warmer climates that are closer to the equator, up to 15 percent of the product can be lost yearly. 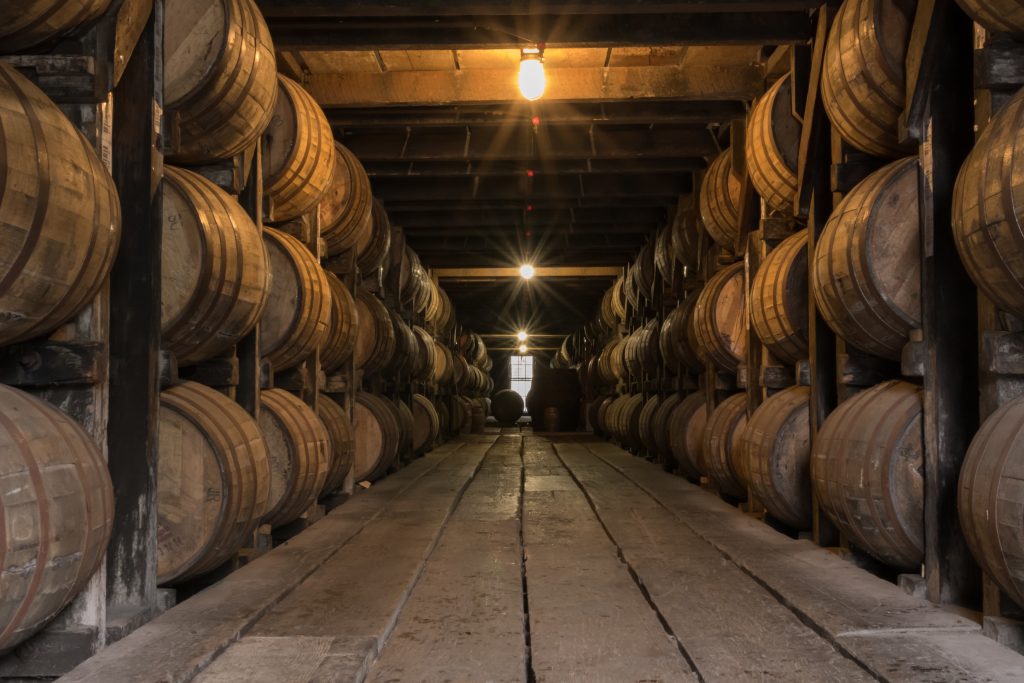 The Irish whiskey trade was in decline in the late 1800s due to the famine and the rising popularity of scotch, and the Irish War of Independence in the early 1900s further affected the trade. Duff told an interesting story about Al Capone sending a delegate to Dublin during prohibition. Evidently, this man met with Jameson and other notable distillers to try to cut a deal where the whiskey would be shipped to the Bahamas and then smuggled into the United States. All of the Irish distillers turned him down, realizing it was “immoral,” (or, as my husband argues, they may have just preferred trading with the Irish mafia here in the States), but the Scots had no such reservations. Barry Bros & Rudd took him up on his deal and began shipping their lightly blended Scotch whiskey to the Bahamas shortly thereafter.

Irish coffee in the States

San Francisco Chronicle travel writer and Pulitzer Prize winner Stanton Delaplane had an Irish coffee in the Shannon Airport in 1952, and he couldn’t stop thinking about it. He was working at the Buena Vista Cafe in San Francisco at the time, so he started experimenting with ingredients to replicate the drink he so loved in Ireland. His Irish coffee wound up being an incredible hit, elevating the profile of the Buena Vista Cafe, and bars everywhere started copying it. According to Duff, at the height of the drink’s popularity, more than 34 percent of Tullamore Dew’s whiskey sales went to the Buena Vista Cafe in San Francisco. The popularity of Irish coffee, the formation of IDL (Irish Distiller’s Limited) and the wildly popular launch of Bailey’s Irish Cream, which is made with whiskey, all contributed to the resurgence of the Irish Whiskey industry. 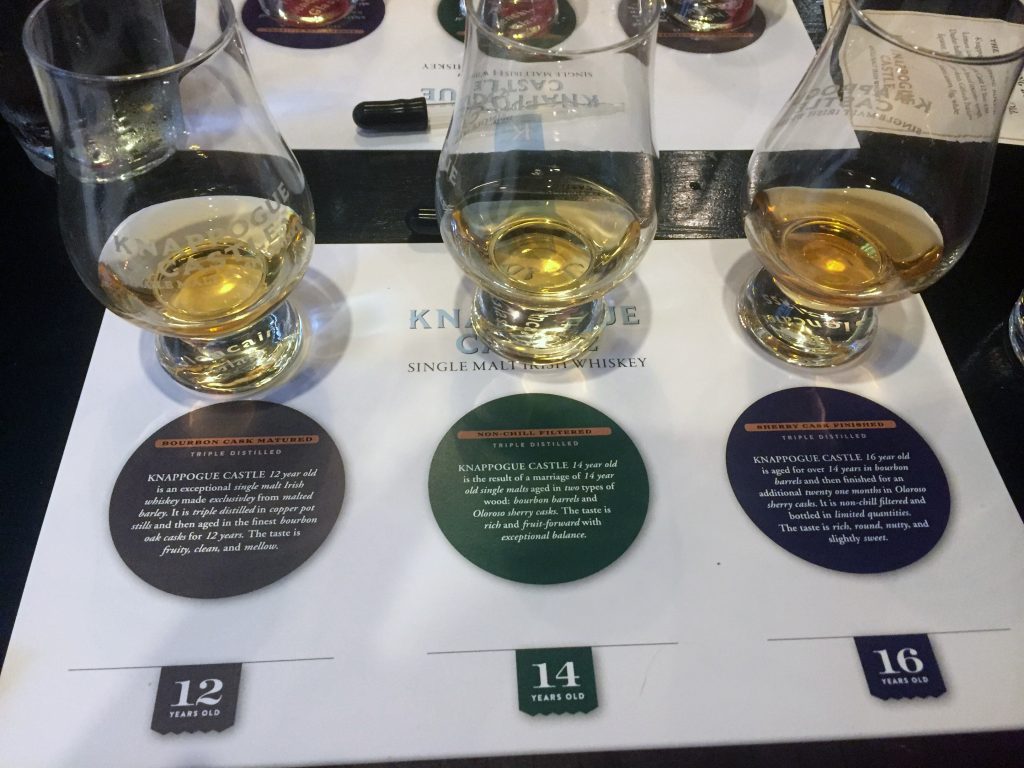 Beauty is in the eye of the beholder

Since no whiskey seminar is complete without a tasting, once we covered all of the highlights of Irish whiskey history, we sampled the Knappogue Castle 12, 14 and 16 year whiskeys, with a special surprise—a taste of a limited-edition 21-year—to top it off.

For a bit of background: Knappogue Castle whiskey is named after a castle in County Clare that was bought and refurbished by a Texan, Mark Edwin Andrews, in the 1960s (“Sounds like a Yankee with notions,” says my husband). He loved Irish whiskey and he partnered with Bushmills to start bottling Knappogue in the traditional Irish style—malted barley, triple-distilled a batch at a time in copper pot stills and aged in casks for at least 12 years.

We used whiskey water droppers to water down each sample—evidently this makes it easier to taste beyond the initial bite of the alcohol and really get a sense of the other flavors present in the drink. Then we took slow, meaningful sips, thinking about things like the aroma, initial taste and aftertaste.

You are probably thinking that the older whiskeys are the best, right? Well my favorite was the 14-year, because it had a surprising sweetness to it, with minimal spiciness. It was a blend of two 14-year-old single malt whiskeys—one aged in bourbon barrels and the other in sherry casks. The 12-year had a very strong bite to it initially, but the taste did not linger too long on the tongue. And the 16 year had a pleasant fruitiness and spiciness—it was Killian’s favorite. Interestingly, the 21-year didn’t taste anything like the other three. In fact, I would almost call it sweet.

Since I am no whiskey expert, I entered into this sampling thinking that they would all taste the same to me. So I was delighted to find that each one had its own distinct character that was easily recognizable.

Hopefully some of this information will be useful to you—you know, for the next time you are trying to impress your date or are a contestant on Who Wants to Be a Millionaire? If this story has inspired you to imbibe, now you can drink knowledgeably! But don’t forget to always drink responsibly.