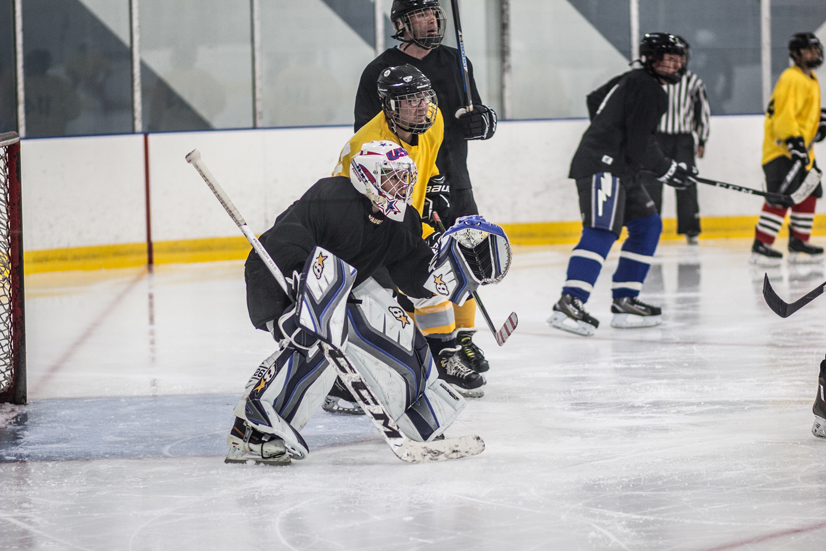 They call it the Ultra-Light League, but the name has nothing to do with beer or calories or lacking bravado. The participating hockey players are, however, required to take it a little easy. Older bones and all.

“We call it the Ultra-Light League because there’s no contact. They all want to try to get up in the morning in one piece,” says David Hornack, assistant facilities manager for the Mt. Lebanon Recreation Department. He oversees the hockey leagues at the municipal rink. The no-hitting Ultra-Light is for players 40 and older.

Remaining active is a goal for many middle-agers to seniors, with options from walking to running and gym workouts. For those who prefer something more organized or involving a team or a sport, several leagues attract Mt. Lebanon’s older set.

At the busy Mt. Lebanon ice rink, Ultra-Light games are often scheduled at interesting times, say, 10 or 11 on a weeknight.

“It’s like any sport. It’s like if you’re a golfer and get up at 6 o’clock in the morning to go golfing,” says Bill Hanna, 60, a forward in the Ultra-Light League.

Hanna, of Munhall, has been playing at the Lebo rink since the early 1980s and appreciates the opportunity to keep playing. “It’s a friendly league. It’s competitive but it’s not, uh, cutthroat. That’s a nice way of saying it,” he says.

The Ultra-Light League, which welcomes women but is mostly guys, has seasons all year.

“There are various skill levels,” Hornack says. “Guys rate themselves A, B or C, A being almost a collegiate or high school kind of background and they’ve played the game for a long time. Cs would be fairly new, just started the program, just started playing. The B would be an average skill set for that league. The whole idea is to exercise, have fun and compete a little bit.”

There is one asterisk to the age restrictions: Goaltenders are hard to find, so they don’t have to be older than 40.

“They were short a few seasons ago, and I got to fill in the gap, and they haven’t gotten rid of me yet,” says goalie Alison Koeppel, 33, Woodland Drive. “I’m lucky to get to play with these guys. They’re great men and women. We care if somebody falls. We help them up. Everybody wants to go to work the next day.”

For those who don’t like to be cold, how about the South Hills Senior Softball League? It’s a 55-plus men’s league from April through August, with evening games at several local fields. 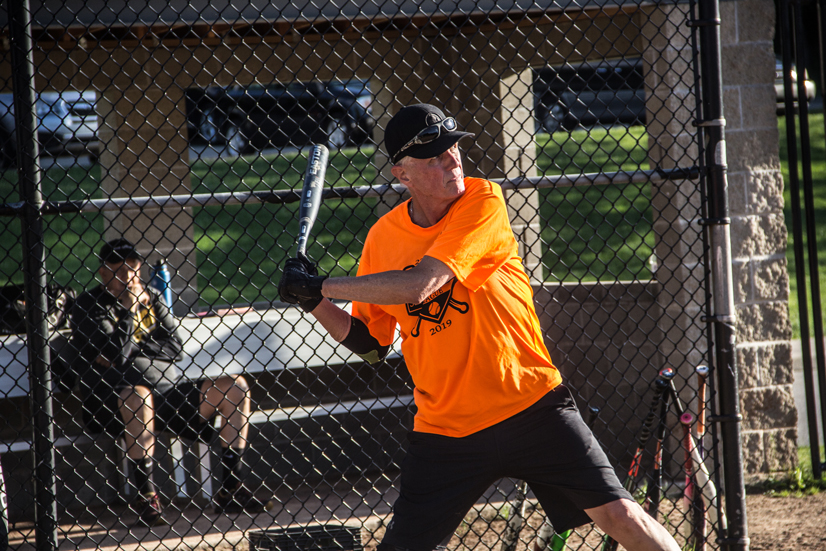 says Bob Hagerty, 63, Jefferson Drive, who joined the softball league in 2017 and now is a board member. “I loved playing baseball as a kid. Then I didn’t have time for that, didn’t have the occasion, for almost 50 years. You meet people you’d never meet otherwise from all over the Pittsburgh region. It’s just very rewarding to be a part of a team.”

Eight teams of 14 players averaging about 66 years old play 28 nine-inning games, and there are some nods to creaky knees, reduced mobility and a desire to cut down on injuries. Teams play four outfielders and an extra infielder. The field has two first bases and two home plates to avoid collisions, and there are no tags at home, although sliding into second and third is allowed (and a few guys do.)

It’s slow-pitch, using aluminum bats and a restricted-flight ball. The rosters are shuffled every year, reducing the chances of a dynasty.

“It’s a competitive league, but it’s not win-at-all-cost,” says league commissioner and player Doug Houston, 69, who grew up in Mt. Lebanon and lives in South Fayette.

The games are self-umpired, which can lead to some interesting discussions, but mostly they are good-natured.

“We tell the guys, we try and watch the foul language because some guys bring their wives and kids. We try and keep it to a dull roar. But some people you just can’t control,” he says, laughing. “As long as the good Lord is willing, I’ll keep playing.”

If you’re interested in a different type of pitching, the horseshoe pits in Dormont Park might be your place. The Dormont Horseshoe Club holds games there Thursdays and at the H.O.P.E. club of Carnegie on Tuesdays, both at 7 p.m. May through August.

“I’m 53, and I’m one of the youngest,” says Dormont club president Jim Griffin, who points out that women and men over 70 are allowed to pitch from 30 feet rather than 40 feet and all skill levels are welcome—their pitchers start at just a three percent ringer rate, or one ringer out of every 30 horseshoes pitched.

A popular older-adult organization is the Mt. Lebanon Senior Men’s Golf Club for those 55 and older. Approximately 120 members play Wednesdays April through October at the municipal golf course, with monthly away outings at regional courses. 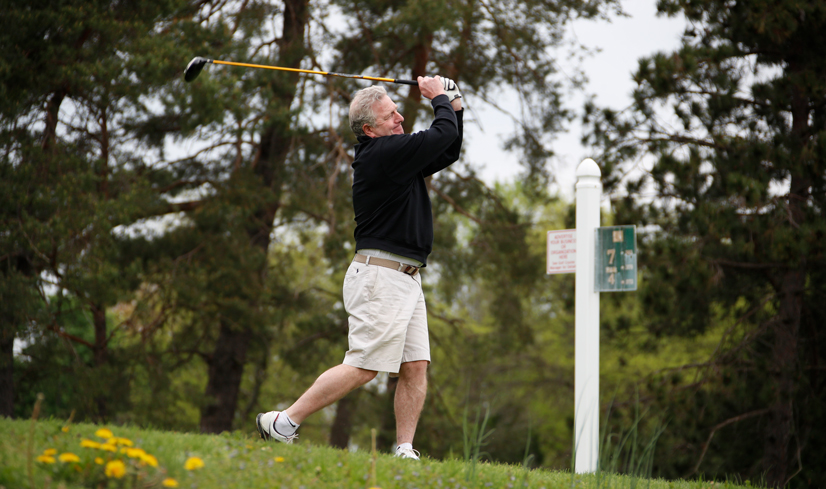 “At Mt. Lebanon, we’re the biggest league there. We have the tee on Wednesdays from basically when they open until about 10:30 or 11,” says Mike Wallen, 72, Summer Place, who served as president in 2018.

There’s a wide range of ages and skill levels.

“The oldest are in their low 90s,” Wallen says. “Generally the older guys tend to tee off later in the morning so they don’t hold up everybody. I’ve played with some of the older members. They don’t hit the ball very far, but they can’t see that far, either, so it works out well.” Wink, wink.

Wallen says the players’ handicaps range from “maybe a 2 to as high as they can go… It’s social. Yeah, there are some people who worry about what their handicap is, but I think the majority of the people just like to play, like to get out.”

For a non-impact adventure, the Masters’ Division of the Mt. Lebanon Aqua Club includes age divisions from 18 and up. At an international swim meet they created a new oldest division for a 105-year-old American man, says Mike Kristufek,
Aqua Club general manager. 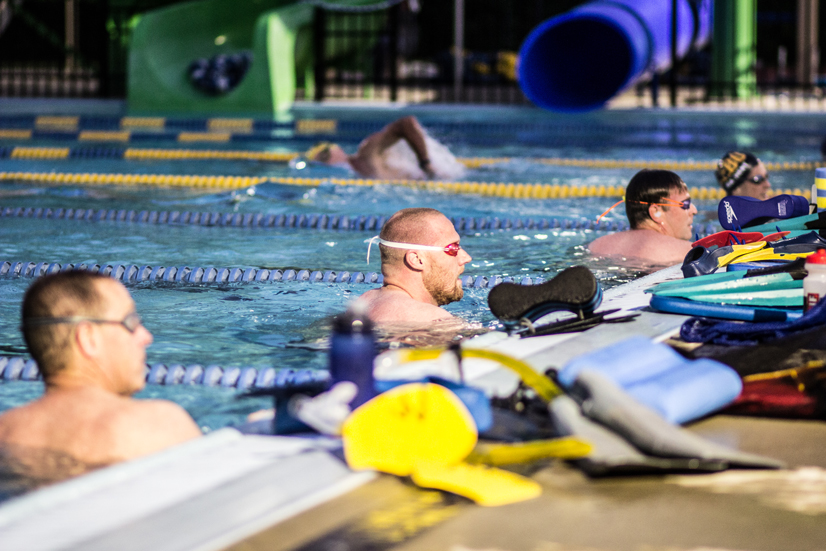 The Aqua Club has a couple of swimmers their 60s and 70s. The masters participate in a couple of swim meets a year, sanctioned by United States Masters Swimming, but they practice regularly—early mornings at the high school pool or, in the summer, the Mt. Lebanon Swim Center outdoors. Early, as in 5:15.

“Usually by the end of practice (outdoors in the summer) we get to see the sun rise, which is a fun thing in and of itself,” Kristufek says. “We’ve been getting more and more people who are figuring out the low-impact and that swimming is a way to get back into shape.”

If the repetitiveness of laps isn’t your thing, an underwater hockey club plays in deep water with a weighted puck, on Thursday nights at Mt. Lebanon  and Tuesday nights at West Allegheny high schools. Kristufek, who plays, says the age range is high school to players in their 60s.

As Mt. Lebanon Magazine has chronicled, bocce draws some older adults to Mt. Lebanon Park, near the impressive and well-used tennis center. 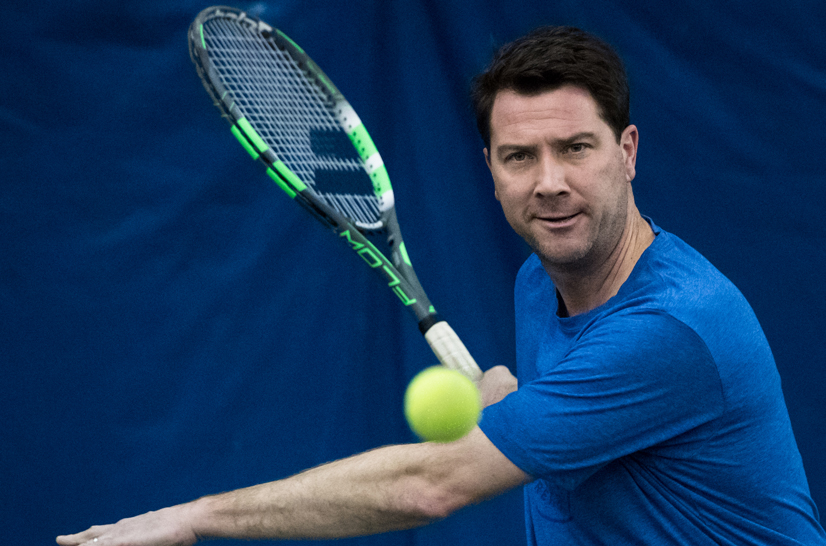 “Our regular clientele, especially in the morning, is all older folks,” says Hank Hughes, tennis center manager and head pro. “We open at 7:30, and there’s usually a line of people to get on the court before it gets hot.”

Several leagues provide opportunities. The most competitive are United States Tennis Association sanctioned, with a chance to advance to regional and even national play, by age group.

Diane Barna, 57, of the Cedarhurst area, has played in all of them and practically makes the Tennis Center her second home.

“I am there quite a bit. Yes I am,” Barna says. “I was in my late 40s when I took it up. The health benefits are wonderful. I can be doing this for the next 20 or more years. I see people playing that are my parents’ age.”

Another sport with seemingly explosive popularity among seniors, and all ages, is pickleball, a paddle ball sport combining elements of tennis, badminton and ping-pong. Mt. Lebanon is mulling its options for developing pickleball courts.

“Initially it was the No. 1 priority project of the Sports Advisory Board,” David Donnellan, director of the Mt. Lebanon Recreation Department, says. “The Commission elected not to move forward on the project in 2019 because they’re focusing on some ADA accessibility improvements to the park that pickleball was proposed for, Meadowcroft Park. We’re hopeful that perhaps the Commission will fund it in 2020.”

So maybe another older-adult league is on the horizon, paving the way for more athletes to stay active and enjoy the social aspects of senior leagues.

“We go out afterward and have a couple beers or whatever,” softball’s Houston says. “It’s not unusual for the two teams after the game to end up at the same place. You meet guys and you find some common things, and the next thing you know, you’re hanging out with them.”