Since our founding more than 39 years ago, Mt. Lebanon Magazine has earned high readership, along with awards for high quality writing and design from journalists, public relations professionals and government organizations.

Mt. Lebanon Magazine is the official magazine of Mt. Lebanon, published by Mt. Lebanon Municipality. It is delivered free 10 times a year to every household and business in Mt. Lebanon, to professional, government and civic leaders countywide, and to the offices of physicians, dentists and other professionals in the South Hills. In addition, people can pick up magazines at all South Hills libraries, Mt. Lebanon’s municipal offices and recreation center, and area coffee houses.

Nine out of 10 Mt. Lebanon residents read our magazine every month—because it’s informative, reliable and entertaining. And now, many residents as well as people all over the country read it online, at www.lebomag.com.

Mt. Lebanon residents are among the most affluent, best-educated residents of the Pittsburgh region. They shop for fun and good value; they love to dine out; they travel; they enjoy cultural, educational and sports events; they’re concerned about health and fitness, and they plan for the future.

Our population has remained stable over the past decade with just as many residents under 18 as over 65 and a median age of 43. Up to three people in each household read mtl magazine.

Nearly 9,000 of Mt. Lebanon’s approximately 14,000 households are family households, with 86 percent of residents owning their own homes. But many young singles and couples start out renting here, attracted by the beautiful but affordable housing and vibrant business districts. Housing prices have steadily risen; last year the average was $233,756.

People who move here like it. Sixty seven percent of residents have lived in the same house for at least the past five years. On the other hand, we have a constant influx of newcomers—33 percent recently have moved to Mt. Lebanon from elsewhere. 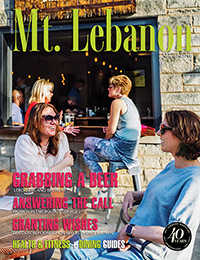