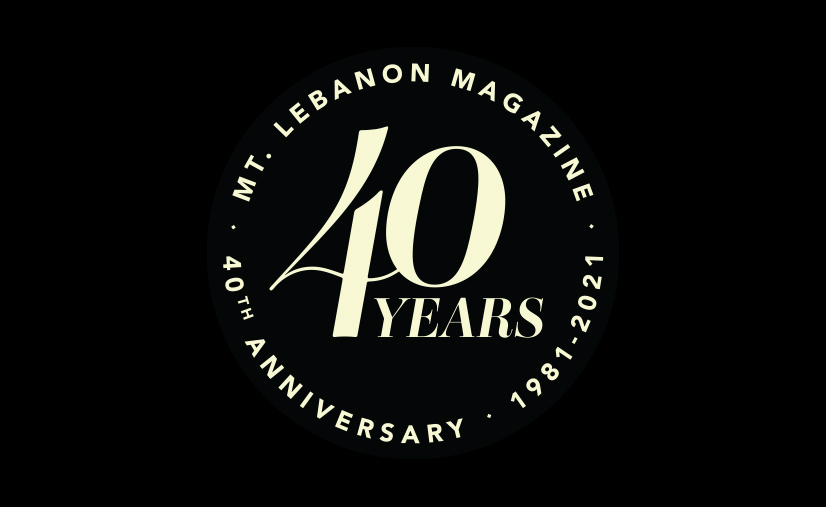 The first issue of Mt. Lebanon Magazine, in January, 1981,  was 28 pages and contained three feature stories: House Tour, about an “ultra-futuristic” home on the corner of Midway Road and Neulon Avenue; Theater Helps High School Students to Get Their Acts Together and Local Kid Makes Good, a profile of then-governor of Colorado Richard Lamm, a Mt. Lebanon native. Also included were a few news briefs, a listing of adult education classes offered by the school district and programs at the Mt. Lebanon Public Library and the recreation department.

Advertisers in the first issue included Washington Square, the still-under-construction condominium at 750 Washington Road, with a price range starting at $84,000 for a one-bedroom and $175,900 for a penthouse view; the Cyclops  Corporation and the Food Gallery, in the St. Clair Shops, took full-page ads, as did Mellon Bank and Freeman Foltz and Valicenti Realty Company took the back cover.

Mt. Lebanon Magazine was one of the first community magazines published by local government. For the first year and a half of its existence, it was a joint venture between the municipality and the school district, taking the place of The View, which ceased publication in 1980. Beginning with the June/July 1982 issue, Mt. Lebanon Magazine was exclusively a municipal publication, with offices in the Mt. Lebanon Municipal Building.

Mt. Lebanon Magazine’s primary mission, which can be found on our masthead on page 5,  is to “cover municipal, school district and community issues, encourage civic engagement and promote the assets that make Mt. Lebanon a premier part of the Pittsburgh region.”

Public Information Officer Laura Pace Lilley is the magazine’s editor in chief. Municipal Manager Keith McGill is the publisher. McGill takes the publisher’s role very seriously, and carefully reviews each magazine’s content prior to publication, although he gives the magazine a lot of autonomy, and has never spiked a story. That is a policy that has more or less been in effect since the beginning.

The magazine has a circulation of 23,000 and is delivered free of charge to each household and business in Mt. Lebanon, and to libraries, businesses and professional offices in the South Hills. We print 10 issues a year, with double issues in January and July. The May issue contains the municipality’s Popular Annual Financial Report.

Each issue of the magazine contains a feature spotlighting a facet of municipal government, from police and fire to public works and tax and finance. The front section of our book is filled with smaller items on public safety, new businesses and a variety of community-related topics, including occasional columns from our commissioners. The back section features profiles of residents and Lebo natives who are doing cool things, plus news of residents’ achievements and accomplishments. We welcome story ideas and news of your triumphs. Send them to mjantz@mtlebanon.org, or call 412-343-3787.

The magazine is produced by Mt. Lebanon’s Public Information Office (PIO), by a staff of eight, most of whom are part time. Three advertising account executives, who are outside contractors, sell ads that cover more than 90 percent of the cost of production. A list of excellent freelance writers, photographers and copy editors also contribute to the magazine.

Although the magazine’s first executive editor, Virginia Phillips, was referred to in the yearly financial reports’ organizational charts as Public Information Officer, it wasn’t until the 1992 annual report that any serious mention of a public information office made it into the financial report: “Magazine staff also manages municipal public relations projects from community promotion efforts to recognition programs for outstanding citizen volunteers, to information for new residents, to education efforts for employees and residents on complex municipal projects.”

Since then, the public information officer role has increased in scope and responsibility. Susan Fleming Morgans took over the position in 1997, and saw the PIO role expand considerably under Municipal Manager Steve Feller, who started in 2001. Under Morgans, the PIO was instrumental in organizing the two-year capital campaign for the Mt. Lebanon Veterans Memorial, at the entrance to Mt. Lebanon Park. The campaign raised more than $245,000 and secured a Duquesne Light Power of Light grant for $220,000 for the memorial, which was dedicated on Memorial Day weekend in 2012.

The PIO is responsible for internal and external publications and offers writing and design help to other municipal departments, and serves as staff liaison to the municipality’s Historic Preservation Board, and works with the newly formed diversity, equity and inclusion committee.

The office plays a key role in emergency operations, working closely with the municipality’s first responders, and managing the LeboALERT system and working with the LeboEmergency platform. Throughout the COVID-19 pandemic, the PIO provided content for a COVID information page on the municipal website. We write and send the biweekly Seven Ten e-newsletter. The next major project on the horizon is an overhaul of the municipal website, www.mtlebanon.org.

Before the renovation of the Mt. Lebanon Municipal Building, which was finished in 2004, the magazine’s offices were located on the second floor, in the space now occupied by municipal manager Keith McGill’s office and the adjacent conference room. At the time, the police and fire departments were still located in the municipal building, which sometimes posed challenges to phone interviews, as fire trucks with sirens blaring pulled out of the garage directly below the office.

For the first dozen or so years, the cover of the magazine was devoted to a Norman Rockwellian “slice of life” photo, which took up a load of staff time for planning and execution, and sometimes the results did not meet expectations. Beginning in the mid-1990s, we began tying the cover image to magazine content and life has been that much easier.

In 1995, the magazine underwent a complete redesign, helmed by art director Helen Worsing, who came aboard the previous year. Several smaller-scale redesigns have kept the magazine’s look fresh. In 2003, the magazine introduced a color cover to its black-and-white format, and by 2008 the entire magazine was in color.

Over the years, the magazine helped chronicle some important bits of local history.

The Galleria opened in March, 1989, with a month of promotions and events. The March issue contained a list of the original lineup of stores.

Our first Light-Up Night on Washington Road was in 1990.  The name was later changed—under threat of litigation by the Pittsburgh Downtown Partnership, who had trademarked the event—to Lebo Lite Nite. 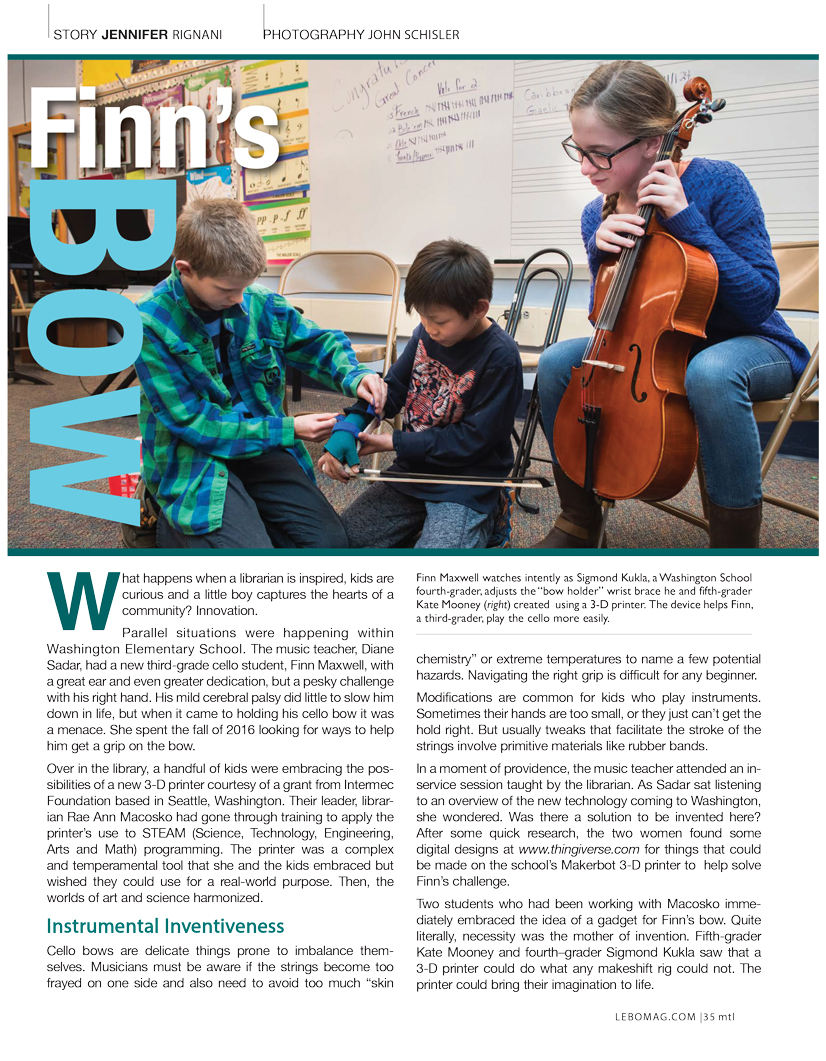 Mt. Lebanon Magazine began writing about the proposed expansion of the Mt. Lebanon Public Library in 1990, and promoted the capital campaign that raised more than $1 million for the $4 million project, which was completed in 1997 and more than doubled the size of the building.

The magazine helped raise awareness of the need for a separate building to house the fire and police departments, something that finally came to fruition in 2003.

Along the way, our tone has evolved. For example, a few historic headlines that wouldn’t fly today:

Nobody Loves a Fat Cop

The Irish Can Too Cook!

And while we have always championed diversity—with stories such as 1986’s On Being Black in Mt. Lebanon and 1995’s Getting Around, a look at just how wheelchair-friendly Mt. Lebanon was—in 2020, we became firmly dedicated to ensuring that everyone who contributes positively to life in Mt. Lebanon will see themselves reflected in our pages. 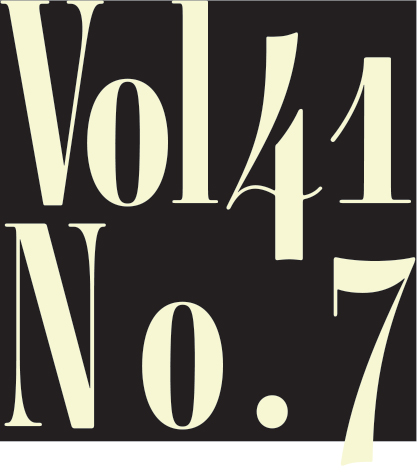 The latest issue of Mt. Lebanon Magazine is 60 pages and contains three feature stories: Gift of a Lifetime, a look at the process of organ donation and transplants from every aspect; Closing the Door on Open Concept Living, which examines the trend away from open spaces in homes as a result of how the pandemic has increased the need for private spaces in the home; and Local Magazine Turns 40. Also in the mix are municipal news, personality profiles, listings of adult education and recreation department offerings and some information on what’s happening at the library.

In January, 1981, four of our current staff members had not yet been born. Although the magazine and the public information office have undergone a predictable regimen of changes over the last four decades, as we begin our fifth, the focus remains the same: We believe Mt. Lebanon is a great place to live, work and shop. There are great stories out there. It’s our job to tell them, and we love that job.