Spending the summer back home in Mt. Lebanon was just what Austin Kitchen needed. At times, he would sit and relax at Clint Seymour Field (he still calls it Wildcat Field out of habit). He marveled at the upgrades to the facility, and he also reflected on all that’s happened in the short time since he played there for Mt. Lebanon High School.

Other times, Kitchen would be in the high school weight room, another familiar spot, but this year he was following a program set by the baseball staff at Coastal Carolina University, where he sustained an injury at the end of a promising season as a freshman left-hander.

A year ago, he set out for college like so many high school graduates. He returned a national champion and a Louisville Slugger Freshman All-American.

Coastal Carolina, a school near Myrtle Beach, won the College World Series in June, beating Arizona in the best-of-three final in Omaha, Nebraska. The Chanticleers were first the program since Minnesota in 1956 to win the CWS in their first appearance. 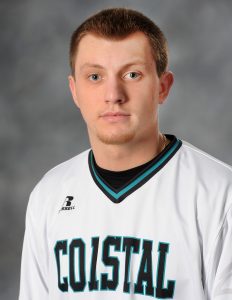 Kitchen, of Altadena Drive, didn’t get to pitch in the later stages of the NCAA tournament after he sustained a triceps injury late in the season, but that didn’t dull the experience. At the final out of the 4-3 win that clinched the series, Kitchen raced onto the field with his teammates, and the celebration was on.

It was kind of a blur for the next several hours, including the trip back to campus.

“When we had the parade the next day—we had a thing at the stadium, and it was packed­—that’s when it really started setting in,” Kitchen said.

Kitchen, whose record was 6-1 as both a junior and senior at Mt. Lebanon, chose Coastal Carolina because most of the other schools recruiting him were in the north, and he figured a warmer climate was more conducive to baseball and to a pitcher wanting to keep his arm loose.

The fact that the beach was nearby didn’t hurt, and Kitchen said he and his teammates would sometimes head there after Sunday practices. But besides playing cornhole or throwing a Frisbee around, he spent a lot of his time at the beach sitting in the water and relaxing or reflecting, much as he did this summer at the baseball field.

Expectations for Kitchen when he arrived as a freshman were modest. The coaches laid out a plan where he would come in as a reliever for short appearances, maybe a batter or two in a lefty vs. lefty situation. Kitchen could expect to pitch maybe 15 or 20 innings total.

He was OK with that.

Fall workouts went well, though, and by spring Kitchen, the only lefty in the Chanticleers’ bullpen, became a go-to guy.

“We weren’t sure exactly what to expect with him coming in,” pitching coach Drew Thomas said. “He just kept getting better and better. He was a huge part of our bullpen.”

Going into the team’s final regular-season series, Kitchen was 4-0 with two saves, a 1.38 ERA and an opponent batting average of just .135. The Chanticleers rewarded him with a start, and he made two appearances early in the playoff run. But something wasn’t right, and his ERA shot up to 3.19.

“Something about a pitch I made and my triceps bunched up on me,” Kitchen said of an injury the team kept quiet for a couple of weeks after it happened.

Kitchen probably could have pitched by the time Coastal Carolina faced Arizona, but the coaches didn’t want to put that kind of pressure on a freshman who was coming off an injury and quite possibly rusty.

That’s OK. There is plenty of baseball ahead for Kitchen, who got into the sport by playing T-ball at age 4 and has aspirations of making it into the pros.

As a tyke, he wanted to do everything older brother John, or J.J., did, and so he followed J.J. into baseball, basketball and football. J.J. now plays baseball for Pitt-Bradford.

Austin Kitchen dropped basketball by the time he got to high school. He played fullback and outside linebacker for the Blue Devils as a freshman. By his sophomore year he devoted himself exclusively to baseball­, partly on the advice of Ian Happ, a former Mt. Lebanon High School player who was drafted in the first round by the Chicago Cubs last year and is a touted minor-leaguer in their system.

“He talked with me. He told me I could make something out of the game,” Kitchen says of Happ.

Kitchen returned to Coastal Carolina in early August, and this year expectations are higher.

Not only will he shift academically toward a major in finance after being undeclared last year, but he also has a growing role with the Chanticleers.

There is a chance Kitchen will move from the bullpen into the starting rotation, particularly if he can continue developing a slider to go along with his fastball, curveball and changeup.

Thomas pointed out that Kitchen’s fastball isn’t blazing, usually topping out in the 87 to 89 mph range, “but he has a lot of deception. It looks like it is coming out of his ear.”

Everything else about Kitchen seems pretty straightforward, and he doesn’t seem to be putting undue pressure on himself.

“I have the whole fall” to work on things, he said. “I’ll accept my role.”

After all, that approach worked out pretty well last year.