My mother, Dwoira Dina Lent, was born in 1919 in the village of Sierpc, Poland, and died in 2009 in Pittsburgh. Her life’s journey was a microcosm of its time.

It was a standard pattern for immigrant families to come to America in waves, the first saving up fare for the second. Mom arrived here at age 7 with her mother and three sisters seven years after her father and three other siblings.

America still viewed itself as a melting pot in those days; diversity was not on the horizon. Mom decided to unyoke herself from everything she considered European the instant she touched ground in New York. She vowed to stop speaking Polish, tossed her pierced-ear earrings into the street, and changed her name to Dorothy, which she considered straightforward American.

Mom’s introduction to America seems unbelievable in this age of supra-security for children. She was immediately quarantined in the hospital on Ellis Island because she had measles. There was no language in common with the staff. Her only company was the rodents playing on the floor of her room: mice by day, rats by night. Mice were preferable because they left her alone, while the rats scampered over her bed, taking bites along the way. Mom maintained that she never cried.

One day, hospital authorities handed her over to a man who said he was her father. They both had to accept the relationship, since he had emigrated two months after she was born. He gave her candy and took her home to be reunited with the rest of her family.

The Bronx apartment doubled as a business location. Within two weeks, my grandmother had established a Prohibition-era industry making what we would today call “artisanal vodka” but was then known as “bathtub gin.”  Mom “made the drop.” Yes, it’s true; my mother was a 7-year-old rum runner, walking alone in New York after having lived in semi-rural Sierpc.

I once asked how she managed without knowing English. “Easy,” she replied. “I met the local Yiddish-speaking residents and learned the major landmarks. Besides,” she added, “I was the logical choice because the police didn’t suspect a little girl.” It was a stoic answer. 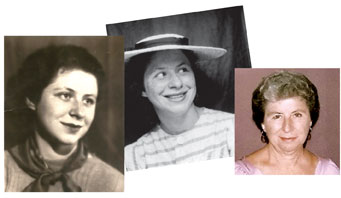 The end of Prohibition dried up the primary source of family income. As the Depression deepened, they sank into poverty along with millions of others. Mom stayed in high school by sheer determination, graduating early with honors and then starting at Hunter College on a scholarship.

New York City was a cauldron of academic, artistic, political and social justice causes in the ‘30s. Mom thrived in that atmosphere. She was a wonderful modern dancer, studying with Anna Sokolow, a protégé of Martha Graham, and also a very good pianist, passionate about classical music her entire life. She collected money in the subway for the Abraham Lincoln Brigade, as it fought against Franco. She advocated for national health care. She was a health food, diet, natural medicine and exercise enthusiast when the movements were still on the societal fringe.

She didn’t finish college, because her scholarship was revoked after some malevolent person reported her Brigade activities. So in 1940, she moved to Washington, D.C., becoming part of a great migration of people anxious to pull themselves into the middle class through government work. There, she got a job with the Census Bureau.

I was born in 1944, at which time my parents moved to the Maryland suburbs. Despite the overall conformity of the late ‘40s and ‘50s, Mom was an early feminist. She wore pants at home when other women wore dresses. She worked when most mothers stayed home. My sister and I were raised to not allow ourselves to be held back in life because we were female.

She taught us by example. On one trip to the Senate visitors’ gallery, she pointed out Margaret Chase Smith, then the only woman in the Senate. “See what you can accomplish?” she whispered. She insisted that we get an education so we could support ourselves. “Don’t count on always having a husband to take care of you” was a mantra. Mom always did face reality squarely.

There were rough times, including financial hardship and a divorce. Mom finally achieved the immigrant’s dream of being a member of the middle class when she entered a second, very happy marriage. They lived in New York, then in Florida, a typical retirement move at that time. At age 74, Mom earned an associate in arts degree, an achievement that brought her overpowering happiness.

Mom chose to spend her last years near us, part of the vast reverse migration of parents from southern retirement homes to their children’s northern cities. We were fortunate that Mt. Lebanon has several senior care communities, so we were able to be close to her as her health declined.

It was hard for an independent woman to admit she needed help, so Mom said she had come north because she was tired of flat Florida. Besides, Pittsburgh had a classical music station, while Miami didn’t. Mom was practical to the end.

I don’t know if she knew how ill she was, but she must have realized something was wrong when she stopped listening to WQED-FM. My guess is that she could no longer follow the music, so rather than be frustrated; she gave up a lifelong pleasure. It was the only challenge my indomitable mother couldn’t meet.

Mom was joyous when her family was joyous, and supported us with love, counsel and stubborn strength when we needed it. She brought happiness to the lives she touched for 90 years. Thanks, Mom, for everything.