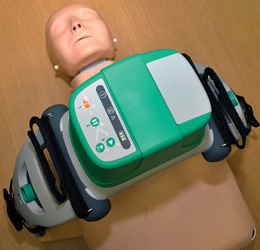 Two things have to happen almost immediately for a successful cardiac arrest save: a 911 call and CPR. For 35 years Ken Wentzel repeated this fact in the CPR segment of his health class at Mt. Lebanon High School. This fall, the retired teacher proved how true those words are when he became a case study of a  “perfect save.”

It started when Wentzel headed out for a bike ride. Not far from his home on Scrubgrass Road, he began experiencing trouble. Tony Mazurek, a Mt. Lebanon Public Works employee, was coming home from work and spotted Wentzel standing by the road.

Mazurek isn’t sure why his gaze kept returning to the man, but as his car started up the street he saw Wentzel keel over into traffic. “I jumped from my truck and was on my phone,” Mazurek says of his immediate response.

As Mazurek spoke to a 911 operator, Wentzel began to turn blue. Although Mazurek had received CPR training through the municipality (all municipal employees are certified in CPR every other year), he momentarily froze.

“Unless you’re a paramedic, [CPR] goes out of your head,” he says of that moment when you realize you’re in a life-or-death situation. 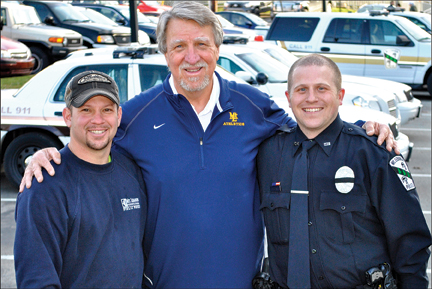 Yet, Mazurek remained calm enough to do what needed to be done. While he held the man’s head and kept the 911 operator informed, a woman who also had stopped  began chest compressions. As luck would have it, an off-duty paramedic from Scott Township was passing and stopped as well. Within 90 seconds, Mt. Lebanon Police Officer Ben Himan arrived with an AED to shock the man’s heart, and by the time an ambulance arrived 60 seconds later, Wentzel had a pulse again. At St. Clair Hospital, doctors inserted a stent into his heart and induced protective hypothermia, which lowers a patient’s body temperature to reduce the risk of injury to tissue following a period of insufficient blood flow.

Three days later, Wentzel walked out of the hospital. He recalls little of the incident, but says that he was in good health and that the week before the attack, he and his wife had returned from a month-long trip in which they biked daily. “We were riding in Acadia National Park and there are some very remote areas there,” he says. “I have no doubt that if this had happened while we were [in Acadia Park]  I wouldn’t be here.” Wentzel adds that after teaching an estimated 3,000 kids how to perform CPR, this might just be a case of “what goes around comes around.”

“Every link in the chain of survival was there… early detection, early contact, early AED. Everything that could go right, did go right,” says Medical Rescue Team South Authority Director Todd Pritchard, adding that the survival rate with no deficiencies for this kind of incident is usually about five percent.

Those odds may increase thanks to a new device that MRTSA added to its arsenal shortly after Wentzel had his heart attack. Purchased with funds from an anonymous grant, the $13,900 LUCAS Chest Compression System supplies constant, more efficient compressions than a person could. LUCAS can sustain a higher blood flow to the brain and heart compared to manual compressions and, best of all, it never gets tired. 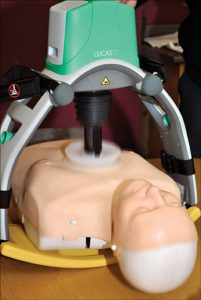 LUCAS, which stands for Lund University Cardiac Arrest System, was the brainchild of Norwegian paramedic Willy Vistung who began work on the device in 1991; in 2007 it began being used in the U.S.

The LUCAS device will be carried by the MRTSA supervisor and takes 30 seconds or less to apply.