Mt. Lebanon High School Senior Deborah Fu was selected to perform with the All-National Orchestra in November. Fu, a Pennsylvania All-State Musician last year, is the first Mt. Lebanon student in many years to represent the district in this prestigious national ensemble. The National Association for Music Education All-National Honor Ensemble represents top-performing high school musicians from across the country. The 2022 ensembles will meet at the Gaylord National Resort & Convention Center in National Harbor, Maryland under the leadership of top conductors in the field of music education. The Mt. Lebanon School Board commended Fu for her achievements.

The Mt. Lebanon School District’s Extra Mile Award for November went to crossing guard supervisor Sharon Kroner. Quoting from a nomination for the award, school board president Jacob Wyland, at left, read, “Sharon goes above and beyond making herself available to us in a time of need, or to make a timely adjustment when school arrival or dismissal is impacted by weather or any type of emergent situation …   She is able to easily recall which stop will need coverage on a certain day and takes pride in being able to troubleshoot to ensure that no children are put at risk during arrival or dismissal times.  Not only does she supervise the guard staff, but you will often see her filling in for her colleagues and going above and beyond to get the job done.” 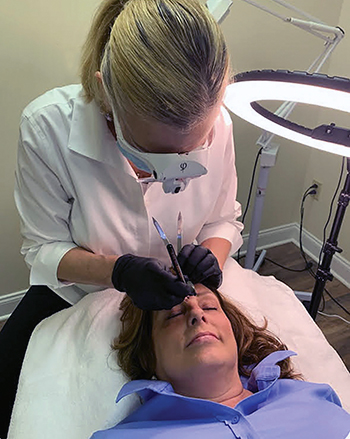 Maria Gaygan, owner of Elixir Hair Artistry and Design on Washington Road, has opened a new location dedicated to microblading. The Ultimate Arch Microblading is at 91 Fort Couch Road, near South Hills Village. Microblading gives the illusion of a facelift without all the expense by creating new brows, correcting the look of old brows, or fixing patchy spaces. “Eyebrows make an incredible difference in a person’s appearance because they frame the eyes. Brows look especially amazing when they’re done with the correct color with an ideal uplifting effect. It can change your life,” said Gaygan.

She started doing microblading when she realized how many women over 50 have no natural brows, either from cancer treatments, alopecia, over-plucking or hair loss from estrogen loss in menopause. An initial consultation determines who’s a good candidate for microblading.

www.ultimatearchmicroblading.com or 412-726-8072. Hours by appointment only.