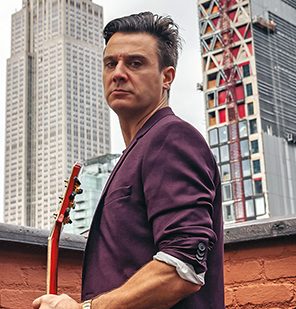 Mt. Lebanon native and jazz guitarist Andy Bianco will come to town to celebrate the release of his latest CD, New York Stories. He will be performing at Con Alma in Shadyside on Friday, April 24. Bianco created the Phillip Bianco Memorial Music Scholarship in memory of his father, a Mt. Lebanon musician and educator who founded the high school’s jazz ensemble. The scholarship gives money to young adult music students through the Keynotes Foundation Scholarship Competition in Pittsburgh. You can purchase New York Stories online at ffm.to/704onnr.

Rescheduled Keynotes of South Hills is having its annual fashion show and luncheon on Saturday, June 13, at St. Clair Country Club. Tickets are $35 and the party starts at 10:30 a.m., with the luncheon at noon. Proceeds benefit Keynotes’ scholarship fund. To make a reservation, call 412-491-7250.

Elinor Donalson, Hazel Drive, was honored by the DAISY Foundation, an organization that promotes awareness of autoimmune diseases. A DAISY Award recognizes nurses worldwide who provide extraordinary care. Donalson, a registered nurse with VA Pittsburgh Health Care System, was nominated by the family of Edward Meggett, a Marine Corps veteran whom Donalson cared for during his heart transplant.

Academy Avenue resident Kim Amey has been appointed deputy director of the Carnegie Science Center. She has been with the center since 2008, starting as a project manager in the exhibits department, then becoming senior director of strategic initiatives, serving as the lead for multiple capital campaign projects, including construction of PPG Science Pavilion and renovation of The Rangos Giant Cinema. Amey worked for seven years with the Sports & Exhibition Authority of Pittsburgh and Allegheny County. She holds a Master of Science in Public Policy and Management degree from Carnegie Mellon’s Heinz College, where she was awarded the Stephen M. Lauble Community Fellowship, established to encourage CMU graduates to choose careers that contribute to the economy and environment of Pittsburgh’s neighborhoods.

Serve2Cure: A Rally to Ace Cancer, is an annual event at the Mt. Lebanon Tennis Center. Since its inception in 2011, the event has raised more than $150,000. Last year’s beneficiary was the Cancer Caring Center. Serve2Cure committee members presented the center with a check for $20,000. Find details for this year’s event at serve2cure.org.

SCHOOL NOTES Mt. Lebanon High School’s annual art show, which features hundreds of works from AP art students and from other artists, is Friday, April 24, from 7 to 9 p.m., in the high school’s center court. New this year are two murals, a stop-motion animation sequence and a living portrait gallery, where students costumed as famous portraits will walk around inside of “frames.” This will likely be cancelled or rescheduled due to COVID-19.

Mt. Lebanon High School sophomores Melanie Rayl and Michael Mylen advanced to the final round in the Pittsburgh Public Theater  Shakespeare Monologue and Scene Competition. The competition draws more than 1,000 participants in elementary, middle and high school divisions. Rayl and Mylen’s scene from A Midsummer Night’s Dream was one of five selected for the finals.

In addition to Rayl and Mylen, 11 Mt. Lebanon students received honorable mention for their performances.

Lynch, a former Morrison Drive resident who now lives in Upper St. Clair, loves to enter the Pittsburgh Post-Gazette’s caption contest. A drawing appears in the paper and readers have a week to give it an apt caption. Winners get a mug and are saluted in print.

In the last 13 years, Lynch has won 33 times. This caption didn’t win, but Lynch thought Mt. Lebanon Magazine readers would get a kick out of it. He also enters the famed New Yorker caption contest but has only made it to the “You Be The Judge” level. He has yet to win that one.