Perhaps you have driven down Kelso Road and done a double take near the intersection of Bethany Drive at the sight of a massive abstract sculpture of a man lovingly cradling a woman in his arms. Titled “The Lovers,” the white granite piece is the work of Guy Bellaver, 68, a nationally known monumental sculptor who grew up in Mt. Lebanon. 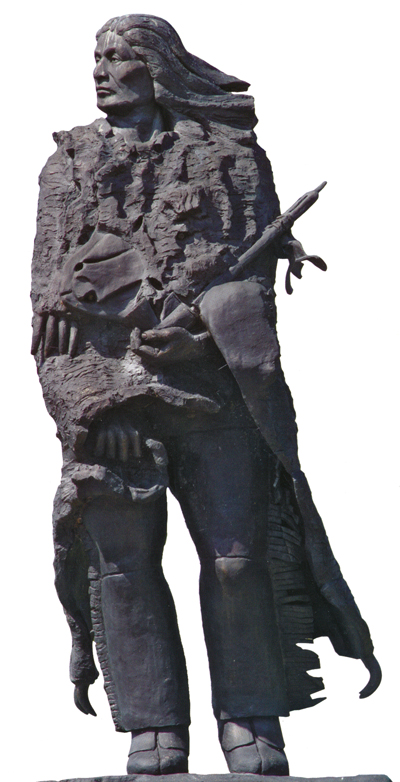 Bellaver, now of St. Charles, Illinois, works in many media, including stone, metal, wood, bronze, painted wood and fiberglass and mixed media. His pieces range from tabletop size to over 18 feet high and are in public spaces—museums, churches, colleges, corporations and hospitals—as well as private collections around the country. They are varied in style—some pieces are abstract, while others are liturgical or representational.

One of his earlier pieces, “The Lovers,” sits on his aunt’s property next door to where he grew up. He stopped in Mt. Lebanon recently between a visit to St. Vincent College, where a liturgical sculpture he created was dedicated, and a trip to his wife, Elizabeth’s, reunion at Denison University. They visited relatives and spent an afternoon cleaning “The Lovers,” for which Elizabeth, who grew up in Upper St. Clair, seems to be the perfect muse.

Those who knew Bellaver in high school might at first be surprised to learn he has spent his life working in the fine arts, including taking master’s level classes at Carnegie Mellon University and the School of the Museum of Art in Chicago; he was a shop guy. On second thought, the enjoyment of working with his hands in metal or wood shop seems to translate well into sculpture.

It was not a seamless transition, however, says Bellaver, who had no real experience with fine art growing up except for the paint-by-numbers paintings he did during a yearlong bout with rheumatic fever.

Did he ever think seriously about becoming an artist? “No, there was no money in it,” was his feeling back then.

After high school, he enlisted in the Army and upon discharge earned his B.S. in economics at St. Vincent. He went to work for Xerox, where he met his wife. They started a family (they have three grown children, 33, 32 and 28). He recalls that on a whim one day, he got some paints and created an image of a double rainbow. “How do you do this?” he recalls thinking. “Is it any good?” So he asked an art teacher to critique it. “I like it,” the teacher told him—“either you’re a genius or you’re awful lucky, because you don’t just up and paint something like this.”

So Bellaver’s journey as a professional artist began, and as he says, “Every day spent as an artist has been a joy.” To his pleasant surprise, he has found that it is possible to make money while making art—his pieces are worth many thousands of dollars.

Currently, he is working on a sculpture in St. Charles that will “honor people who have donated their lives to the community,” he says: “I like to design so that people can see themselves in their own town.”

Bellaver—whose youthful, athletic looks belie his age—plans to return to Mt. Lebanon this month for his 50th high school reunion. Perhaps he and Elizabeth will stop by once again to be sure “The Lovers” also are aging well.