Deep below the United States Capitol, the Cannon Tunnel connects the members of the House of Representatives from their offices, located on Independence Avenue, to the Capitol proper. The tunnel is lined with hundreds of pieces of art from congressional districts all over the country, which change annually to feature the winners of the Congressional Art Competition.

This year, Mt. Lebanon senior Alayna Hollist created the piece that was chosen for our district, PA-17, represented by Conor Lamb. Her Prismacolor portraiture piece, “The Candy Shop,” was inspired by 1950s Americana—a panel of judges selected it out of a group of 52 submissions, which included paintings, photographs, drawings, mixed media and stained glass from around the district.

“This competition is a great opportunity to display the significant artistic talent we have here in southwestern Pennsylvania to the nation, and I look forward to having Alayna’s artwork on display every day when I walk to the Capitol to vote,” says Lamb. 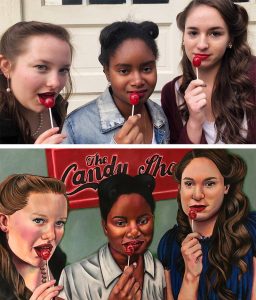 Hollist, Lebanon Avenue, has been studying art for many years and hopes to go to art school when she graduates. For her winning piece, she took photos of her friends, sporting 1950s hairstyles, eating lollipops in front of a nondescript background. Then, when she was drawing them, she added the Candy Shop sign in the background to emphasize the vintage look.

“I had been learning about the ‘50s during history class. I always thought they were really wonderful, but just like any decade, they had a lot of problems,” says Hollist. “I wanted to capture the innocence of the time.”

Hollist created the piece for her AP Art class. The curriculum required each student to create 24 pieces, spending about 24 hours on each piece, but she remembers spending almost double that amount on “The Candy Shop.” Her teacher, Jen Rodriguez, approached her about submitting the piece, since she thought its “All-American” look would match the overall mood of the gallery. Hollist was hesitant, as she had just sent five of her best pieces to The College Board for her AP Art exam, so she couldn’t pull from her favorites.

The ceremony for PA-17 was on May 13 in Gibsonia, and Hollist was delighted when her friend and classmate, Natalie Callahan, scooped up fourth place—meaning her piece, “Getting Ready,” will spend the year in Lamb’s office in Washington, D.C.

“I was very surprised when they called my name [for first place],” says Hollist, laughing. “Even my Mom said, ‘Huh. I didn’t think that was your best work’.”

As the winner for PA-17, Hollist got to go on a trip to Washington, D.C., where she visited the National Portrait Gallery, the United States Holocaust Memorial Museum, spent time with friends and family and then went to the reception for the winners. After the dinner, Hollist got the chance to go into the tunnel to see her piece hanging with more than 430 others from around the nation.

“It was really beautiful. There were so many good pieces,” says Hollist. “I feel really honored. It’s pretty crazy to think that they looked at my piece and thought they would include it in the bunch.”