Frank Kirsopp, 87, is a Mt. Lebanon guy through and through. Born and raised here, (Mt. Lebanon High School Class of 1952), he eventually went on to raise his own family here, while making his career as an Industrial Arts teacher for the Mt. Lebanon School District. Then his wife passed away, and he eventually moved to Asbury Heights, a retirement and senior care facility on Bower Hill Road.

Lillian “Bobbie” Bitters, 85, was, for the past 20 years, a Mt. Lebanon gal. She has lived in various places around Pittsburgh, raising three children, and welcoming two grandchildren and four great grandchildren. She found herself here, in a house on Sylvandell Drive, when her husband passed away and she also, eventually, moved to Asbury Heights.

And today, Frank and Bobbie got married at the Hickman Chapel at Asbury Heights. 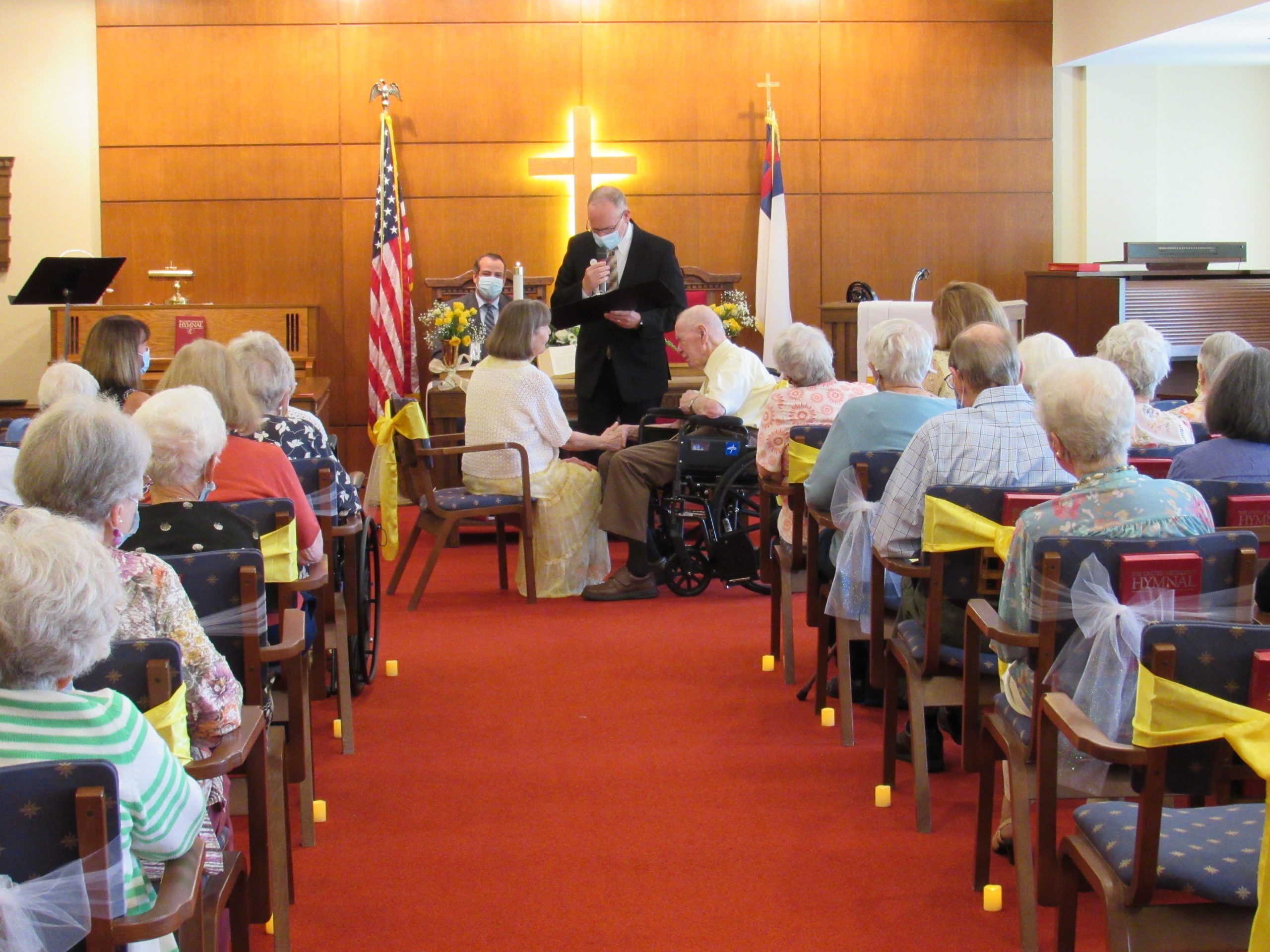 “I’m not nervous about getting married, I’m nervous about everything going okay,” said Bobbie in an interview last week. She was worried that COVID restrictions might tighten, putting a damper on the big day. Indeed, since then, Asbury Heights had to ask the press not to attend, as they are limiting outside visitors. But the wedding went on as planned.

“They’re doing it quite fancy. They’ve got the bride and groom glasses, and the arch … We’re getting the main dining room and everybody is invited!” said Bobbie.

The couple cannot recall the exact moment that they knew they were in love. They had known each other for many years, but their relationship began nine years ago, after Frank invited her to a pig roast at the Masonic lodge where he was a member. Their love blossomed and, four years ago, Frank popped the question.

“We were dealing with a few physical problems. That kind of caused us to put things off,” said Bobbie. Frank was diagnosed with Parkinson’s Disease, but they still enjoyed participating in activities at Asbury Heights and spent as much time together as they could, talking for hours and watching their favorite shows, including Two and A Half Men, Gunsmoke and The Andy Griffith Show. 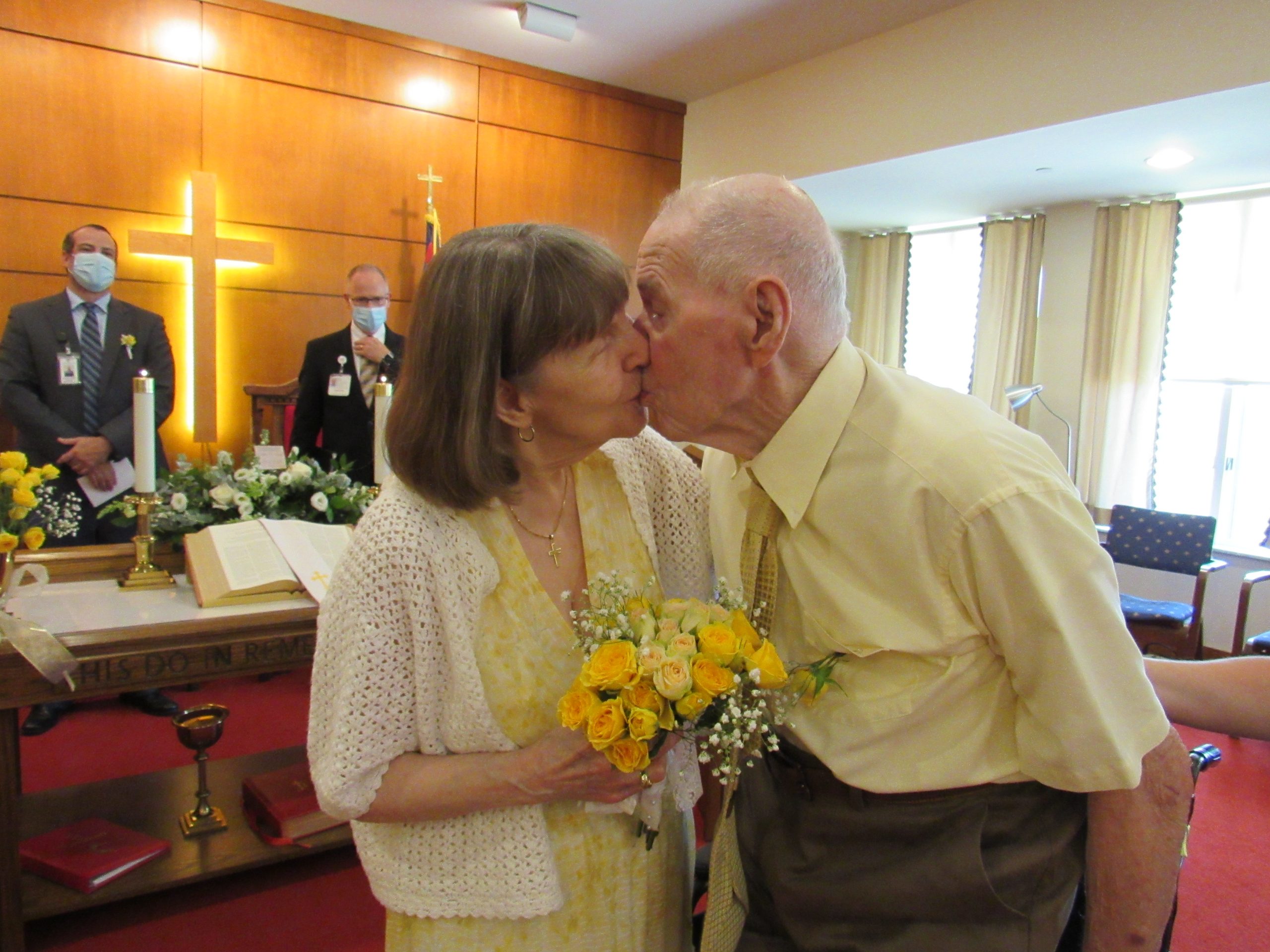 Then the pandemic struck. Just like in all senior facilities all around the United States, restrictions at Asbury Heights were necessary to keep the residents safe. Activities were put on hold, and then Bobbie and Frank had to be separated in the fall, when Frank contracted COVID. Frank recently had to be transferred to a different building on the Asbury campus because his Parkinson’s had progressed. He was admitted to Commonwealth Hospice in January of this year.

Frank’s hospice social worker, Deb Russo-Dicken, was spending time with him one day, asking him questions about his life, when she realized Frank was harboring one major regret—not marrying Bobbie. Restrictions had been loosening as residents received their vaccines, so she reached out to Linda Atkins and Teresa Valentino in the Asbury Heights activities department to see if they might be able to do something to help.

They contacted Frank’s daughter, Pamela, who supported the idea of a wedding. Then they talked to the couple, who were ecstatic. So they started planning.

“It’s been a long haul. We weren’t able to see each other … everybody is down. We couldn’t all get together for a long time, to play cards, play games. And now, all of a sudden, it’s just this major party and everybody is all excited,” said Bobbie. “They’re more excited to have something to look forward to and a party coming up than us actually getting married.” 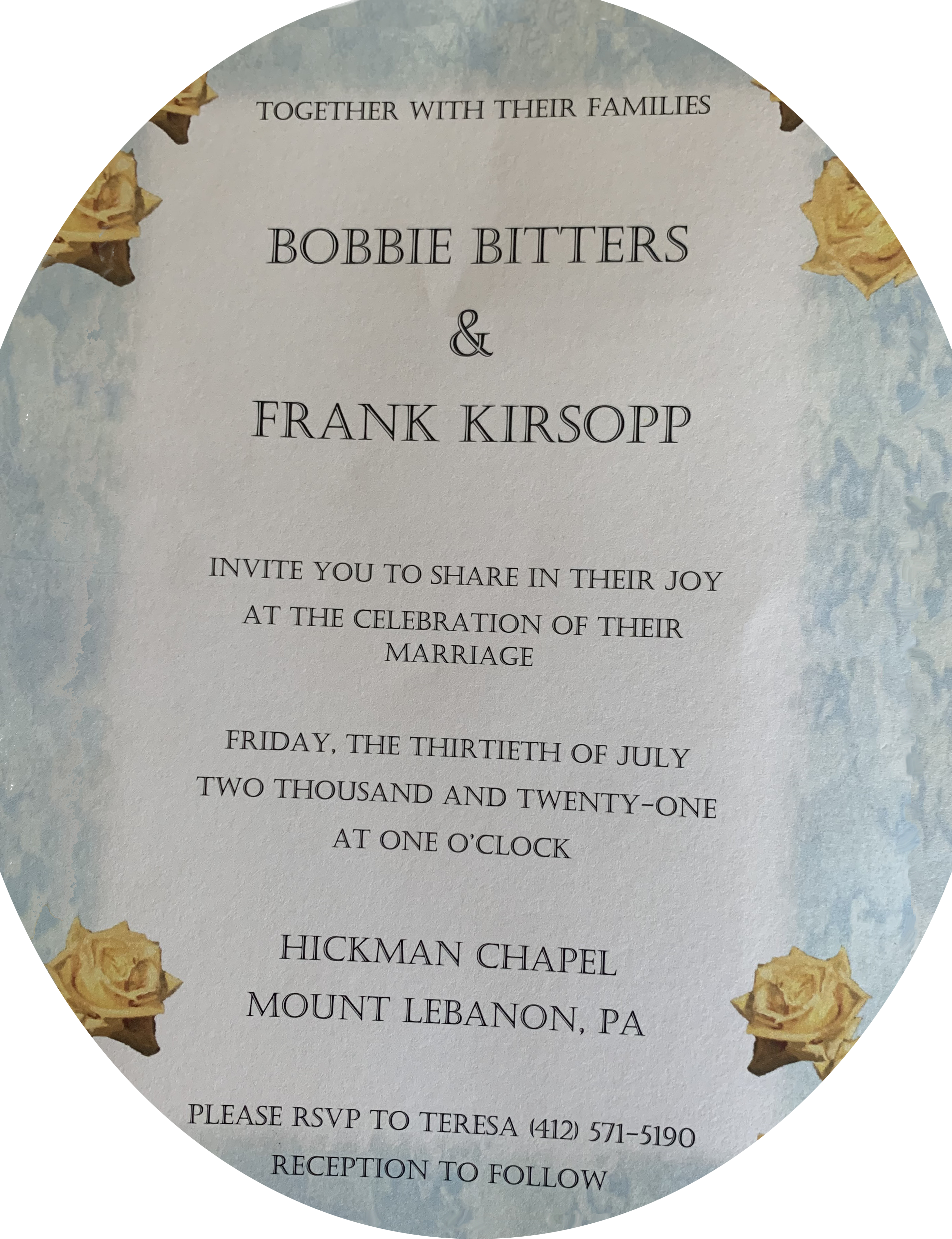 Last week, Bobbie estimated that more than 60 Asbury Heights residents were planning to attend. The activities department created invitations and delivered them to the residents. In an effort to keep everyone safe, the couple kept outside guests to a minimum and asked that the guest list be limited to those who are fully vaccinated.

“I’m wearing a yellow dress, so they wanted to make everything yellow,” said Bobbie, pointing to the yellow flowers on the invitations. The ceremony was at 1 p.m. today, followed by a reception with a wedding cake and a cookie table.

“We are very, very happy and have Commonwealth Hospice and Asbury to thank,” said Bobbie after the ceremony.

For Frank and Bobbie, their nuptials simply confirm their feelings for each other. Frank and Bobbie will continue to live separately, as Frank is in personal care and Bobbie is independent. But she expects she will be at Frank’s apartment “all the time,” just like she has been, as often as she can, for the past few years.

“If there’s something you want to do, don’t put it off,” Bobbie said. “Because I couldn’t wait to get older. You’re out of debt. Your kids are grown and married. And you’re going to travel, you’re going to do all these wonderful things. And then old age sets in. And then somebody dies. And then you get arthritis or Parkinson’s … So I’m going to give you that advice. Do it! Don’t wait.”