Members of the Mt. Lebanon Police Department played a special role Tuesday as “Guardians of the Flame,” carrying the Special Olympics Pennsylvania torch on a 2.9-mile sprint as it made its way from PNC Park to the start of the Summer Games in State College.

“Today is about supporting the athletes of Special Olympics Pennsylvania. It means a great deal to us,” said police Chief Aaron Lauth.

More than 500 officers from across the region will carry the torch along 53 segments for the 150-mile journey to the Summer Games Opening Ceremonies. Eight Mt. Lebanon officers participated in the fourth leg of the Be a Fan Torch Run, along with officers from Bethel Park, Upper St. Clair and Castle Shannon. 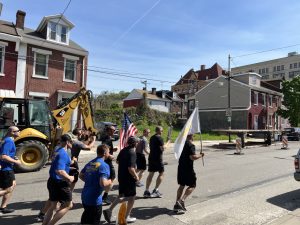 For Lauth, the event is personal. His brother, Martin, swims with Special Olympics Pennsylvania.

“I see the benefit that it has for Martin, as far as keeping him active and seeing the groups of friends that he makes and maintains through his athletics at Special Olympics,” Lauth said.

Mt. Lebanon police have participated in the Law Enforcement Torch run for more than 10 years.

Watching the athletes participate in their various events, Lauth said he sees the pride that they have and the heart that they put into each activity.

“It’s the least we can do to support them, so they can go out and compete and have those social networks amongst their friends and family,” he said.

You can still show support for the Mt. Lebanon team. Donations are being accepted here!