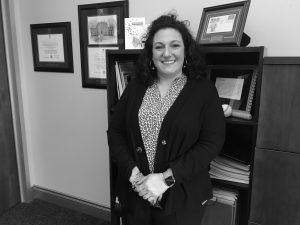 Lisa Hernandez of Jefferson Drive has opportunities impossible for many others in a legal career: she is a preventer of crisis. Her position as Title IX coordinator for Robert Morris University is designed to protect all civil rights named under a 1972 law explicitly granting men and women equal access to academic programs that receive federal money.

Hernandez advises students and employees of the university as a defender of their federal rights to lives free of discrimination, particularly discrimination as it relates to gender and sex. It is a cause so important to her that she passed up the chance to apply for a federal magistrate judgeship to fill the role.

“I’m committed,” she said. “I love this arena, not because of the challenging and sort of wrenching stuff we have to hear, but I love the idea of being able to impact young people: not just women, men, too.”

The role of champion for the underdog was not one Hernandez set out to fill as a law student. She found her vocation when serving as a clerk for a Washington County judge with a family court docket. Because family courts are overwhelmed with cases for custody disagreements and protection orders, clerks try to mediate and resolve cases before they come into the courtroom.

“It was when I became aware of how powerful the legal system could be,” she said. “I had a sense for what could be possible with law.”

Her career then turned toward advocacy for men and women who need a champion. “It wasn’t that far a leap to represent a coal miner against a multimillion-dollar company,” she said. “I don’t like when people are taken advantage of, used or exploited.”

These feelings of fairness have ultimately guided Hernandez’s professional choice to serve others first and foremost each day.

Lisa Hernandez’s recommendations for championing yourself:

Remove the word sorry from your vocabulary, except when an event is really your fault. It mutes your message. “I do this a lot in emails,” she says. “I go back, and I delete it—it is an easy thing to do to immediately appear and feel more powerful.”

Have a “No, thank you” on your tongue at all times. It’s much better at the jump to say, “Hernandez says many people, particularly women, are trained from birth to be polite and not offend, so they are sometimes at a disadvantage when asked for commitments, such as volunteer hours or a date, she says. Declining firmly is a better practice than offering excuses.

Recognize that many others in the community are stronger than is visible because they have faced tremendous trauma they are carrying around or hiding. Especially with women, abuse and other experiences are often borne alone.

Know how layered and multidimensional you are. It is important to honor personal accomplishments and strengths.

Courage is not a lack of fear; it’s doing it anyway. Hernandez recommends being brave in reaching out for the opportunities that are interesting and committing to participating fully.

Show up imperfect. Men are more likely to take greater risks and expect others to accept them as they are, while women often won’t apply for a job unless they match nearly all of the criteria. Hernandez encourages everyone to use experience a teacher. “Sort of fake it until you make it.”

Practice radical candor, a concept and book title by Lisa Scott, in which direct, clear speech is a central goal for communications of all kinds. It is life-changing to be honest with people.

Regret is OK. Not every experience will be one that seems the same upon reflection as it did in the moment. Perspectives and feelings change.

Seek the company of others, often. Having real conversations and connection with people is infinitely more valuable than the fighting on social media.

Remember that brains don’t fully develop until the age of 25. Teens often think they know how they will feel after they make a choice, then have intense emotions later that they didn’t expect. Accept that those feelings are legitimate.