As I hustle to my seat, I pass the ticket counter and ask the vendor if Brigden is in the building. “Oh yes,” she says, “Tracy’s flying around here somewhere.”

A mainstay of Pittsburgh’s drama community since she took over from 20-year artistic director Marc Masterson in 2001, Brigden is indeed flying high. Tracy Brigden, who lives in Virginia Manor with her husband, Michael DelGaudio, and their daughters, 10 and 12, thrives in the bustling theater environment and her “rare dream job,” as she describes it. “My job is different every day,” she says, adding that she enjoys using “different brains” for the various challenges she faces as artistic director.

Brigden has to shift those brains into overdrive to bring newly commissioned, contemporary plays—City Theatre’s signature—from print to live production. She begins by courting nationally recognized playwrights with promising scripts. She then carefully selects a mix of plays to appeal to diverse audiences. She continues the process by casting talented actors and meticulously overseeing every aspect of each play. And she directs many of the plays.

Cultivated by Brigden’s vision, creativity and determination, this regional theater presents six plays during its main season—none of which is more than five years old and some of which are world premieres. Her goal: to engage audiences with novel storytelling, skillful acting, aesthetically pleasing sets, and enjoyable music.

Brigden calls City Theatre “fresh, innovative, and now!” Noting that Pittsburgh is fortunate to have unique, live theater offerings, she adds, “The City Theatre experience is thought-provoking, comical, historical, wacky, and dramatic. If you take in the whole season of plays, you’ll run the gamut of experiencing many different emotions—so entertaining!”

Brigden’s love of theater began when she was growing up near New York City. Her parents shared their passion for the arts with their daughter, visiting museums, going to plays and taking in concerts. “Since then, I’ve been a lover of the arts—literature, visual arts and music,” she says. Reflecting on her career choice, she says, “I knew I wanted to be involved in all aspects of having a play come to life.”

As she readies City’s 40th anniversary season, which kick off with Outside Mullingar, October 12-November 2, Brigden feels fortunate to work in a culture filled with meaningful work, gifted colleagues, challenges and excitement. An environment where, she says, “I can dream big.”

Visit www.citytheatrecompany.org or call 412-431-2489 for tickets and information about the season. 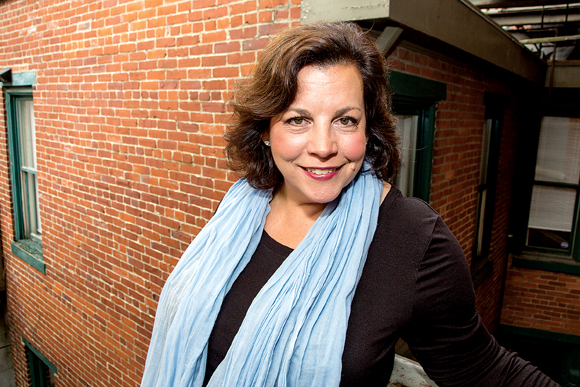 Living the Dream: An Interview With Tracy Brigden

How would you describe yourself in three words? “Creative. Nurturing.” (She pauses and gives a “hmm.”) “Driven.”

What is one of your proudest City Theatre moments? “We’ve maintained a long-time relationship with Pittsburgh native and singer/actor, Billy Porter—he’s done various things with City Theatre through the years. When he recently won a Tony for his role in the Broadway musical, Kinky Boots, he thanked City Theatre and me!”

Do you have a favorite City Theatre play? “It’s like children—it’s

hard to pick a favorite.” She laughs. “A certain moment stands out… (Her tone becomes serious.) The first play I directed when I came to Pittsburgh was The Clearing. It’s a play about conflict between two tribes who are warring. It was September 14, 2001 (three days after the September 11 attacks on America.) When I gave the curtain call speech to a packed audience, I thanked them for gathering during this sad, trying time—it was moving…intense…and cathartic for everyone involved.”

What production was most challenging? “We commissioned an Adam Rapp play called Gompers. It was an extraordinary two-tiered set of four apartments and six locations. The play depicted a failed, rust belt town— a city of people caving in on themselves, struggling with corruption, addictions. I ultimately saw the play as a message of hope because one character is able to get out of this corrupt place.” (She pauses.) “The play was truthful in a graphic way at times. It was a play that pushed some subscribers away yet attracted some newer viewers.” (She pauses again then continues.) “It’s hard to push the envelope, but I feel I have to sometimes in order to move the theatre forward with inspirational plays and important messages.”

Is it difficult to balance personal life with professional life? “Yes! The addition of my family came all at once. Now I’m working full time, and I’m a full-time wife and a mom of a 10 and 12 year old! It’s difficult to balance, but fun at the same time—it would be harder if I worked in a culture that was closed.” (She pauses and laughs.) “It’s the laundry and cooking that’s tough!

What is your favorite thing to do when you’re not at the theatre? “I enjoy entertaining friends and family. I can now because of this great outdoor space at my Mt. Lebanon home.” (Tracy has lived in Mt. Lebanon for over two years, moving from the South Side because she “was ready for a little grass, some trees, and a garage door opener.”)

What little things bring you lots of joy? “I love walking in the back of the [theatre] house at end of a performance and hearing the audience cheer —I need a little dose of that. I love the first day of rehearsal when all of the artists are in room together and we read the play for the first time; it’s a great moment.” (She shifts her thoughts to home life.) “I love sharing my favorite plays and movies with my kids—like Singing in the Rain. I love that they enjoy it. I love that my dog, Luca, still greets me at the door, whole body wagging…cancer and all.”

What stresses you? “With all that is going on in the world, it stresses me that I might not be contributing enough to be socially active in world affairs.” (She pauses.) “Do I need to go out and produce plays to help with the violence at schools? Can I do enough to impact these types of important issues?”

How do you unwind and relax? “It used to be yoga.” (She laughs, suggesting her time is limited.) “I like to walk and be outside. I like to garden—keep adding to it. We [family] enjoy estate sale-ing. We furnished our house with mid-century modern finds.”

Any pet peeves? “In general, I don’t like the word ‘no.’ It’s not a word that allows for creativity. ‘No’ doesn’t lead to new paths…let’s work together and see what we can do.”