Would you ever buy a home sight unseen? How about if the home was in a suburb of a city that you only visited once during a job interview? And on top of that, would you move all your possessions, your cars, your 2-year-old and your dog across the country to do it?

Liza Prijatel Thors and her husband, Mark, did exactly that when they moved from Los Angeles into their home on Sleepy Hollow Road in January. Regardless of all of the unknowns, the couple was confident in their decision to leave their LA lifestyle and its two-hour commutes behind.

“We did a little bit of research, but it didn’t take much,” says Liza. “I love an urban environment … at the end of the day, we both need to not feel like we are in suburbia. Mt. Lebanon has so much charm, a main drag, great stuff nearby—it’s more diverse than other places, with wonderful schools and room for Desmond to play.”

As if in agreement, Liza and Mark’s son, Desmond, started belting “B-I-N-G-O and BINGO is his NAME-OOOOOO,” while performing a little dance for passersby in the window of Orbis Coffee.

“This kid’s got rhythm,” Liza says, laughing, after we joined Desmond in another lively chorus. Desmond loves music—particularly playing his mini drum set—because he is constantly surrounded by music in his home.

Liza has an extensive background in show business, theater and the music industry—the family moved to Pittsburgh because she accepted a job at the Pittsburgh Symphony Orchestra. Mark, who works from his studio at home, is a composer. He composes music for television, specifically for CBS and the NCIS franchise.

“I absolutely love writing for TV,” says Mark. “It’s really nice to be able to put my songs into a library and just have shows pick from it. Of course, I watch NCIS, and every time I’m really listening [for my music], I think, ‘Is it going to be loud enough to hear this time? Will they be talking over it? Probably.’”

In his spare time, or when NCIS is not in production, Mark teaches piano lessons and watches Desmond. Since moving to Pittsburgh, the two of them have particularly enjoyed watching Mr. Rogers’ Neighborhood together. “It’s actually Desmond’s favorite,” says Mark. 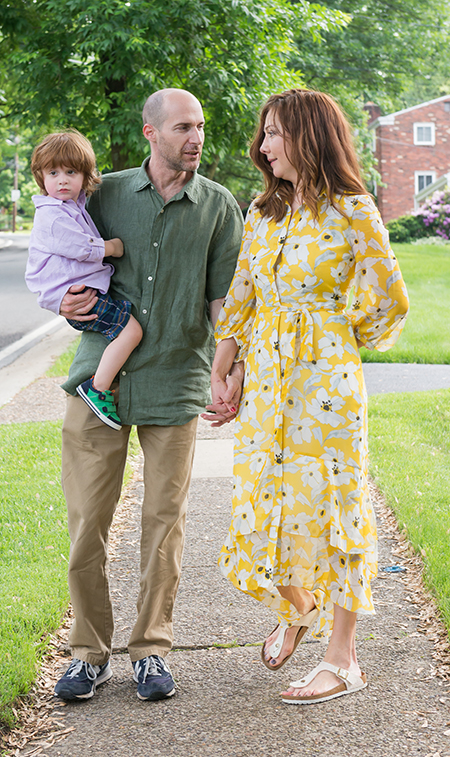 Mark grew up in Long Island, and he was a performance major at the Berklee College of Music in Boston when he started dabbling in music composition. He then moved back to New York City, and he was playing the piano at a Phish after-concert jam one New Year’s weekend when he met Liza. “We wouldn’t have known each other if it weren’t for music,” says Liza. “I wouldn’t have fallen in love with the pianist on the stage.”

At the time, Liza was a senior theater major at UCLA. She decided to move to New York for grad school to continue to pursue her arts education and be closer to Mark.

Liza’s career in publicity began with the Universal Classics Group, where she worked with Renée Fleming, Andrea Bocelli Elvis Costello, and on the Grammy Award-winning recordings of Wicked and Monty Python’s Spamalot. She then went to work in public relations for Susan Blond, an Andy Warhol protégé, as associate vice president of Susan Blond Inc. After that, her seven-year job as a partner at Rebecca Davis Public Relations brought her back to Los Angeles, where she and Mark lived for nearly three years before the opportunity opened up at Pittsburgh Symphony Orchestra.

“The symphony flew me out for the interview, and I was completely charmed by my future bosses and the city,” says Liza.

“I’ve been following the symphony since my first days at record labels … without even provoking it, I have had many people say that Pittsburgh has the best orchestra in the country. I’m proud to be here and tickled to have the opportunity.”

In her new role as VP of communications for Pittsburgh Symphony Orchestra, Liza is responsible for overseeing PR, national and regional initiatives involving conductor Manfred Honeck and day-to-day social and internal communications. “It’s very rewarding to pick up the phone here in Pittsburgh and have reporters actually want to talk to me,” says Liza. “In New York and LA, you get lots of empty emails.”

But adapting to Pittsburgh life has not gone off completely without a hitch. Liza’s biggest trouble has been learning to navigate the city. She was embarrassed to admit how she recently tried to drive Honeck to an interview at WQED in Oakland, made a wrong turn and almost ended up at the Pittsburgh International Airport before she realized she was lost.

“I’ve also learned to beware the potholes,” says Liza, who was annoyed to have experienced two flat tires in her first four months of living in Pittsburgh.

Liza and Mark are looking forward to their first Pittsburgh summer, particularly taking Desmond to the Carnegie museums. Each of them is starting to settle into their new city and routine, and they have picked up a couple of tricks along the way.

“When you move somewhere new, you can’t be afraid to ask questions or to rely on colleagues who have been here for a long time,” says Liza. “Also, it sounds silly, but watch the local news. And get involved in professional organizations, even if you don’t want to actually join. It just helps to get you out there … Pittsburgh is different from the vastness of LA or New York. It’s a fantastic city in a manageable area, and for us, it has proven to be such an amenable and welcoming city.”