Modern-day athletes tend to be keenly aware of nutrition. What, when and how much to eat. Protein, carbs, hydration. Food intake on game days designed to optimize performance.

Mt. Lebanon native Parker Milner is a little different. A professional hockey goaltender, he doesn’t eschew food science for burgers and wings; quite the opposite.

He’s dedicated to his athletic career—he tends goal for the ECHL South Carolina Stingrays and has spent some time in the higher-level American Hockey League after winning two college national championships.

He’s also passionate about all things culinary. That’s right. He’s a goalie AND a foodie. He even has a side job writing about restaurant news for the Charleston, South Carolina, version of a website called Eater. 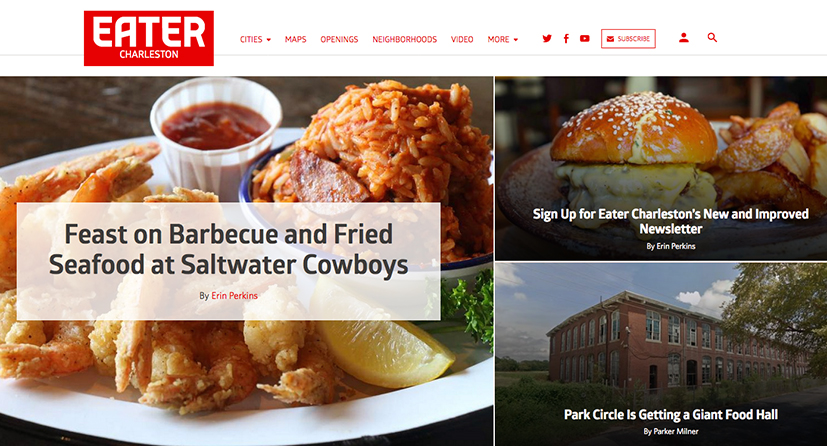 When he was at Boston College, Milner was more of a typical college athlete when it came to eating. After all, he was busy with school and with hockey. He won two NCAA championships with the Eagles, as a backup goalie in 2010 and as a key part of the title run in 2012.

For several summers after he turned pro, he roomed with college teammate Brian Dumoulin – now patrolling the blue line as a Penguins defenseman. The two began to develop their palates.

“We didn’t have the dining halls to rely on,” Milner says. “We had both learned to cook. That’s where we both started exploring that. The restaurant thing, we’ve both grown and gotten more into that the older we’ve gotten. It’s become a real passion for both of us.”

They remain close. Milner will be Dumoulin’s best man at his wedding this summer. They also remain partners in thyme.

While on break during the NHL All-Star weekend in late January, Dumoulin, his fiancé and their dog visited Milner in Charleston.

“It was nice to hang out with him, show him the good places to eat,” Milner says. “We got to a bunch of good spots.”

It’s not just about scoping out fine dining or expensive places.

“We love the unique stuff,” Dumoulin says. “We love trying new and different, and foods that we couldn’t cook ourselves. We go to upscale (restaurants), but we like going off the wall, too, and finding those hole-in-the-walls. Our focus is on, if we can cook it, then try to not get that. We try to go for something authentic or just off the wall. We try everything.”

Their roommate days were in Boston, and they explored both in the kitchen and around the city.

“We’re big on trying new things, making sure we live outside our comfort zone,” Milner says. “I love going to the same place twice, but if there’s a new place or a new dish I generally try to check those out.

“I remember in Boston one summer we went to an Ethiopian place that was pretty funky right by our apartment in the South End. Just in general, we’ll eat whatever kind of meat, whatever kind of sauce. We’re really just kind of trying everything.”

Dumoulin laughs when asked if he and Milner, when preparing their own food, mimic the fancy food presentation often found in finer establishments.

“We don’t really care too much about the presentation when there’s only a couple of us eating it,” Dumoulin says. “We get it on the plate, and we eat it. We pretty much just cook to satisfy ourselves. That’s good enough for us.”

Milner, who grew up on Vernon Drive, doesn’t get back to Western Pennsylvania too much. He’s heard from a few old pals about the still-vibrant restaurant scene in Mt. Lebanon and, from Dumoulin, about the rising foodie culture in general around Pittsburgh.

Tried and true Uptown standards Il Pizzaiolo and Aladdin’s remain favorites for Milner, who moved away after his sophomore year at Lebo High to concentrate on hockey and whose parents have since moved to New York.

While Dumoulin, one year younger than Milner, got drafted in the second round by the Carolina Hurricanes and later joined the Penguins as part of the Jordan Staal trade, Milner did not get selected in the NHL draft but went the free agent route.

He was part of the New York Islanders and now Washington Capitals organizations and has split his time between the ECHL and AHL.

Milner has gone to preseason training camps with the Islanders, where he faced shots from star center John Tavares, and with the Capitals, where he had the unenviable task in practices and scrimmages of trying to stop winger Alex Ovechkin, one of the best scorers in the game who is known for his blazing shot.

“It comes fast, that’s for sure,” Milner says of a shot by Ovechkin, who won the hardest shot competition during All-Star weekend. “He can put it wherever he wants. He’s a pretty insane hockey player, a presence to be on the ice with for sure.

“Rarely do you see a shot like Alexander Ovechkin. That was pretty cool to get to face that. I stopped him a couple of times. I think he got a couple by me for sure.”

With the Stingrays, Milner is hoping to get back to the ECHL championship, called the Kelly Cup. South Carolina has been to the final—and lost—two of the past three seasons, including last year with Milner.

With a few weeks left before the start of the playoffs in April, the Stingrays were doing well at 37-12-6-1, and Milner was thriving. He led the league with a 1.97 goals-against average, had a record of 20-4-3-0 with two shutouts and had a robust .928 save percentage.

“I’m really excited about the team we have this year and what we can do in the playoffs,” Milner says.

Getting back to the Kelly Cup finals, and especially a championship, would no doubt leave a good taste.