It’s amazing how fast a burning room can fill up with smoke. After just a few minutes you can’t see anything standing up, so you drop to your knees and your visibility goes up about 75 percent. Then a couple minutes later you can’t see anything from there either, except—if you’re lucky—the reflective tape on the gear of the guy three feet away from you. Heat from the fire follows the smoke, also coming at you from the top down, and without the thick heavy padding of your turnout gear you would quite literally start to cook.

I am finding this out on a deceptively warm Sunday morning in December, as a guest of the Mt. Lebanon Fire Department during a controlled burn at 1340 Cedar Boulevard.

Everyone at a fire scene has an assigned task. My task is to keep out of the way. Platoon Chief Chris Buttlar, a firefighter with more than 20 years experience, has been assigned the task of, I believe the technical term is “babysitter.” He’s also part of the team tasked with setting the fires inside the house, which gives him the official title of “arsonist.” One for the resume, Chris.

Even just standing and watching, there is a lot of stuff to keep track of. You need to keep an eye on your oxygen supply. I had 40 minutes of canned air at a normal respiration rate, and it was important to regulate my breathing to make it last as long as possible, monitoring the indicators on the mask and attached to the oxygen tank. There is a motion detector attached to each firefighter’s turnout coat, and if you go more than 30 seconds without moving, it issues a preliminary alarm. If you’re still for another 10 seconds or so, the device sends out an alarm and a team of standby firefighters, the rapid intervention team, will come looking for you. So keep moving.

If you don’t know what you’re doing, there are ample opportunities to injure yourself or someone else. Which is why the fire department invests a lot of time and resources in training each of its members, beginning with the 166-hour initial course and continuing for as long as there are fires that need to be fought.

Firefighter I and II, Vehicle Rescue, Trench Rescue, Hazardous Materials, EMT, Paramedic and Fire Instructor are just a few of the formal classroom courses. Also, every Monday evening the department holds training on some kind of fire and safety related task. And once in a great while, the firefighters get a chance to take over an empty house and burn it to the ground, giving everyone at the scene a taste of the real thing. 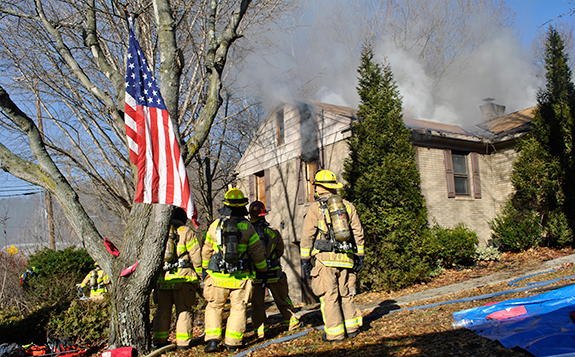 The yellow brick ranch house stood for 51 years at the corner of Cedar and Gilkeson. Mt. Lebanon purchased the house from the estate of late owner William Daniele in November 2013. Razing the house dovetailed with plans for the reconfiguration of the public works yard that stretches along that end of Cedar, a project that is expected to get started sometime this year. And because of the house’s isolation, at the end of Cedar with no immediate neighbors, it was a perfect venue for the fire department to stage a controlled burn.

“When houses are closer together, the radiant heat (from a controlled burn) would damage adjoining houses,” says Lt. Steve Lane. “That’s one of the reasons a chance like this is so rare.”

Before the house can be torched, the fire department had to do a very extensive inspection of the structure, and had to answer a lot of questions from Allegheny County before receiving permission to proceed. On the day of the exercise, Fire Chief Nick Sohyda walks each team of firefighters through the house, where hay bales and wooden pallets are stashed to serve as fuel for the fire, and briefs them on what to expect.

“The goal is for everyone to get the experience, to go inside at least once,” he says. “The only drawback here is we won’t be burning furniture or anything that contains fluorocarbons, so there won’t be any thick, heavy black smoke.”

I may have already mentioned this, but in my view the white smoke did a stellar job of making things hard to see. You mean it gets worse?

Along with the firefighters who are inside the house putting out the fire, others are stationed outside to keep the fire from spreading beyond the house. There is a rehab station, where firefighters can recover from the heavy physical demands of attacking the fire, and the rapid intervention team, whose sole job is to rescue downed firefighters. Each of the squads rotate from station to station to make sure everyone is as fresh as possible.

As each fire is extinguished and the next one lit, the atmosphere gets hotter and smokier. The plaster retains heat in the walls; the smoke and air moves faster, meaning the fire is generating more heat; the color of the smoke. “There is an art to reading smoke,” says Buttlar. “In different areas of the building, what the smoke is doing, what color it is, it all tells a story if you can read it. What’s on fire, where, how safe it is.

“They can only stay in there a short time, their gear is starting to heat up. When you’re in here 10 or 15 minutes, you can’t stand the heat anymore,” Buttlar says. Time to rotate in another team.

Forty minutes of oxygen bought me the chance to watch two teams come in and knock down the fire. When my time was up, I went on my way, and the firefighters stayed for a good five or six hours, getting the kind of training that’s as valuable as it is hard to come by.