don’t actually have meetings,’’ says David Bodnar in a reply to an interview request. “It is just a bunch of like-minded folks who love to ride, getting together to hit the road! ‘Meeting’ sounds way too formal for us!”

That tells you all you need to know about the Mt. Lebanon Cycling & Caffeine Club (MtLCCC), which organizes local bike rides on Saturdays and Sundays year-round. The Saturday ride leaves from Coffee Tree Roasters on Beverly Road at 7 a.m. for a 30-mile round trip to the Pittsburgh Zoo—stopping in the Strip District for more coffee on the way. The Sunday ride also starts at 7 at the Coffee Tree, before heading into Washington County for a 40-mile jaunt.

“The only requirement is that you are there for us to leave on time. If you come at five past seven, we won’t be there,”

says Bodnar, Bower Hill Road, one of the founders of the club. He started the group in 1988 with former resident Dan Carroll, when they both started feeling the wear on their bodies from years of running. That first summer, they did the Mon Valley Century, a 100-mile ride starting in Monongahela, and their enthusiasm for biking—and the Cycling and Caffeine Club—grew from there.

Now the club has more than 30 active members and 100 on its mailing list. In addition to its two standard weekend rides, the club also has a sub-group that sometimes leaves later in the morning, around 9:30, plus occasional out-of-state rides, charity rides and group trips. Last May, some of the members and their wives spent two weeks in Bellagio, Italy, sampling wine, shopping and, of course, biking. They even chose a hotel on the route of the Giro d’Italia, Italy’s version of the Tour de France, so they could watch the race from their windows. 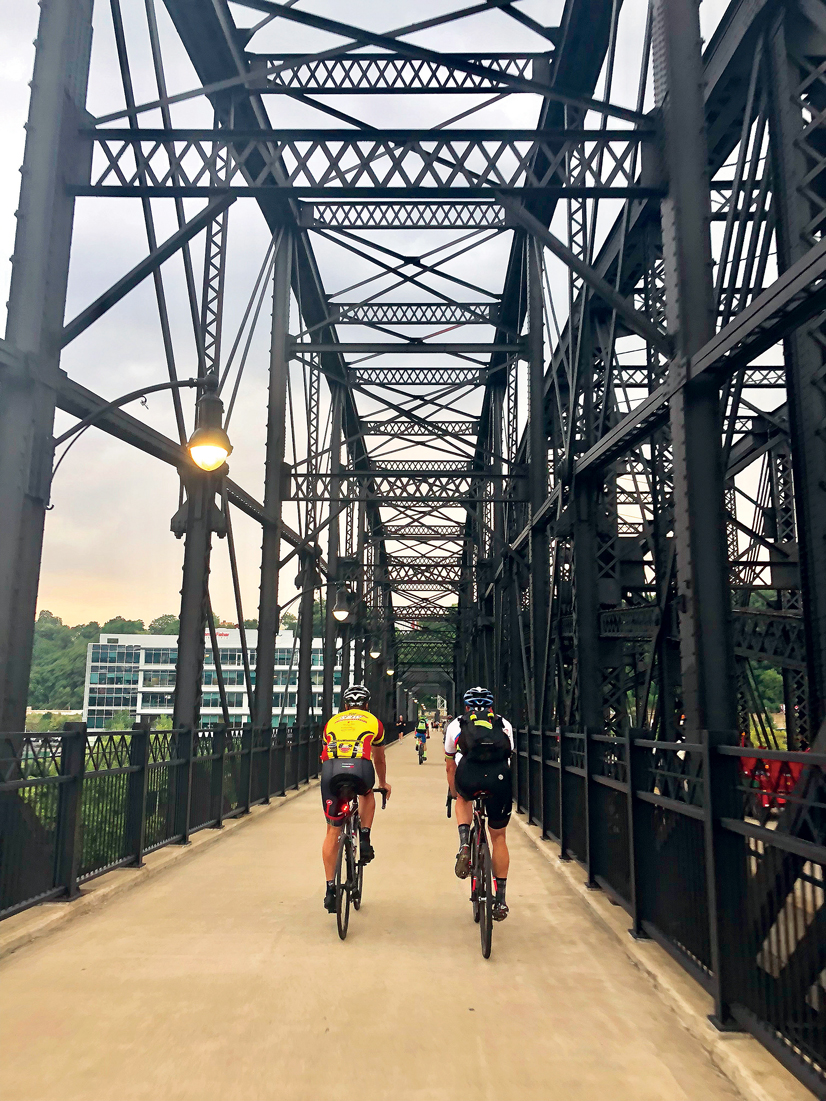 “We’ve done the TOSRV (Tour of the Scioto River Valley in Ohio),” Bodnar says. “That’s a group ride of thousands. It teaches you real fast how to ride in a group.” Since sharing the road and riding in groups is an essential skill.  Key factors include knowing when to yield right of way to cars, when to hold the lane and learning to be predictable. It’s also helpful if riders have a fitness average of 15 mph.

A club favorite is the Bike MS 150, a series of fund-raising rides in various locations around the country to raise money for multiple sclerosis research.  MtLCCC’s interest in Bike MS began when one of its members, Eric Obye, formerly of Lebanon Hills Drive, was diagnosed with multiple sclerosis in 1999. “He rode with us, even as he was fighting the disease,” says Bodnar, and when he did eventually have to stop, he continued showing up  for coffee before the 7 a.m. ride. Obye died in 2011, and the club continues to raise money for multiple sclerosis in his memory. MtLCC has raised more than $100,000 for Bike MS since 2000.

“It’s that sense of community and camaraderie in the club, and in Pittsburgh in general, that made me want to move back here,” says Jill Bodnar, David’s daughter, who recently returned to Pittsburgh after spending 25 years in Seattle.

While the group’s motto, “Mostly old guys in tight pants,” might lead one to believe that the group is not for women, Jill says there is a history, albeit brief, of women riders in the group. “There is always one woman who rides regularly—right now that’s me,” she says. “Overall, there are a lot fewer women who ride here in Pittsburgh, but we do have some fantastic women riders.”

One of the main challenges of riding in Pittsburgh, compared to other cities, is the hilly terrain. For that reason, many club members use E-Bikes, or electric-assist bikes, to help with some of the more difficult stretches—particularly on the Saturday ride around Mt. Washington, and close to home in Mt. Lebanon.

“Did you know you can take your bike on the light rail?,” Jill says.  “So you can ride your bike to the T from anywhere in Mt. Lebanon, ride it to downtown, and then bike to your destination. It makes Mt. Lebanon a prime location. It’s very European!” She is just one of the MtLCCC members who bikes as part of  their daily commute. The group consists of bike enthusiasts, commuters, racers and marathoners.

“One guy in our group did one million feet of climb last year,” says David. “He did 14,000 miles. I’m an old slacker, so I just did 8,000.” He emphasizes that the club is for all cyclists. “Get a road bike. Get a helmet. Get clipless pedals, and join us on a Saturday. Saturday is a bit more of a relaxed ride than Sunday. It’s not a bad idea to email us, though you can just show up, sure. But the ride leaves on time.”