t. Lebanon is ahead of most towns when it comes to managing stormwater. In 2011, we were one of the first municipalities in the state to institute a stormwater fee, which feeds into our stormwater fund. Since 2012, that fund has pumped more than $10 million into storm sewer projects, including repairs and improvements to existing storm sewers, storm sewer extensions, and reconstruction of curbs, which direct the flow of stormwater from driveways and roof drains into street inlets and stormwater pipes that flow into streams. All property owners, including such nonprofits as schools, pay this fee. The dedicated stormwater fund, in turn, eases the strain on the municipality’s operating budget. 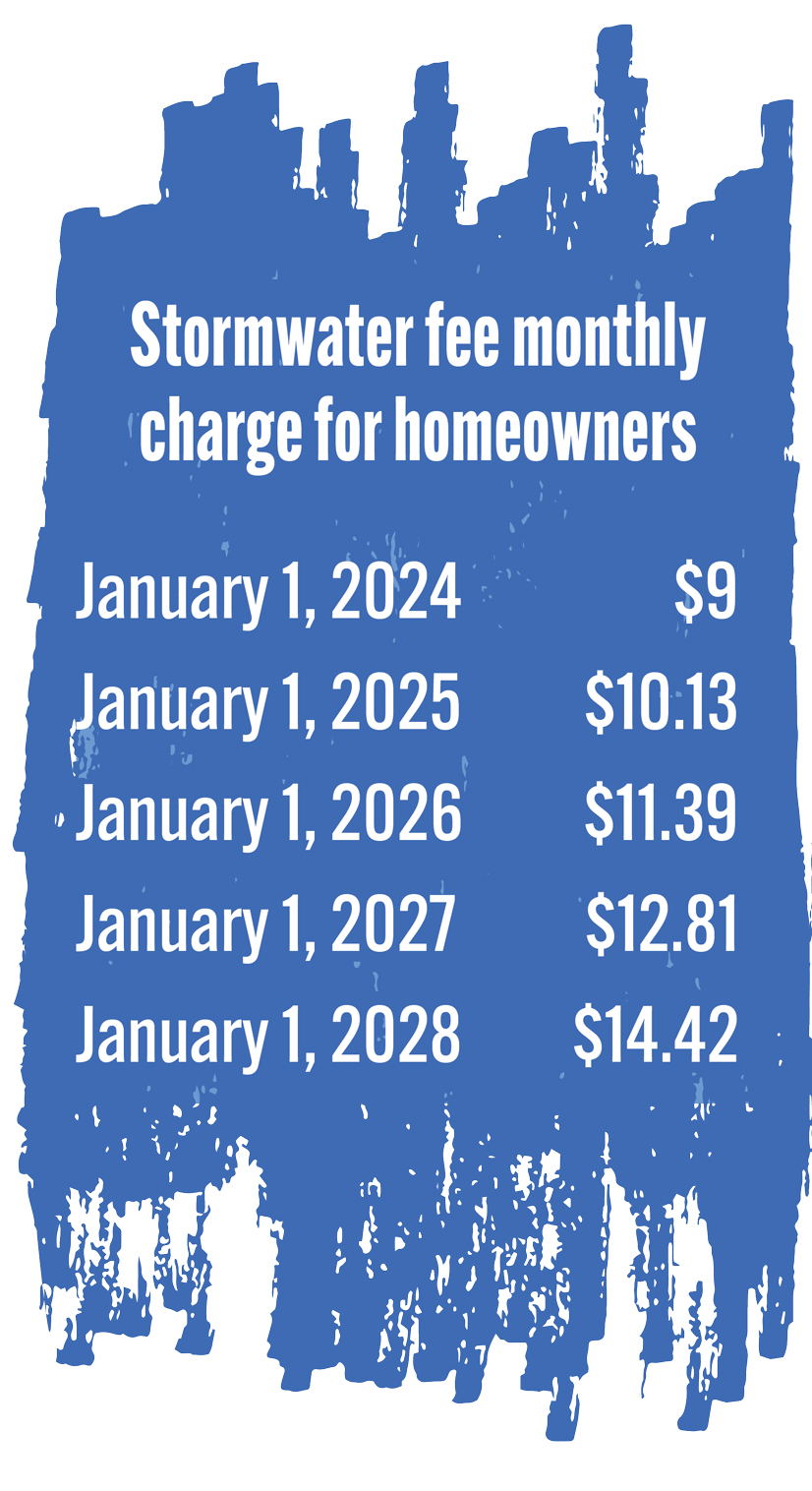 The 2011 stormwater fee was $8 per month per single family home, which covered most single-family homes. Multifamily housing and commercial properties, which make up about 29 percent of Mt. Lebanon’s impervious area, are charged based on the amount of impervious surface coverage the property has. Tax-exempt properties are also assessed a fee. Mt. Lebanon School District paid $52,608 last year, and the municipality paid $30,912.

Rising costs have taken a toll on the fund, which has been running at a deficit, making it necessary to make up the shortfall from the general fund. That shortfall has been between $300,000 and $600,000 annually, including $330,000 last year and $329,000 this year to eliminate ice spots on streets.

To ensure the fund continues such work, the Commission voted to increase the stormwater fee beginning in 2024.  Starting in 2024, the $8 fee will increase 12.5 percent per year for the first five years, after which it will be adjusted in accordance with the Consumer Price Index.

The infrastruture repairs are a result of a consent decree that Allegheny County entered into with the U.S. Environmental Protection Agency (EPA). In 2003, Mt. Lebanon was one of the 83 Allegheny County Sanitary Authority (ALCOSAN) communities that entered into a voluntary agreement with the Pennsylvania Department of Environmental Protection to monitor flow of stormwater and to keep it out of the sanitary sewer, where it can cause the sewage to overflow and end up in the rivers. Those rivers are where we get our drinking water.

ALCOSAN and the EPA entered into the consent decree in 2008, which required the authority to come up with a multiyear strategy to upgrade its sewer systems. This decree also required ALCOSAN to pay a $1.2 million fine for violating the federal Clean Water Act, and to spend $3 million on related environmental projects that would help to accomplish the goal. The decree had an end date of 2026.

About 14 percent of Mt. Lebanon’s surface area is impervious—streets, driveways, patios, parking lots, swimming pools and other structures that don’t absorb rain or snowmelt the way uncovered natural surfaces do. The excess water runs off into storm sewers, overloading the antiquated system and often causing flooding and carrying litter and other forms of pollution into streams and rivers.

And there’s another problem. Our sanitary sewers carry wastewater from homes and businesses to a wastewater treatment plant where it is filtered, treated and discharged. In a perfect world, that system should be sealed to lock out water or chemicals from entering. But with our aging system, many pipes, including the lines carrying sewage from our homes to the street sewer, are cracked, allowing stormwater to infiltrate.

Mt. Lebanon is responsible for about 160 miles of sanitary sewer pipes. Storm sewers are networks of pipes and catchbasins that collect runoff from rainstorms and channel it untreated into streams and rivers. Mt. Lebanon has 75 miles of storm sewer lines and more than 3,000 catchbasins that feed the storm system.

Another requirement of the mandated decree is that Mt. Lebanon must have a Municipal Separate Storm Sewer (MS4) permit, a federal permit required for the discharge of municipal storm sewers. Conditions of the permit include implementing pollution control measures and a closed-circuit TV survey of all municipal sewer pipes to show their connectivity and document their condition.

As it became clear that ALCOSAN wasn’t able to meet the 2026 deadline, last year it negotiated a second consent decree, delaying for 10 years the first phase of the project, which would eliminate seven billion gallons of sewage overflow a year, at a cost of $2 billion.

Finance director Andrew McCreery estimates that funding needed for stormwater infrastructure improvements for upcoming projects is about $2 million a year, but the current stormwater fund brings in only about $1.45 million.

“There are some projects that come up year after year, along with other projects that are just the result of normal wear and tear on the infrastructure,” said McCreery.

“We’re making adequate progress, and we’re not deferring anything critical, but we need to get (stormwater improvements) out of the general fund, as prudent and fiscally responsible as we can,” he said.

McCreery says the idea of increasing the fee has been under discussion for the past five years.

“We knew it was time to re-examine the fund,” he said. In 2022 the Commission also amended the original ordinance to eliminate its “sunset” date of 2031.

“There is no longer an automatic termination,” said McCreery, although future Commissions will have the option to reinstate an end date.