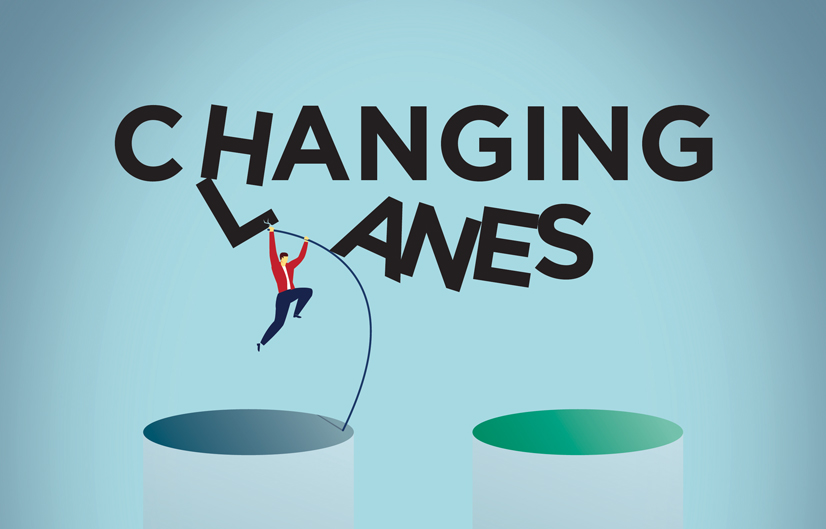 The equation of the words “crisis” and “opportunity” in both Chinese and Japanese characters has been disputed by some native speakers, but it’s a notion that resonates. Perhaps the coronavirus crisis has given some of us an opportunity to look hard at our lives and work, and consider some changes.

It can be done; four of our neighbors have made the leap from one career to another, and they’ve all landed on their feet. But the backstories are as different as the professions they chose. 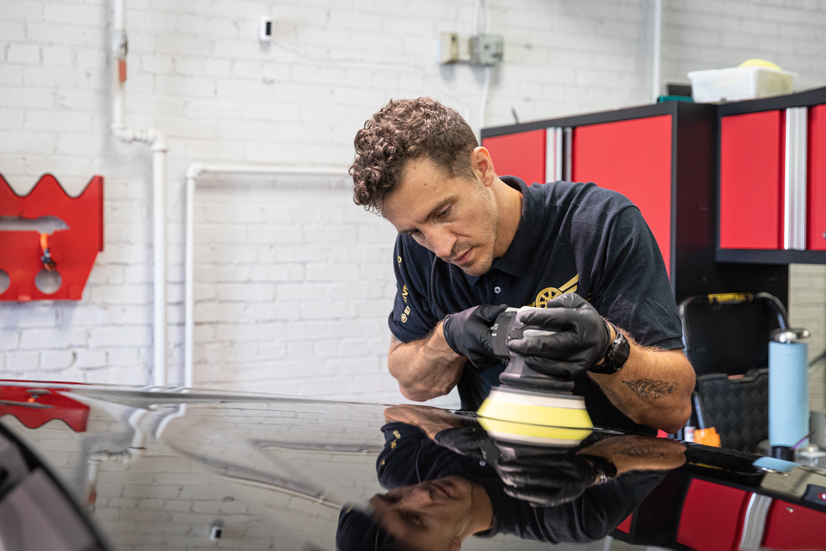 Shortly after graduating from Peters Township High School in 2001, Dante Prinzo started selling cars at John Sisson Motors. He felt self-conscious about not going to college, and the job “made me feel better about myself.” He liked cars, and he enjoyed interacting with customers, but the sales aspect, not so much.
Prinzo moved on to a career as an executive recruiter, first in Pittsburgh, then in North Carolina, where he moved in 2011. There he managed a small executive search firm that specialized in placing life scientists “in jobs I didn’t understand,” he readily admits.

He still liked cars. He started importing Japanese cars, initially as a hobby. Quirky models from the early 1990s, like the Nissan Cedric and Toyota Chaser, never sold in the United States, and were popular with collectors. Prinzo scouted for the cars online, working with a consultant in Japan, and shepherded them through customs.

Along with the import business, Prinzo started offering car detailing services. By 2018, he was working with cars full time. He, his wife Kristen, and kids Baeden, age 7, and Jeea, 4, came back to Pittsburgh and settled in Mt. Lebanon, on Serpentine Drive, last June. Two months later, Prinzo opened his garage, Elusive Auto Company, off Cedar Boulevard, behind PNC Bank.

The business is doing well, but Prinzo is candid about the challenges career-changers face.

“If my wife didn’t work, I’d still be recruiting,” he notes. And he offers advice for those considering a move: “People tend to see the 10 percent of the job that’s fun, and not the 90 percent that’s a hassle,” he says. “If you want to do something because it’s your passion, don’t do it unless you’re good at it, too.”

For Linda Hackett, photography was a well-loved childhood hobby she shared with her father. But after graduating from Duquesne University law school, she moved on to a successful career as an attorney, at Thorp Reed & Armstrong and other downtown firms. But by 2014, Hackett was ready for a change.

“I had spent 22 years as an attorney. I loved it,” she says. But as her two children, son Jack, a 2020 Mt. Lebanon High School graduate, and daughter Reese, now 14, grew, she adds, “I wanted to be the one having those difficult conversations with them.”

She retired from law, but “I’m the type of person who can’t sit still for long,” she says. Her husband, Tim Sullivan, gave her a digital camera in 2006, but “I refused to use it. I missed the anticipation of developing film.”

However, as she took to YouTube and learned more about digital photography, Hackett became excited by its possibilities. She began taking shots of her son’s football and lacrosse games and her daughter’s ballet recitals. She branched out into food photography; La Gourmandine was her first client.

Hackett also does family photography and senior class pictures. “I like to get to know my clients and do something special for them. I don’t want to take the traditional senior photo.”

Her work can be seen on Instagram, at Olivia Bean Photography and Ballerinas of Pittsburgh, a “passion project” that showcases dancers photographed in locations around the city. She also has done work for Mt. Lebanon Magazine.

Hackett keeps her law license current—“I always tell my kids, you want to have options”—but she doesn’t miss practicing law. “I am that mom that tells my kids they have no limits. Figure out what you love to do and do it.” 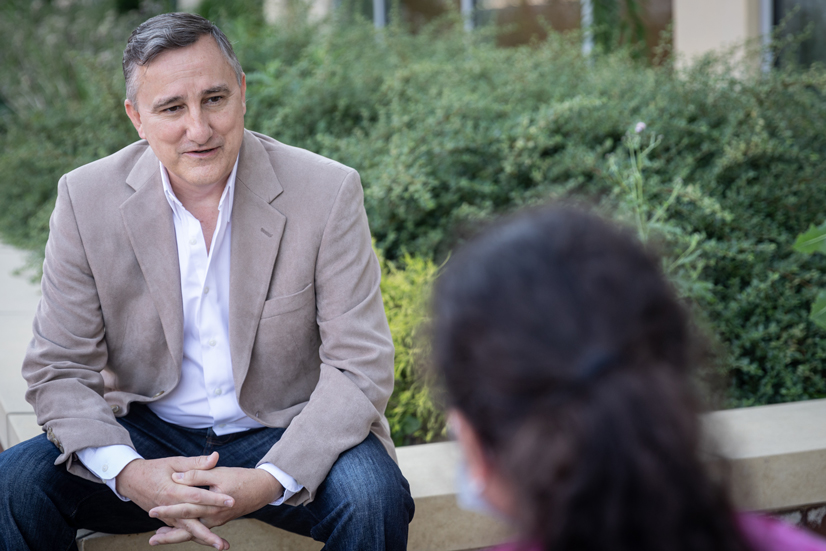 Back to crisis and opportunity: For John Duffy, a personal crossroads led to a professional one.
Duffy had been a successful sales representative for Johnson & Johnson and other pharmaceutical corporations, but the profession had changed over the years.

“I used to love walking into doctors’ office and dealing with the people,” he says. “Then it became very competitive. It was difficult to talk to the people you needed to talk to.”

Fourteen years into his career, with two teenage daughters and an impending divorce, Duffy was led to re-evaluate his life. While continuing to work full time as a sales rep, he earned a master’s degree in counseling psychology from Chatham University. He immediately entered a doctoral program in counseling at Duquesne University and received his degree in 2006.

“I was motivated, and it was something I enjoyed doing,” he says.

As a therapist, Duffy now sees clients in an office in the Executive Building on Washington Road (and online during the COVID-19 lockdown). He works with teenagers and adults. “If my clients are going through pain, I embrace it. I’m engaged with them.

“I have not regretted it for a second,” Duffy says of his career switch. “If you love what you’re doing, everything else takes care of itself.” 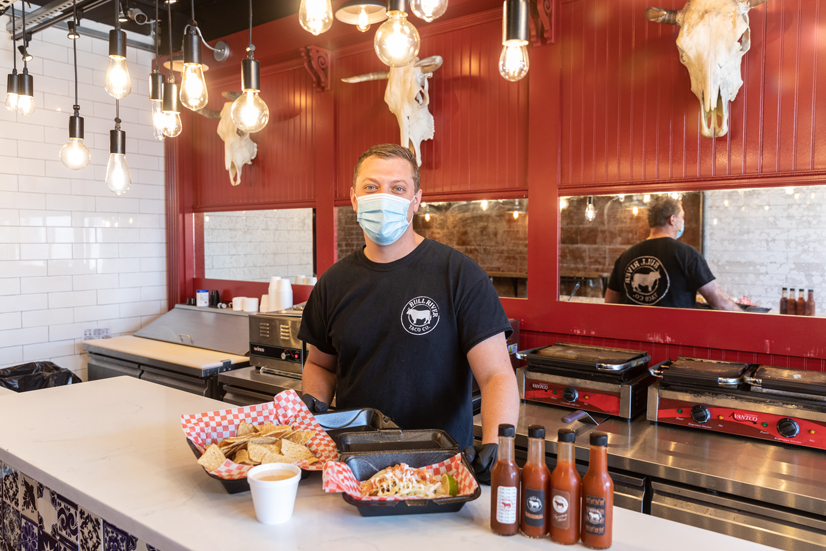 John Frankovitch didn’t get too far into his first career before he knew he wanted a change.

He graduated from Washington & Jefferson College with an accounting degree in 2018. He started work Downtown, at Pricewaterhousecoopers, almost immediately, and quickly realized that life in a cubicle wasn’t for him.

“It was driving me a little crazy,” he says. His family has a farm near Weirton, West Virginia, where he grew up, and “I was used to doing things all day there.”

His brother, Mike, had opened Bull River Taco Company in Squirrel Hill and on Route 51 near Baldwin High School. Mike was considering a third location, and in August 2019, John left accounting to set up a Mt. Lebanon franchise.

The COVID-19 lockdown in March “caught me off guard,” John says, but he’s built an enthusiastic clientele for his smoked meat and vegetarian tacos and nachos.

“People have been great,” John says. “Mt. Lebanon customers have been awesome.”

And as it turns out, his accounting degree has come in handy: “I can do my own books.”
John says he’s glad he found out early that a career switch was called for: “I didn’t have many other things holding me back.”