We’ve all heard it said or read it somewhere, “it’s not about the destination, it’s about the journey.” Well, as it turns out, on my recent trip to Bhutan, both were true.

Bhutan is a small country in south Asia, nestled deep in the eastern Himalayas, bordered by China on the south and by India on the north, west and east. It is approximately the size of Rhode Island with a population of less than 700,000. It is one of the few places left on earth that even the most seasoned travelers consider a privilege to visit, although very few make it.

As remote as the country is itself, still there are more remote places within. Chorten Nebu monastery is one of those places. Chorten Nebu translates to The Old Temple. This eighteenth century monastery is perched on the top of a hill overlooking the Punakha Valley. The story the Bhutanese tell is that this magical spot was once a dense forest inhabited by evil spirits.

One day, when all the demons were assembled together, the Divine Madman, Drupka Kunley appeared. Legend has it that he hurled a burning log into the assembly and all the evil spirits were scorched to death. The giant oak tree that still stands outside the monastery is said to have grown out of the burning log that the Divine Madman threw.

In 2005, Chorten Nebu began housing poor orphans from nearby villages while at the same time starting a small Buddhist school for them. There, these boys, affectionately called monkettes, receive traditional monastic training while also studying Western subjects such as English, math and science. 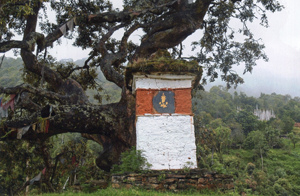 This past September I visited Chorten Nebu while spending a week trekking through Bhutan. There were 16 of us. We found ourselves together, for the first time, in Bhutan, a group of enthusiastic, curious seekers who had come from around the world, to explore this far-off, exotic land.

We left our hotel and shuttled to the village of Sirigang where we began our climb. The two-hour trek up was slightly less than five miles with an elevation gain of about 1,400 feet.

Along the way we engaged with locals going about their daily business of living; we walked alongside young children outside playing, we observed a village elder spinning a prayer wheel in his left hand, while simultaneously and reflexively moving the fingers on his right hand from one worn-out wooden bead to the next, along the strand of his Japa Mala prayer beads. And, we were overtaken, on those same muddy slopes, by women carrying 50-pound sacks of rice on their backs. 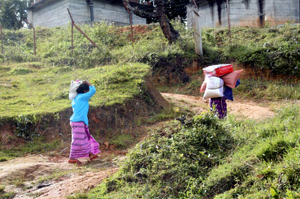 As we reached the top of the hill and entered through the gate, I first glimpsed the magnificent structure that is Chorten Nebu, and then as I continued along I could begin to see a scattering of monks in their maroon robes dotting the grass in the courtyard. This was a place so sacred, so remote, and so inconceivable that it felt like discovering something that couldn’t possibly still exist in this day and age.

The monkettes graciously welcomed us with smiles which at once convinced us that it didn’t matter that we didn’t speak Dzongkha and they didn’t speak English. We gathered in the courtyard where they served us tea and biscuits, as we sat, surrounded by centuries-old structures and a view of that giant oak tree. 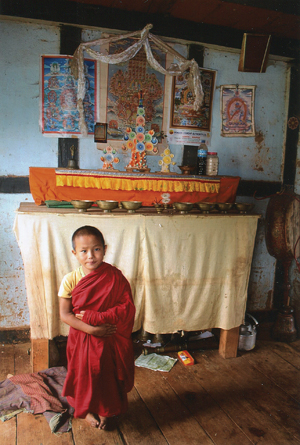 Next we visited the building that houses both the dormitory and the classroom. There were beds in the dormitories, thanks to the generosity of the Central Monk body and visiting guests who see the value in giving back to Bhutan. There were no desks in the classroom; however, there was a small altar to allow for the daily rituals associated with Buddhism. There were seven water bowls positioned on the altar. It is customary that devotees place seven bowls filled with water on the altar daily; this simple offering is important, especially here, in this place, because it can be given without greed or attachment.

Throughout our visit we interacted with the monkettes who generously shared smiles and hugs. They enjoyed posing for photographs, but took greater pleasure in seeing themselves in the images that immediately appeared on our digital camera screens.

As we concluded our visit to Chorten Nebu that afternoon, I left feeling a bit sad, because for me, the end of anything is always at least a little bit sad; but I also felt hopeful, convinced that these young boys were being well prepared with what they would need regardless of the destination their path would lead them to. And again, I was reminded of the importance of the journey, believing, that these young boys, without knowing it, are on a journey so extraordinary, so unique, a journey, that in these modern times, few people will ever go on.

I left, also knowing that it had been a privilege to have been there, a place I know very few others will get to, a place I will continue to return to often in my thoughts, and if I’m doubly blessed will have the opportunity to visit again.