You see them around Mt. Lebanon. They’re the ones turning heads, pricking ears and making people smile.

They’re classic cars. And their owners put some of their cars on display at the Mt. Lebanon Classic Car Show and Street Festival  on July 6 at the 700 Block of Washington Road.

Some of the cars featured this year include classic Mustangs, a 1948 Singer 9 Roadster, a 1970 Dodge Charger and a 1993 Corvette. The show usually displays 120 to 150 cars each years, says Mt. Lebanon Police Corporal James Hughes, the event’s organizer.

We interviewed three local car enthusiasts to hear their stories—why they chose the car, what makes it special and how people react when they see it gunning down the street. 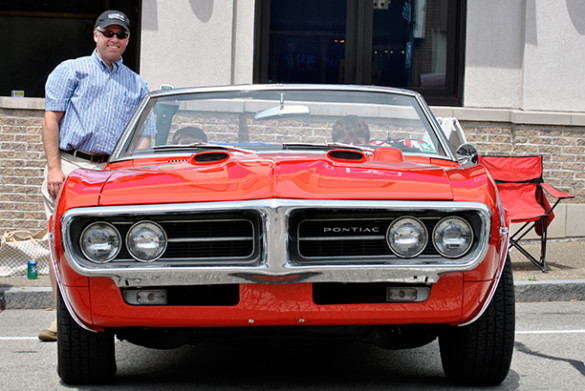 David Levine was stumped. He always left his keys in his Pontiac Firebird. He took 10 minutes looking around the house, throughout the vehicle, in his pockets and in his other car until he came across them.

Relieved by the discovery, he revved the engine in his garage in Mt. Lebanon. The roar of the muscle car reverberated and could be heard as far away as two houses down the block.

The car reflects the man, as they were both created in 1967.

“As time goes by, I like to think which one of us is aging better,” he says with a smile. “I think it’s neck and neck now.”

It was an important year. Jimi Hendrix played Monterey, and the Green Bay Packers beat the Kansas City Chiefs 35-10 in the first Super Bowl. Yet the introduction of the Firebird was one of the most significant events.

As he drove around Mt. Lebanon, he passed a youth baseball game. The stands were full of parents, grandparents and players’ friends and siblings.

He shifted into neutral and pushed the accelerator to give a loud roar. All the men and boys turned their heads. Most of the women did not acknowledge.

“I call it the Chuck magnet instead of a chick magnet,” Levine says. “Because it attracts men’s attention, but women don’t seem to care.”

The 1967 Pontiac Firebird was featured on television in April, when an episode of the Discovery Channel’s “Fast N’ Loud” showed a restoration of the first two Firebirds ever built. The pair sold for $650,000. Host Richard Rawlings called the Firebird the “Holy Grail of muscle cars.”

Levine bought the car 12 years ago around the time his children were born. When his kids were young, the family of four would pack into the car and take off for a convertible ride to the ice cream parlor. It was a picture of the American dream.

“One of the most vivid memories I ever had in the car was when we drove all the way down to Schenley Park,” says his 14-year-old son Ben. “Immediately after, we got ice cream at Rita’s. I remember my sister slammed her ice cream cone in my father’s face when he tried to take a bite. The car brings our family together. It’s nice to have around.”

On his way back to his home, at each stop sign, drivers looked at the bright red beauty. Their reactions are what make it special to Levine.

“It makes people smile,” he says. “There is also the occasional time you can take off…that’s fun too.”

Staying off the Streets by Driving on Them 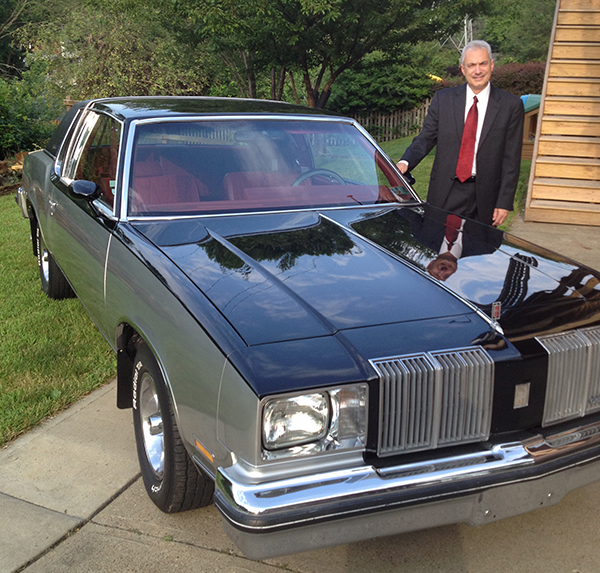 District Judge Blaise Larotonda walked around his 1979 Oldsmobile Cutlass Supreme, which sat at the top level parking lot of The Galleria.

Though it isn’t flashy, it still caught the attention of people passing by.

“It’s not considered a show car,” Larotonda says. “But people are like, ‘I had one of those back in the day.’”

It came out when Pittsburgh earned its title as the City of Champions. The Steelers beat the Cowboys 35-31 to take the Lombardi Trophy, and the Pirates beat the Orioles in seven in the Series. Best Picture that year was The Deer Hunter, a movie starring Robert De Niro that showed Vietnam veterans readjusting to life in Western Pennsylvania.

It’s a time Larotonda, 58, is nostalgic for. He was just starting out as a Mt. Lebanon police officer. And he drove a Cutlass Supreme. He sold the car in 1985 because he and his wife, Dorothy Larotonda, thought it wasn’t a good family car. He bought the same model car in 2009.

“It reminds me of when we first got married,” Dorothy says. “It wasn’t the exact car, but it was the same model. It broke down late one time, and we ended up getting rid of it then because it didn’t seem reliable. He says he would drive anywhere in the country to find it again. He liked it.”

Larotonda turns the ignition and rolls out of the parking lot toward the high school. The car floats. Potholes, bumps, every other road annoyance? Barely there.

Both of Larotonda’s kids are in the service. His daughter is in the Navy and his son is in the Army. He needed something to keep his mind off the trouble and danger they could have been in. So he bought the car to work on.

“It keeps me busy…the small stuff,” he says. “Things often go wrong with it. And I’m always thinking of how to improve it. “

He plans on installing a five-speed manual transmission next winter.

The judge and former cop knows how easily people can slip into trouble if they have idle hands.

“It keeps me off the streets,” he says with a smile. 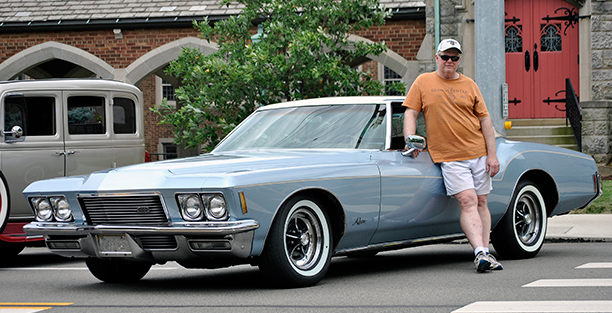 Jim Duffy twisted the key to get the Buick Riviera started. The battery had been charging his classic blue car’s battery for a while.

At first it wouldn’t go.

“Gian,” he says to his son. “Flip that button to the other one.”

After his son did as he asked, Duffy turned the key and the engine roared to life.

The car is long. So long it doesn’t fit into most garages. Duffy bought his current house in Mt. Lebanon because he needed a garage long enough for the car to fit into. The one he has can do so, but just barely.

Duffy’s Riviera came out in 1971. All in the Family debuted on CBS that year, and changed the model for the American sitcom. In national matters, the U.S. Supreme Court ruled unanimously that busing of students could be ordered to achieve racial desegregation.

Duffy, 56, was 13 when the car first came out. When he was 16, he attempted to persuade his father to buy him a Riviera.

“I brought one home to my dad when I was a teenager,” Duffy says. “And I says, ‘Dad, you have to see this.’ And he took one look and says, ‘No. Too big. Gas guzzler.’ I’ve always wanted one ever since.”

Duffy drove around Mt. Lebanon with Ray-Ban sunglasses and a sleeveless T-shirt. His wavy white hair blew as the wind came in through the window. The car stood out among the ones driving beside and past it.

“I always get a comment on it,” Duffy says. “Guys saw this growing up, or knew a guy who had one.”

The car has some defining features. Its boat-tail is perhaps the most noteworthy one. Duffy’s model does not have a side mirror on the passenger side. It was an option for the car at the time.

Duffy headed to his home after a 15-minute drive around Mt. Lebanon. He reflected on how most classic car owners feel about their car and, in turn, their youth.

“Everyone I know who has a car like this wishes they could take it back and have it when they were young.”