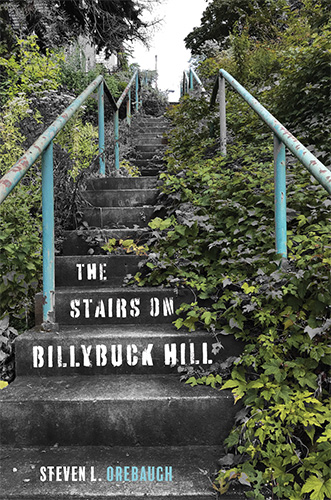 Dr. Kurt McCain is a young physician and opioid addict who finds himself at the lowest point of his life in a sordid tale of infatuation, temptation and intoxication.

In this particular case, it’s a fictional story, but the scenario could be very real.

McCain is the main character in The Stairs on Billy Buck Hill, the latest novel from anesthesiologist and author Dr. Steven Orebaugh, Flintridge Drive. “It’s a cautionary tale.”

Orebaugh is an academic anesthesiologist who specializes in regional anesthesia, the use of local anesthetic injections to help control pain after surgery, thereby reducing the use of opioid drugs. He’s been with University of Pittsburgh Medical Center for 25 years and also worked as an
emergency physician.

Over the years, a half dozen people Orebaugh knew became addicted to opioids. “They just disappeared one day. We found out through the grapevine so-and-so was found diverting drugs and now they’re not employed anymore,” he said. “So, basically, not denying it to patients, but falsifying the amount; some for me, some for you. That’s what goes on in the book.”

Once Orebaugh saw this happening to a number of colleagues, he felt maybe there was something he could do to make people more aware of the problem. That was the idea behind The Stairs on Billy
Buck Hill.

“This was my attempt to create a little more public awareness,” he said.

According to the U.S. Department of Health and Human Services, 1.27 million Americans are now receiving medication-assisted treatment for opioid addiction.

Research shows anesthesiology has a high potential for opioid addiction due in part to easy access to opioids.

“As an anesthesiologist, I deal with pain issues and people take opioids a lot, we dispense opioids a lot and we’re around them, so we’re exposed on a very frequent basis,” Orebaugh pointed out.

When he started writing the book six years ago, the opioid crisis wasn’t as topical as it is now. It’s only gotten worse. Overdose deaths continue, despite the current state of public awareness. According to government figures, two out of three drug overdose deaths in 2018 involved an opioid.

“It was a hard thing for me to write because I think some people would say that just doesn’t seem plausible. This is a guy who had everything in the world going for him. But he had a chink in his armor. He lost his girlfriend in a bad relationship and someone comes along who suddenly seemed to be everything he wanted,” Orebaugh said.

McCain’s habit started out being a relatively mild one that suddenly snowballed into an addiction. Orebaugh felt it was a relatively realistic way to portray how someone so sophisticated and knowledgeable can fall victim to these drugs; how the sudden use, then abuse eventually turns to addiction.

“This is a guy who’s very straitlaced and very knowledgeable about the pharmacology and the danger of these drugs and just didn’t want to do this, but he gets involved with a woman, who it turns out later was probably manipulating him the whole time to get the drugs,” he said.

The Stairs on Billy Buck Hill addresses what it’s like to lose it all and make the slow climb back to redemption. When the main character hits rock bottom, his profession is destroyed, his license is taken away, his closest relationships are compromised and he finds himself basically alone.

Why did Orebaugh decide to tackle this serious topic in a fictional way?

He has written nonfiction books in the past and found a novel gave him a greater chance to explore his creativity. “I know the profession, so it’s easy for me to write realistically about what we do day to day,” he pointed out.

The novel is very Pittsburgh-centric. The title refers to a hill on the South Side Slopes, and the stairs on the cover are a metaphor for the ups and downs of Dr. McCain’s life, as described in the book.

If the book is ever optioned by Hollywood, Orebaugh envisions the title character being played by Matt Damon.

In the meantime, he hopes his novel will help readers understand how someone as sophisticated and knowledgeable as Dr. McCain can fall victim to the sudden use, then abuse, then addiction of opioids that ends up ruining lives.

“If you know someone in your life with a similar problem, does this story inspire you to help them get help? That’s exactly what I’m hoping.”

The Stairs on Billy Buck Hill is available from Amazon or on Orebaugh’s website.