These days, girls in middle and high school are embracing computer technology in growing numbers. In Mt. Lebanon, they have a new place to come together to ride the tech wave into the future: The Coding Gals club.

The Coding Gals, which meets at Mt. Lebanon High School every Wednesday in a computer classroom, was started in 2014 by Mt. Lebanon parent Christine Tandon as a chapter of Girls Who Code, a national organization to promote coding for girls; the club renamed itself Coding Gals to reflect their self-directed, workshopping approach to coding.

This club and others like it herald a long-overdue shift: the increase in women heading toward careers in computer science and engineering, and information technology. 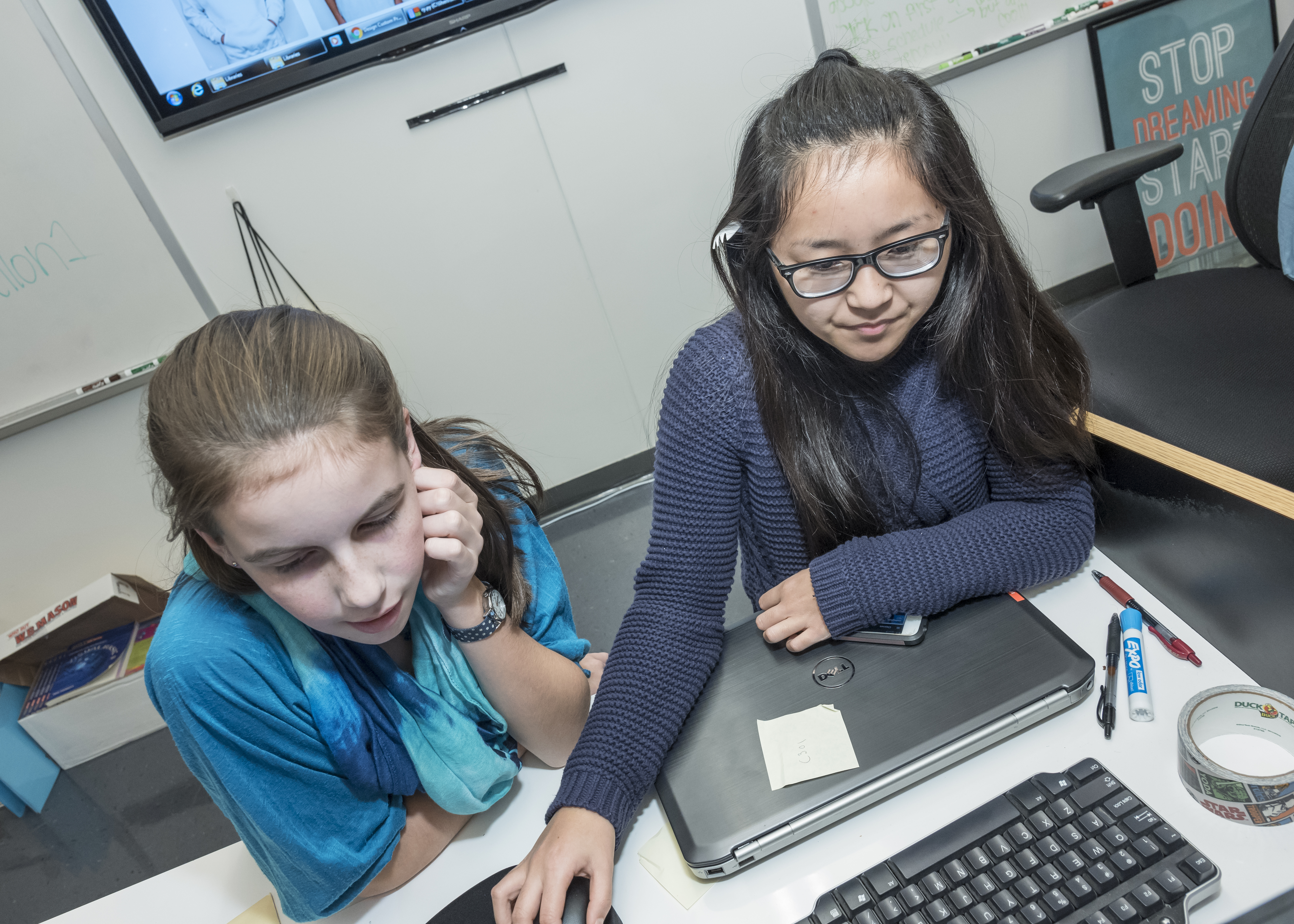 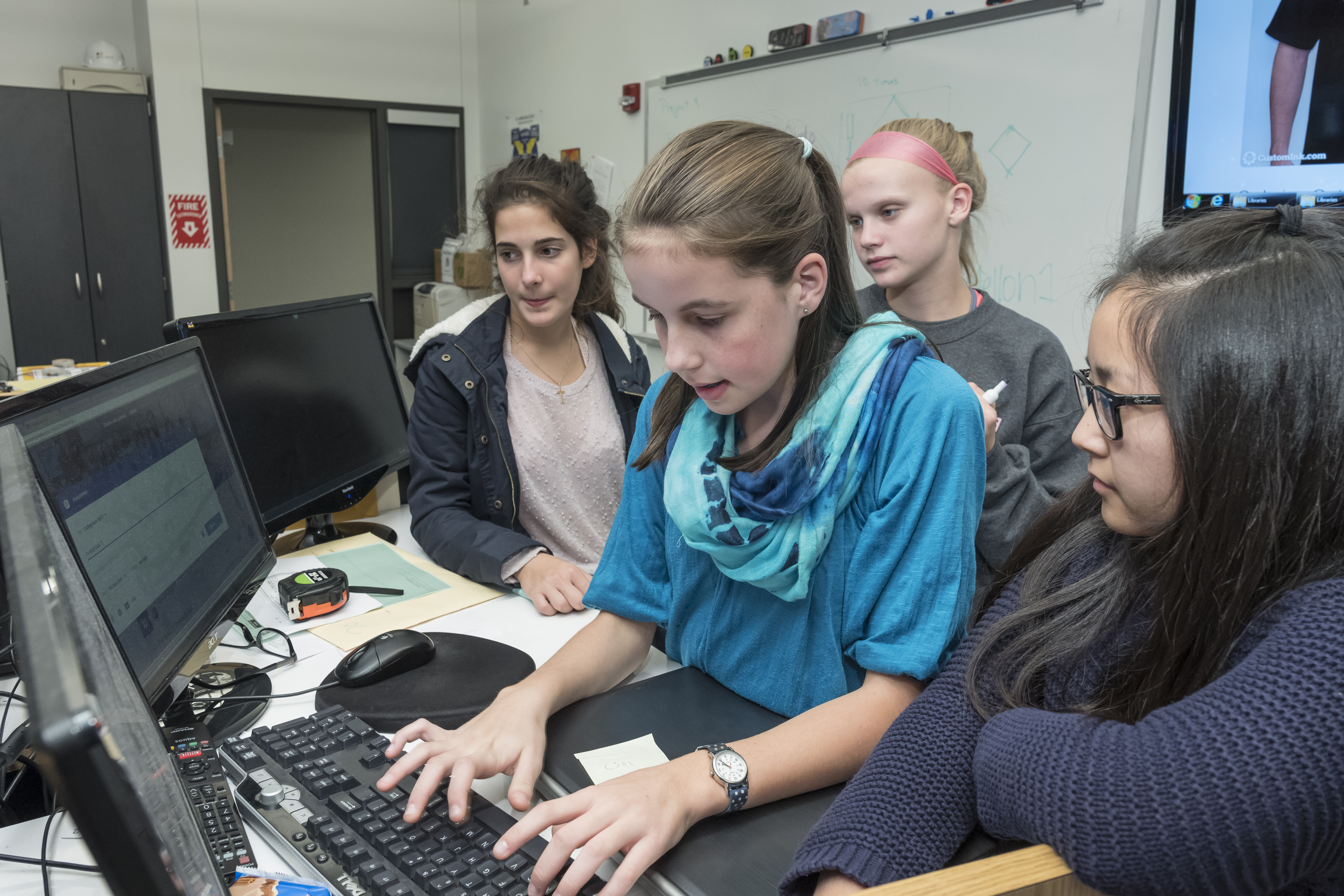 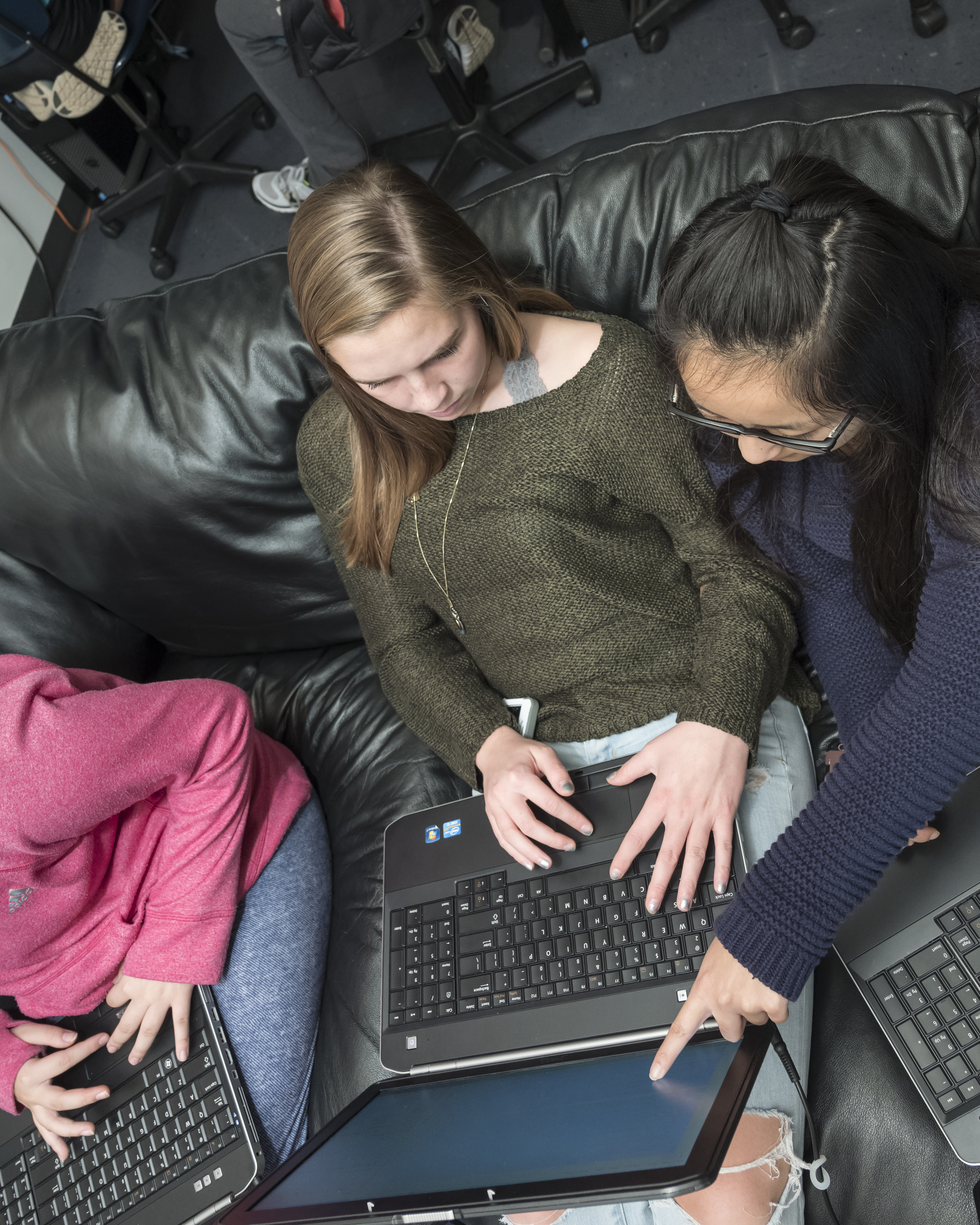 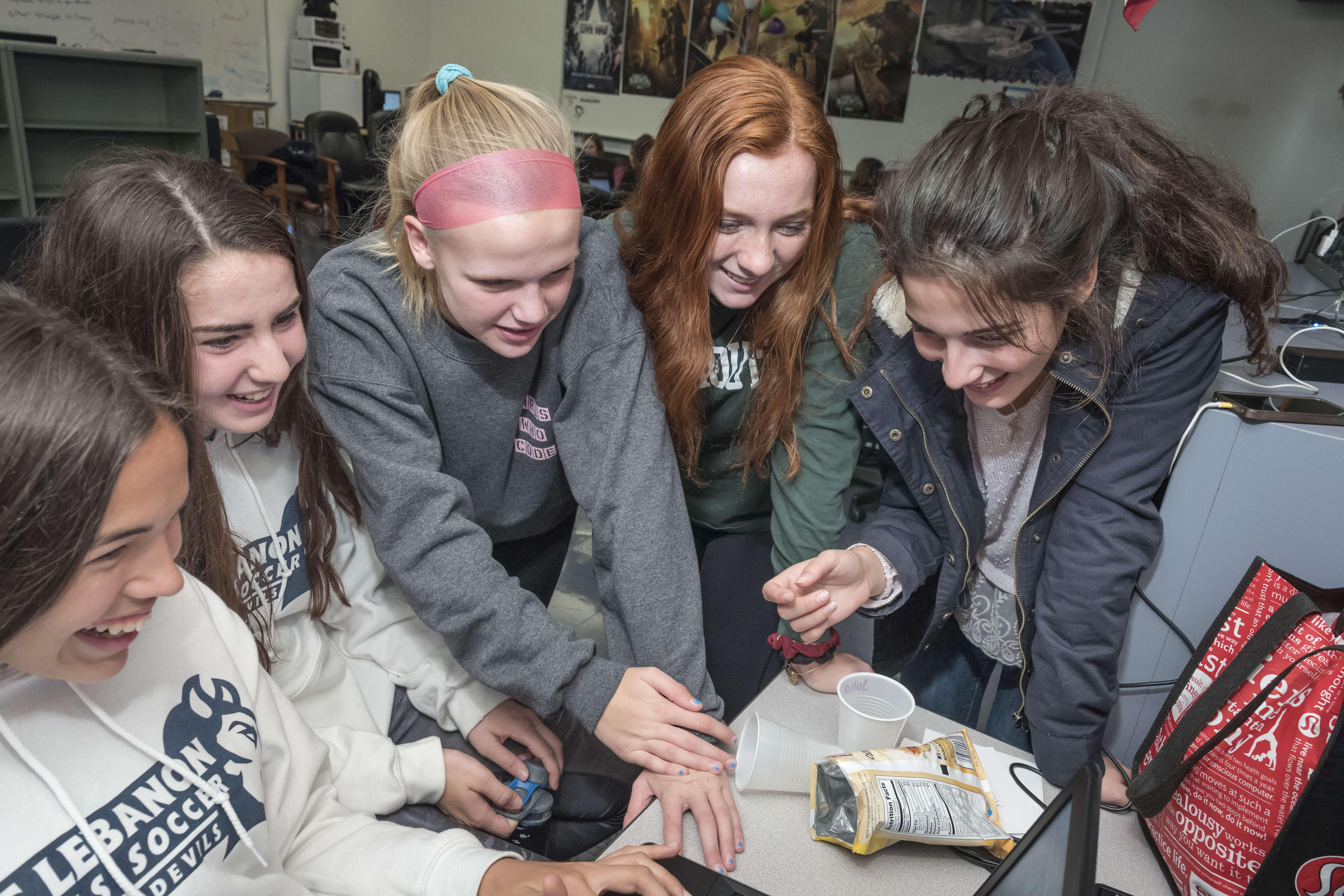 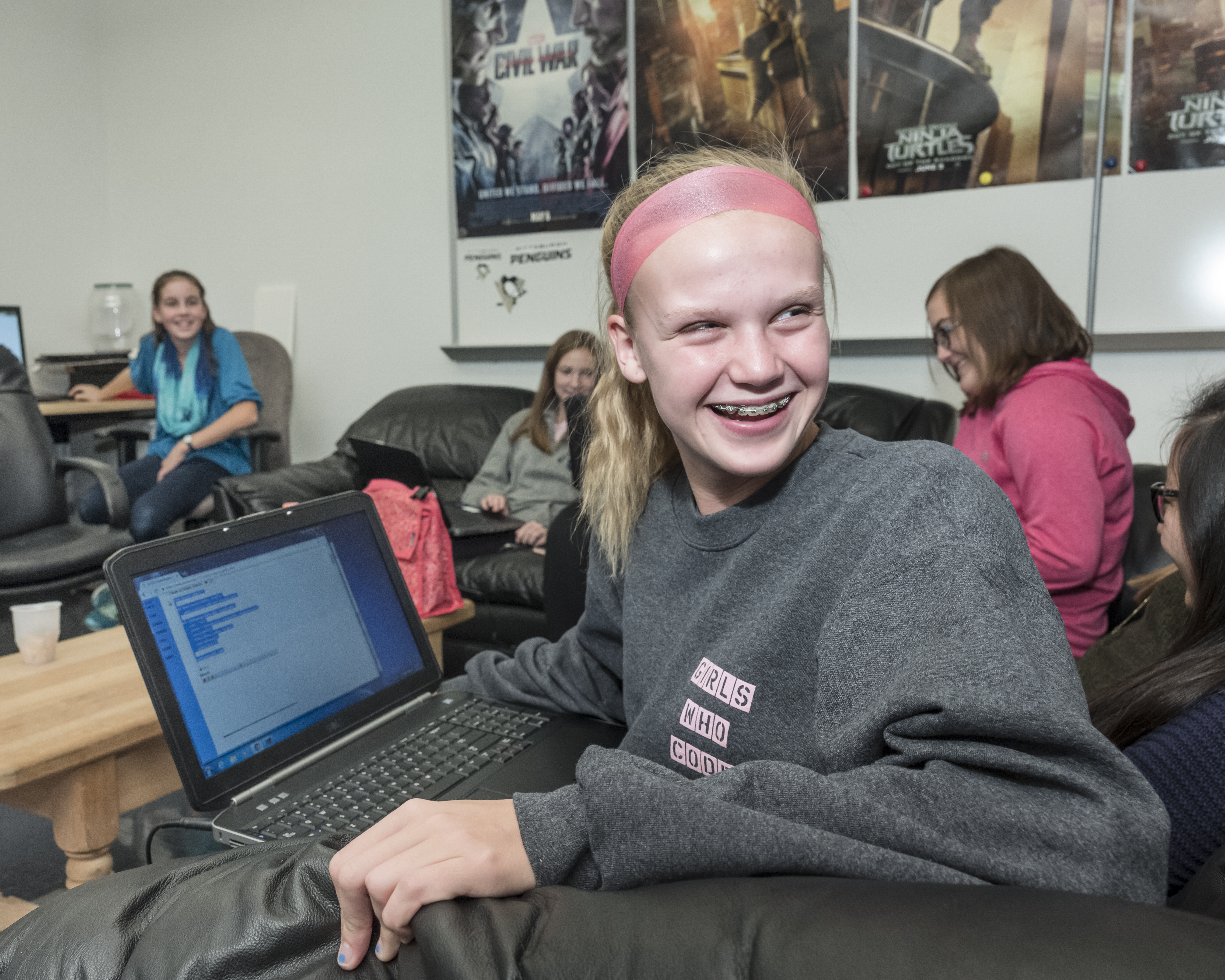 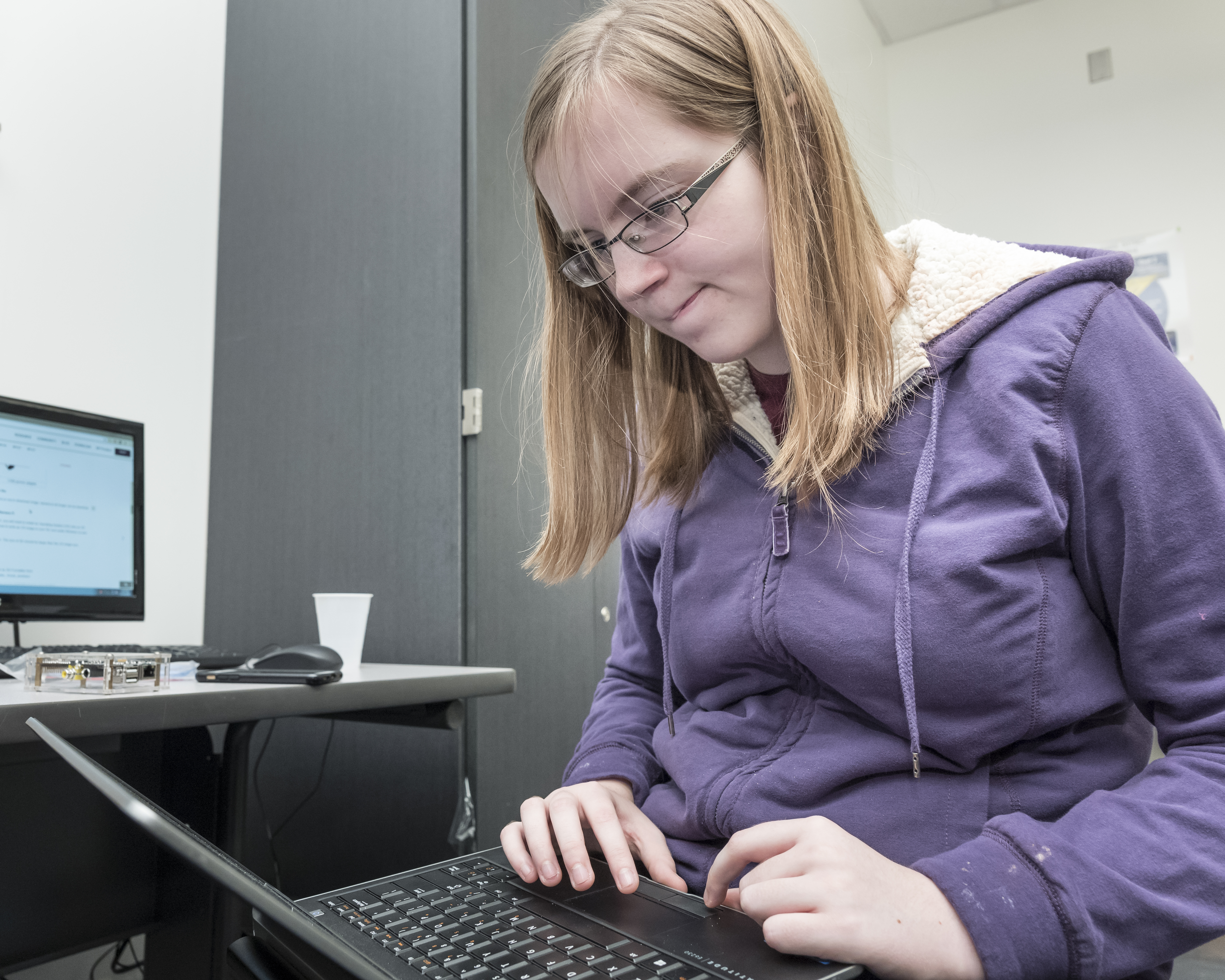 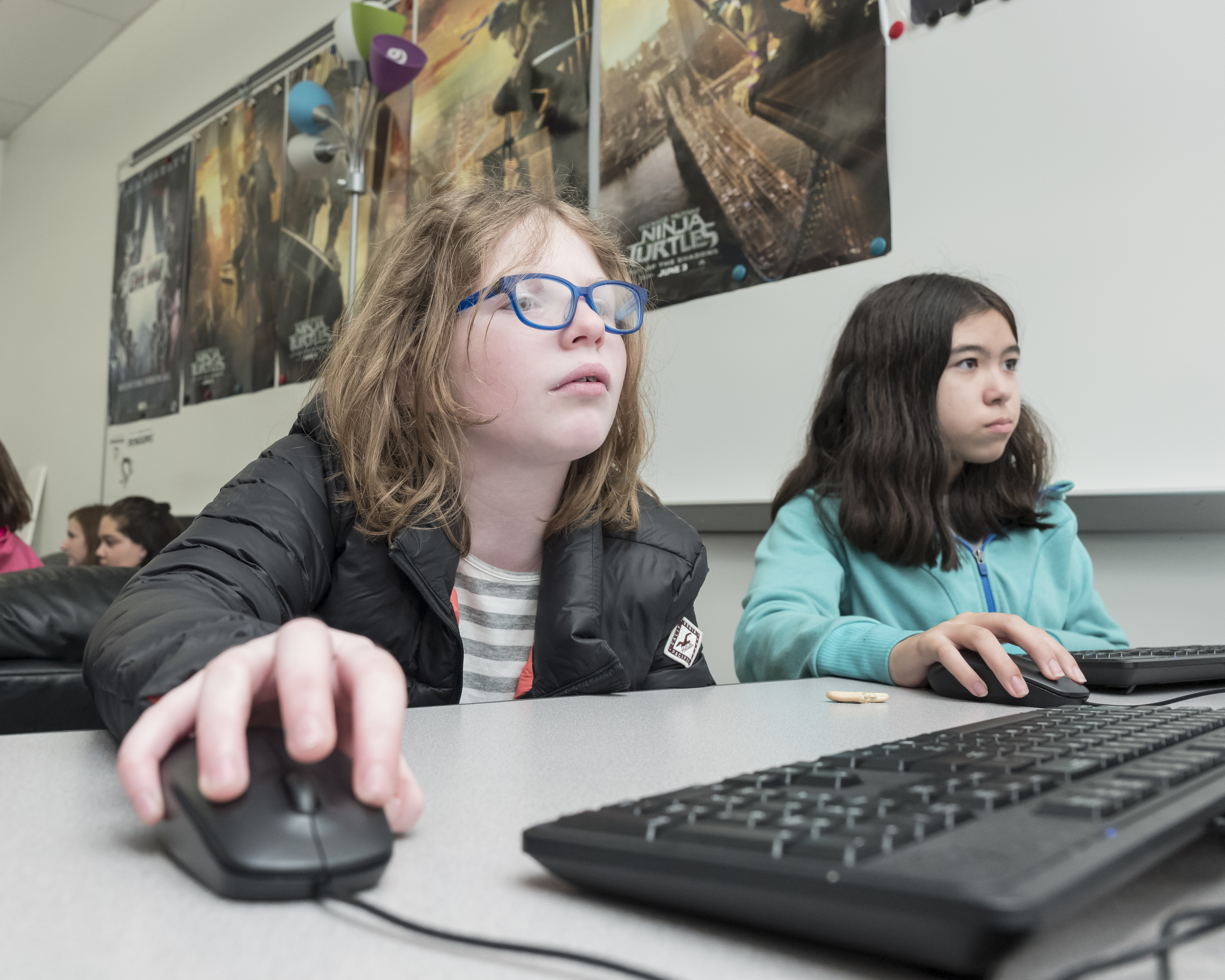 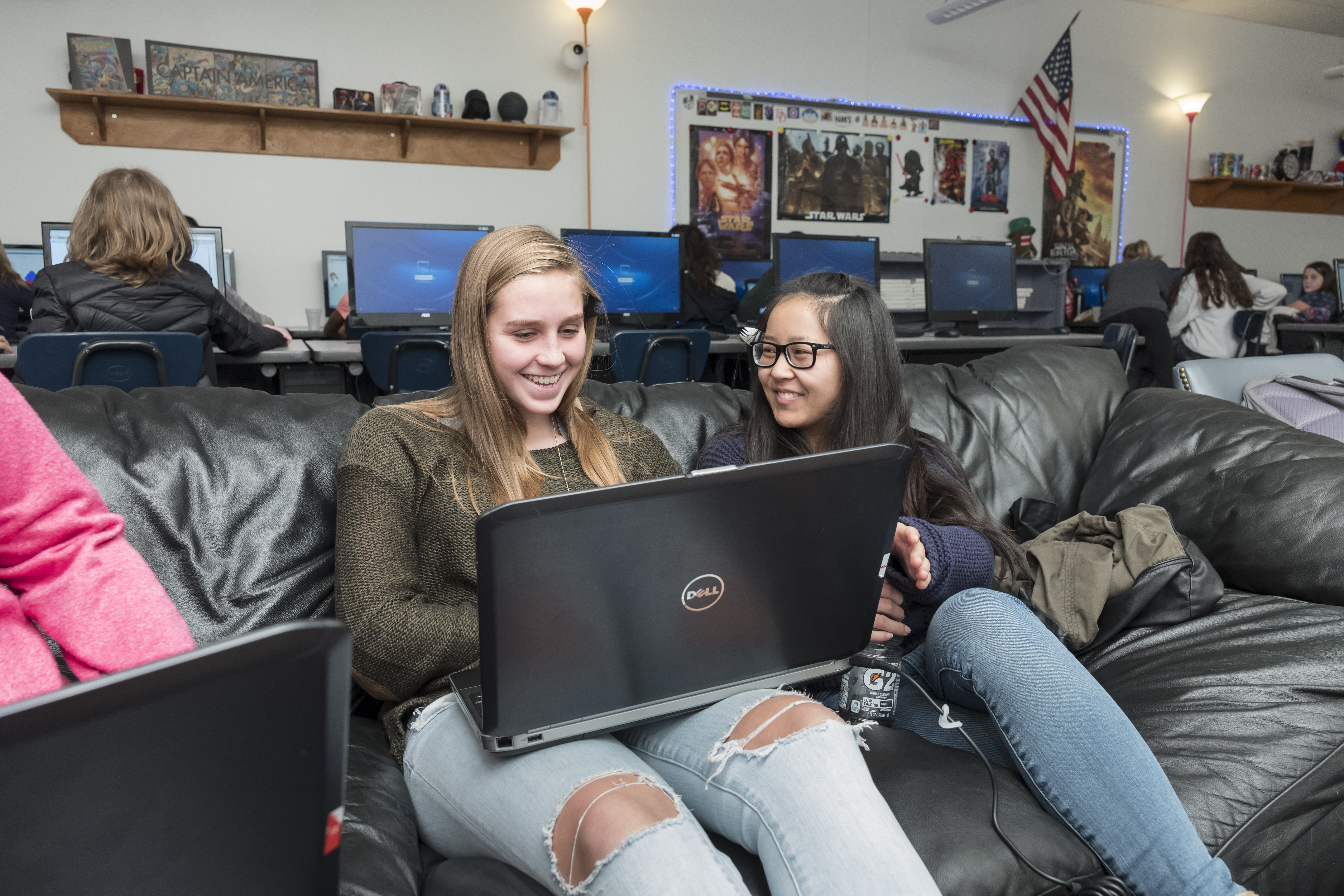 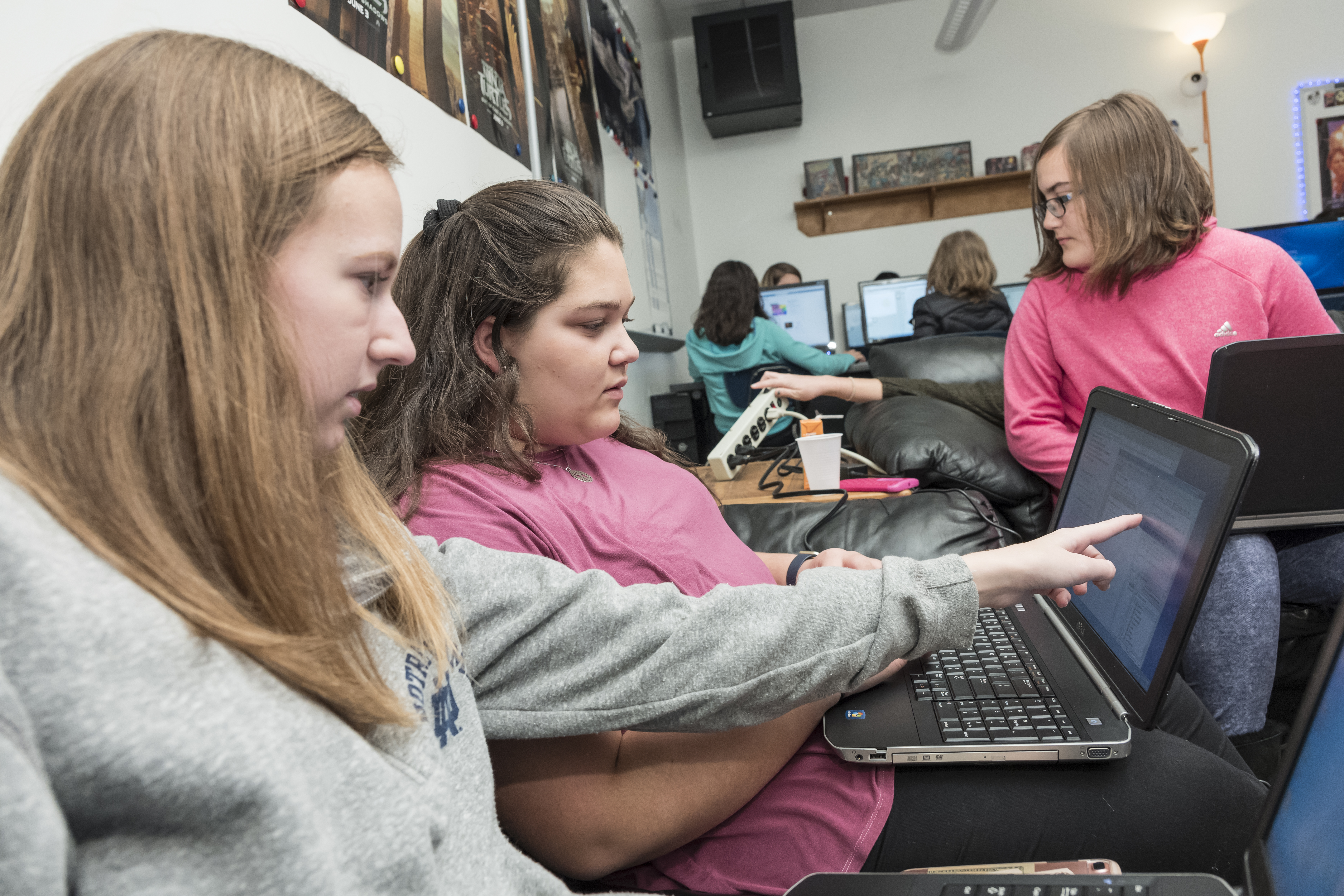 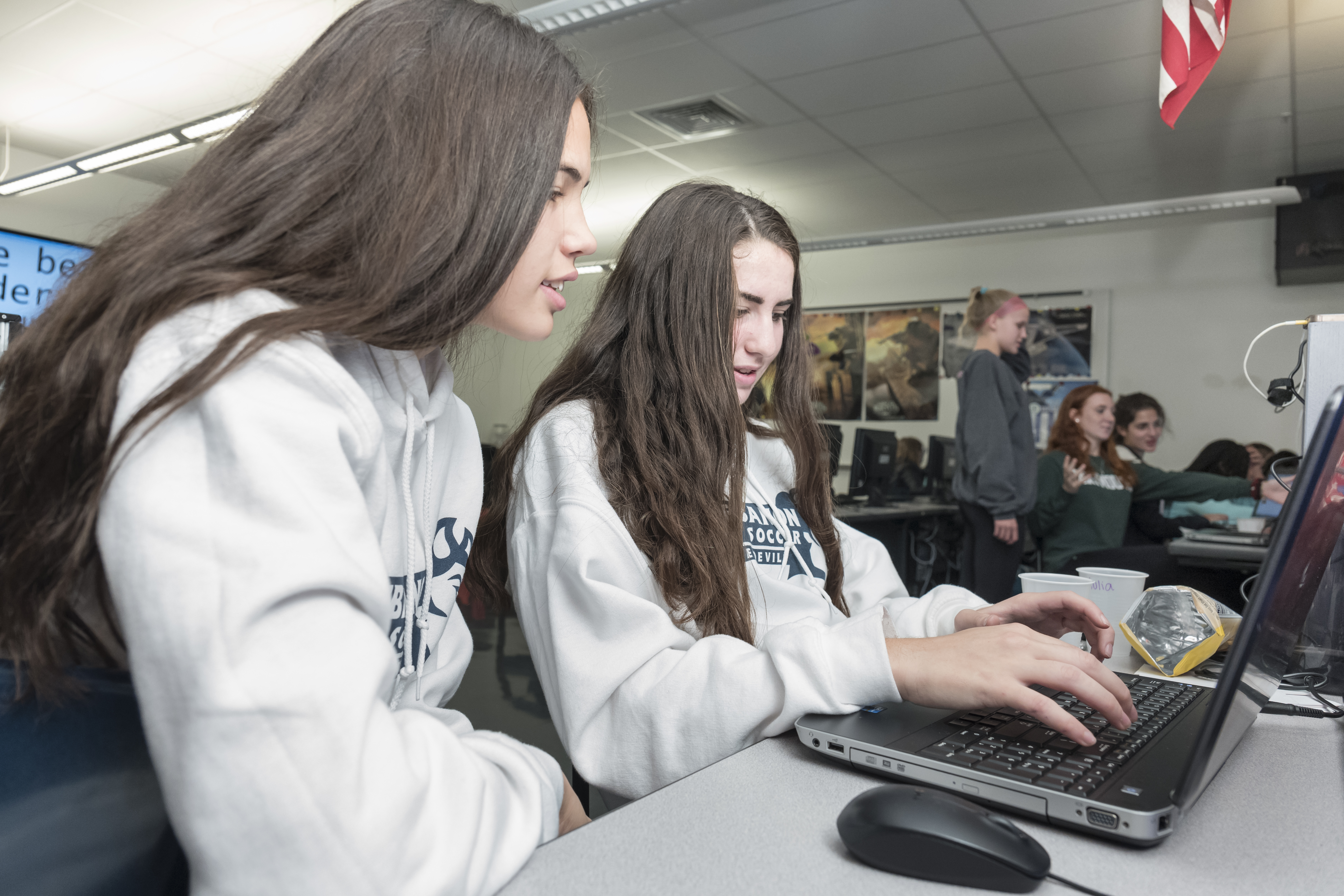 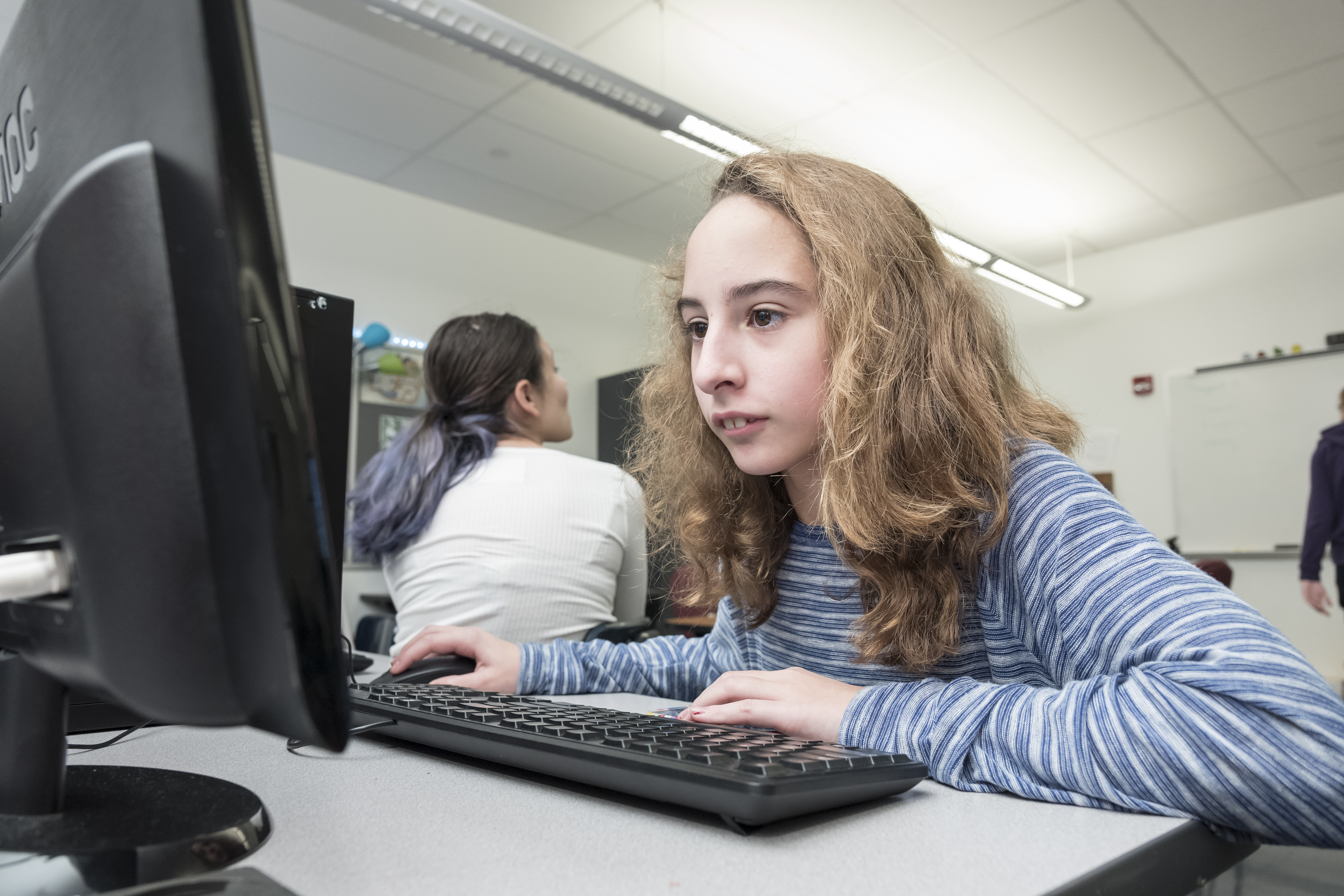 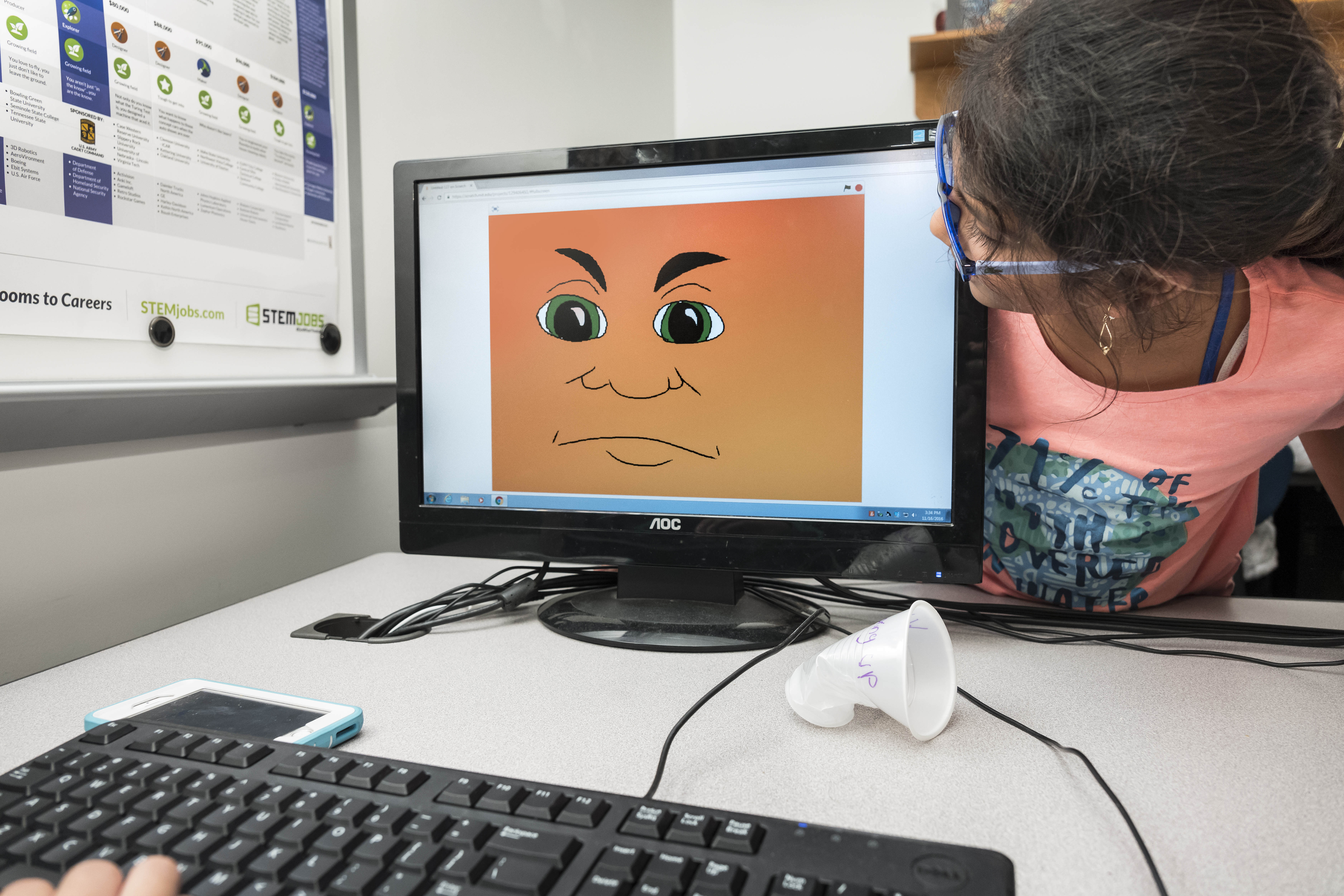 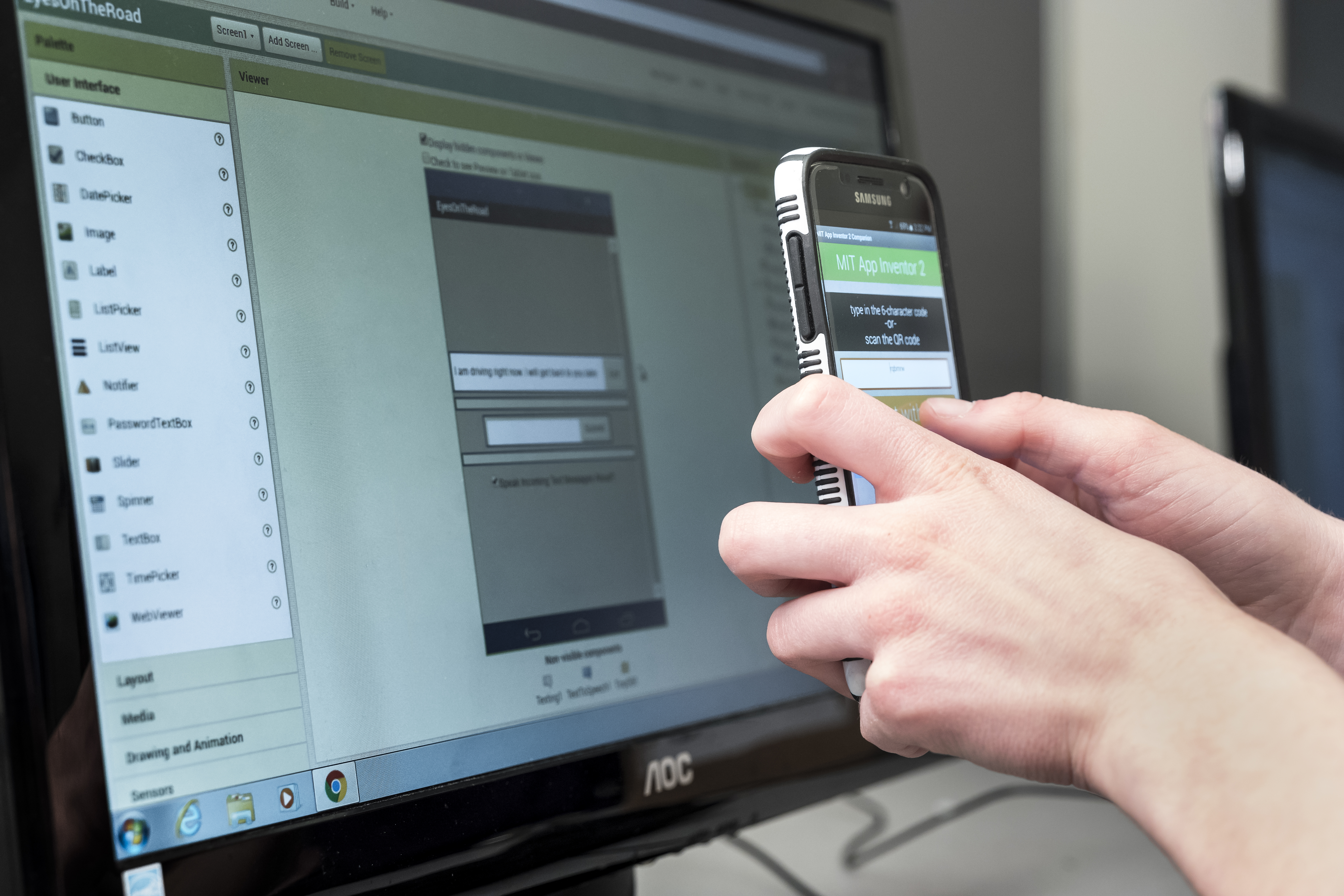 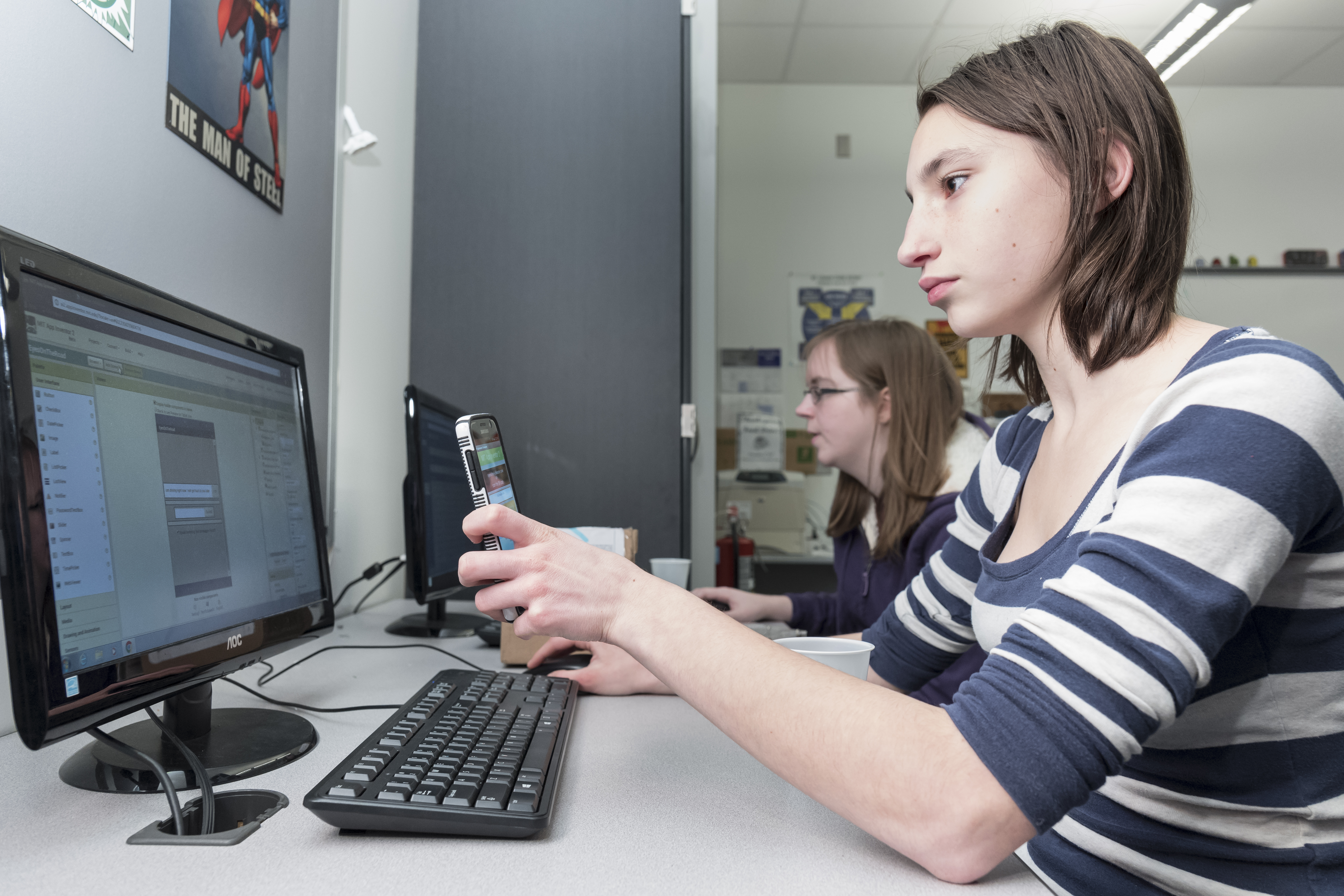 Women have been consistently under-represented in computer fields, both in higher ed, and in the  workplace. In 2014, only 17 percent of all female college graduates majored in computer sciences. According to the National Center for Women in Technology,  only 18 percent of professional-level women in the workforce  are in computer occupations.

It’s a conundrum, when you consider that women actually were the first coders in the 1940s and ‘50s (when a computer took up an entire room), or that the first algorithm and first computer program was written by a woman, Ada Lovelace (1815-1852); or that a woman, Grace Hopper, a Navy admiral, (1906-1992) invented COBOL, one of the first computer languages in the marketplace.

The Coding Gals’ faculty adviser is Christopher Stengel, director of technology since 2005 for the Mt. Lebanon School District. Stengel, with a computer science degree and an MBA from CMU, hails from Whitefish Bay, Wisconsin. He and his wife have two sons.

At the weekly meetings, 15 to 20 middle school and high school girls explore coding language, make apps and learn how to command robotic Sphero balls, app- and Bluetooth-enabled toy robotic balls that can be programmed to roll forward, backward, flash colors and even jump using a simple coding program called Scratch.

In a school district overflowing with dozens of sports and after-school activities, Stengel is happy that the club brings together students from grades 6 through 12—and it’s one of the only district clubs to do so. “These girls could be doing so many other things; yet, this is what they come to learn,” he says. “They’re breaking down barriers.”

There’s a palpable excitement in the room when Coding Gals talk about coding.  High-schoolers and sisters Ryleigh and Courtney Byrne, and Mong (Yumeng) Zhang, are looking forward to more coding, some field trips and taking on complex computer languages: Python, Java and Visual Basic:  It’s like getting the keys to the kingdom, or a map to buried treasure. 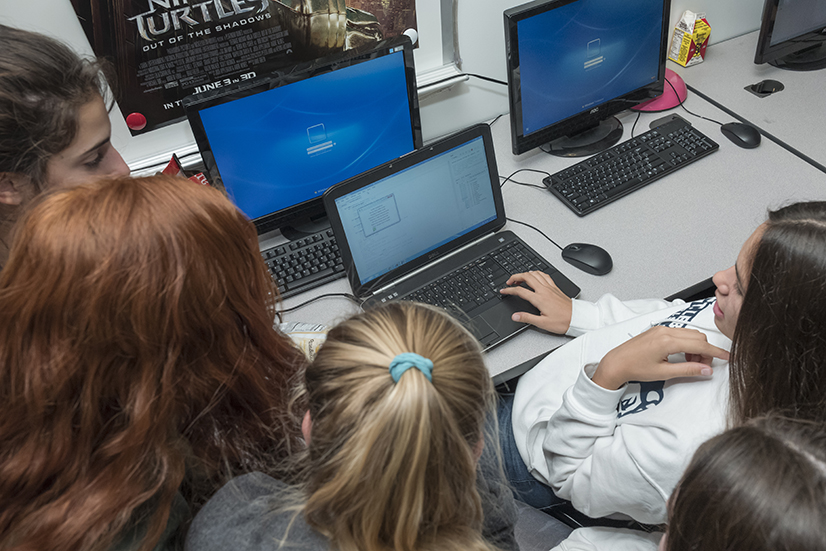 Ryleigh, a 10TH grader, is interested in technology in general. “I wanted to learn coding in a good environment and choose my own projects,” she says. A 12TH grader, Mong, setting her sights on biology and environmental science, wasn’t familiar with coding, but wanted to try it. “Technology is going to be at the forefront of society, and we all want to be part of it,” she says. Despite the challenges of coding, the club is relaxed enough to make coding fun, not another line item in an already crowded schedule. “They know how everyone is trying to balance sports, music, and homework. You come when you can come,” says Ryleigh.

These girls love having the younger girls involved and the middle schoolers are thrilled to be finding their way around the high school. All agree that being a Coding Gal enables them to support each other as coders.  “Girls like to learn with each other,” states Courtney Byrne, a 12th grader looking toward biomedical engineering. “Cool projects help us learn more about robotics,” like the robotic sailboats she learned to program and run in Boston last summer.

Mt. Lebanon alum and CMU computer and electrical engineering student Tara Stentz has substitute taught AP computer science courses at Mt. Lebanon. She is passionate about getting more girls and women into coding. “I never coded before going to college. All the guys had coded since the age of 12. It seemed overwhelming! Now I’ve caught on. My younger brother taught me Minecraft, (a computer game) which teaches programming,”  she says.

Why does she think computers didn’t catch fire with girls, even though the first coders of the first commercial computer—the UNIVAC—were women? “Computers were introduced into homes in the 80s as toys for boys and marketed exclusively to boys through video games,” she says.. “There’s no ‘glam’; computers and coding were not presented or marketed as attractive to girls or women in our culture. But you don’t have to lose your femininity to be a coder.” 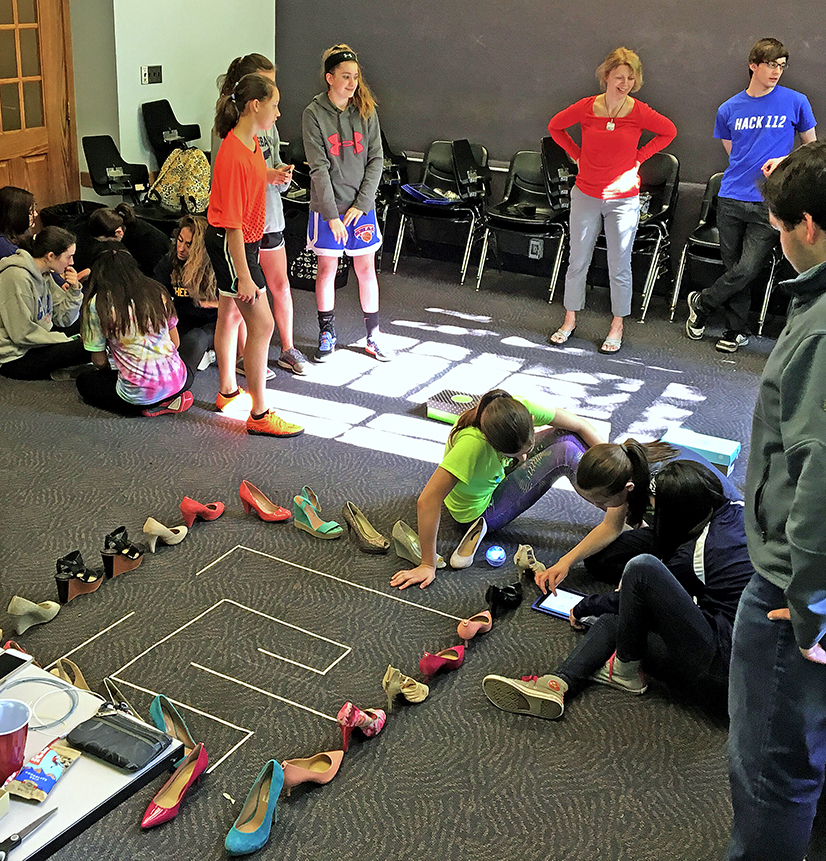 That point was illustrated when she and her CMU friends, who invited the Coding Gals to an all-girl ‘hackathon,’ (a large-group computer programming event) last spring used multiple pairs of Tara’s high-heeled shoes to create a maze for the Sphero balls. Rules of the game were: double points for pre-programming the balls, using code to get through the maze, and single points for shepherding the balls using their phones and an app.

What these experiences are about is learning how to learn—fearlessly, says Stengel, who learned “14 or 15” programming languages in college. “This learning not only expects but plans for failure. If you fail, you pay attention.  And you learn not to be afraid to hit upon another iteration. And another. And another.”

“Where the world is going is very technological,” adds Stentz. “The new generation of students want to try everything, and they’re so well informed. One girl I talked to wanted to work in human/computer interaction. That would never have occurred to me at her age.”

Like the older Coding Gals, Caroline Kenney, in 8th grade at Jefferson Middle School, spoke of using her love of science and math to help others —“programming robots to perform human services or help people,” she suggests.  “Being able to code is really important. We are part of the Tech Revolution. Coding makes you feel like you can do anything! You can make a drawing draw itself!”

Along with homework, coding, field hockey, softball, studying piano and violin, and performing in a youth orchestra, Caroline is a member of the “Girls of Steel” junior robotics team, sponsored by CMU. (She hastened to add that she’s an only child, and her parents don’t have to usher any other children to activities).

The hackathon was a big milestone for Caroline and the other Coding Gals, especially sitting down to talk to Tara and the computer engineering girls about their programs. The group is looking forward to more field trips, more hackathons, and, of course, more coding.  Ah, the coding. Not always easy.

“Right from the start, you encounter bugs, bugs, bugs. In programming, nothing ever works the first time,” Caroline muses. “So you have to keep at it. Always keep at it. You learn to keep trying. You might say it’s a metaphor for life.”

Dr. Dena Haritos-Tsamitis is the director of the College of Engineering’s Information Networking Institute (INI) at Carnegie Mellon University, and a Mt. Lebanon resident. 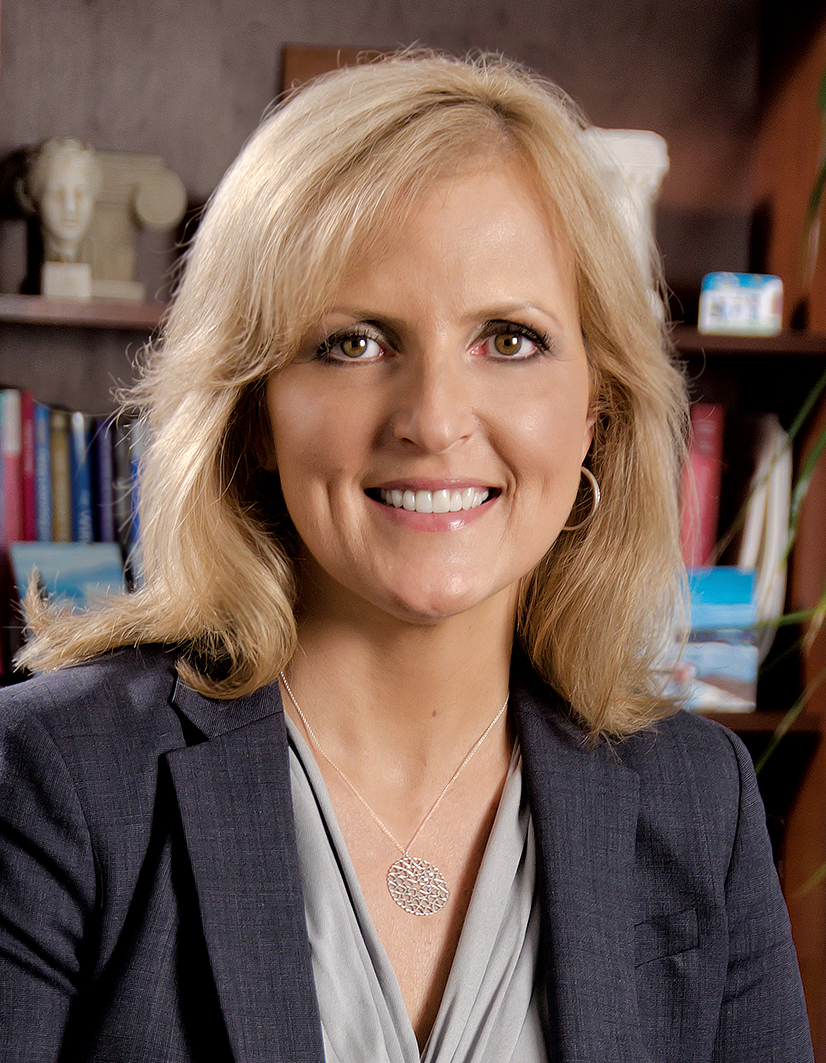 As an educator, what do you want middle and high school girls to know about the computer science and computer engineering fields at CMU, and as a career? What advice do you have for girls and their parents?

What I want middle and high school girls to know is the tech world needs you! The industry wants young, passionate women in the field of technology. Diverse perspectives are essential in computer science and engineering fields. I encourage students and their parents to seek out STEM educational opportunities, both in and out of the classroom. Carnegie Mellon offers several learning programs at the Leonard Gelfand Center for Service Learning, and I particularly recommend Spark Saturdays, run by the Electrical and Computer Engineering schools; Society of Women Engineers High School Day and Middle School Day, Summer Engineering Experience for Girls (SEE) and Carnegie Mellon picoCTF 2017 is geared toward middle school and high school students to pique interest in the field. It’s a computer security game that consists of a series of challenges centered around a unique storyline where participants must reverse engineer, break, hack, decrypt or do whatever it takes to solve the challenge.

Carnegie Mellon has seen the proportion of women in computer science and engineering soar above the national average. However, increasing numbers at one university is only a starting point. In the computer science and engineering fields, the status quo is not sustainable, and I am passionate about closing the gender gap. As Admiral Grace Hopper once said, “The most dangerous phrase in the English language is, ‘It’s always been done this way.'”

Code: which can be short for source code, describes the text that is written using the protocol of a computer language, such as Python, Java, PHP, or other programming language – by a computer programmer.

Programming:  the act of an individual writing code (a set of instructions) that are to be interpreted and executed by a computer or other electronic device.

App: As a noun, an app, application, software application or software program is the most common software on the computer that performs a special function or task. “App” and “program” are considered interchangeable terms.

Robotics: A field of study that deals with robotics or computerized or automation mechanics.