When Kinky Boots superstar and Tony Award winner Billy Porter played Pittsburgh last summer, many of his friends from the Center for Theater Arts (CTA), now in their 40s, were in the audience recalling his days at the Center, which is celebrating its 35th anniversary. Porter traveled from Pittsburgh’s East End for classes via public transit and caught rides home with the parents of current Center Executive Director Billy Hartung. Porter humbly expressed his thanks for the training he received when he performed at a CTA fundraiser three years ago.

A number of other talented performers have emerged from the Center over the past three decades. There’s Broadway vet Tim Federle, author of the Better Nate Than Ever series… and Rema Webb, who appeared on Broadway in The Lion King and is now opening her own school for the arts… and Heather Mazur, who has appeared on TV series ranging from Modern Family and CSI to Glee and Pretty Little Liars… and popular Pittsburgh actress Chris Laitta, seen frequently in CLO Cabaret productions and last month as Anne Frank’s mother in Pittsburgh Public Theater’s production of The Diary of Anne Frank.

But the Center’s is not about creating stars, says Hartung, 43, who has led the nonprofit school for the arts since 2006 in its current location at 250 Mt. Lebanon Boulevard. It’s about providing a safe, nurturing place where kids can make friends and discover their talents, whatever they may be.

“Come to the Center and Be Yourself” is the motto of the school, which today serves 600 families, 85 percent of whom live in Mt. Lebanon. “It’s who we are teaching, not what we are teaching that matters,” Hartung says.

“We’re looking for who the children are, what they can be.”

There was something special about the Center from the get-go, when it opened its doors in 1981 to a few handfuls of children at the then Woman’s Club of Mt. Lebanon on Hollycrest Drive. Unlike ballet school or gymnastic lessons, the Center’s musical theater program integrated singing, dancing and acting.

Founding Artistic Director Judy Nowe Gelman says the Center set out to attract the best performing arts teachers in Pittsburgh to Mt. Lebanon with the goals of offering students excellent performing arts instruction and developing them into a literate, well-informed future audience.

“Little did we foresee all that would transpire,” says Gelman. The faculty, several of whom remain on staff today, created a culture where students not only mastered skills but were encouraged to share their talents with the community—at school, in church, at senior centers and at festivals and events.

“That is what happened and is continuing to happen,” says Gelman, who went on to found several other performing arts schools in the region and around the country and now works in Mt. Lebanon as a real estate executive with Berkshire Hathaway. “I miss teaching and those kids every day,” she adds.

Missing the Center is an experience Gelman shares with many former students who work in fields ranging from film and theater to law, medicine, teaching and sales. They remain connected, if not in person then on Facebook. To them, the Center was not just a place to take ballet or be a character in a play. It was a safe place where they could be themselves without fear of failure or worries about being bullied.

“When I think of the Center I think of my whole childhood,” Laitta says. “It was my home away from home and the place where I learned to take chances.” She recalls mentors such as longtime musical theater teacher Carol Lee Ponzio, “who nurtured you as a whole person and gave you the feeling of being part of something special, something creative.”

Clinton Robb Bennett of Mt Lebanon studied at the Center with Laitta and has worked as technical director for many Pittsburgh cultural organizations, including currently the Civic Light Opera. A former Center board member, Bennett echoed Laitta’s feelings about growing up there when he told Hartung,

Hartung performed as a preteen with both Laitta and Bennett in Gelman’s first Touring Company. Today, with a BFA, a master’s in curriculum and instruction, teaching experience at Pittsburgh CAPA high school and a successful performing career that includes Broadway and film credits, he is a good fit for the Center.

Though he still performs when his schedule permits, Hartung returned to Pittsburgh from Manhattan to raise a family. He and his wife, Sharon, bought his parents’ house on Birch Avenue in Mt. Lebanon and today are parents to six children, newborn to age 15, five of whom study at the Center.

He and the faculty and staff, including longtime associate director Cindy Gray, along with a committed board headed by Kate Aracri, continue to make the Center a home away from home for kids, as well as a community asset. A source of pride for all involved is the Center’s long-time Friday evening program for children with special needs—a class that over the years built such strong bonds among participants that some of the originals continue there today in an adult program.

“The needs of all kids at the Center are special,” Hartung says. “On Fridays, we just implement a different strategy.” 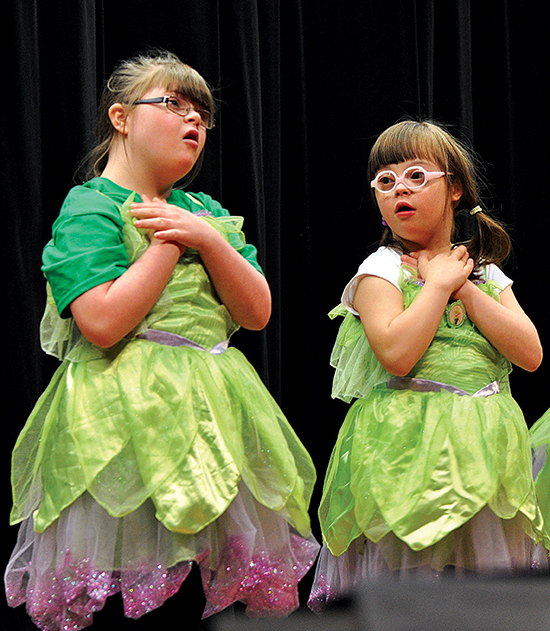 He reflects on the Center’s longevity. “How do you get a place like this? You have to believe in kids. No tricks, no gimmicks. We have made it to their dining room tables and to the heart of the family—that’s why we’ll stay.”

If students remain enrolled past third grade they generally stay through high school, says Hartung, and have the opportunity to appear in various musicals, recitals and performances as well as to take classes. He purposely chooses to stage musicals the high schoolers don’t know well to promote creativity rather than imitation—the off-Broadway musical Zombie Prom, for example, instead of Grease. With an unfamiliar choice, “they have to trust and risk,” he says. 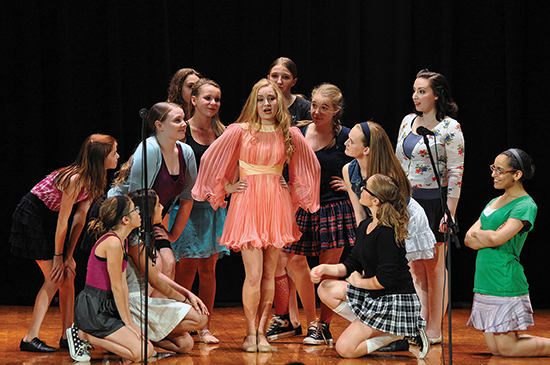 Interestingly, it’s not performance nights or being the star that makes the biggest impact on the students; it’s the long hours 45 or 50 kids spend rehearsing and in the process talking about their lives. Says Hartung, “They don’t remember four shows—they remember five months of trying.” When the cast list is posted, they typically don’t care what part they get, he adds: “They just want to be part of it.”

Hollee Schwartz Temple was a standout performer as a teen, but at 41, she is a more typical Center alum than the stage and film stars she’s still friends with on Facebook. She performs occasionally, but her main gig is as a law professor at West Virginia University. She credits Marian Bollman, vocal coach and accompanist at the Center for 34 years, with influencing her teaching style.

“(Bollman) cared so deeply and always talked to us as if we were real people, not kids. She could be very critical and yet it was so motivating,” Temple says. “I try to bring the same rigorous but kind of approach to my law teaching. I want to scaffold my teaching up to the next level, just like Mrs. Bollman did every week.

“My theater training helps me every day,” Temple says. “I look at every class as a performance and view my classroom as a theater. (She teaches from the middle with the students seated around her.) I try to command their attention the same way I did on stage, and I’m at ease speaking publicly because I was trained for it all those years.”

Like many others,Temple discovered that “Reach for a Star”— the words that appear in the Center for Theater Arts logo—means pursuing what you enjoy most and do best. That is exactly what Hartung wants for today’s students.

“We don’t use words like talent and ability,” Hartung says. “We’re talking about commitment and curiosity. Out of that comes potential.”