When Logan Larson found himself at a competitive cheerleading competition, he didn’t expect to come away feeling completely energized. “It was such a great thing,” he says, “You could tell that the girls were really excited, and so happy, and not nervous at all.”

Quite an astute observation coming from a Lincoln School third-grader. He was referring to the new Mt. Lebanon Competitive Youth Cheer team, which scored an undefeated season in 2016, and of which his older sister, Haley, is a member. It was the team’s first year of existence. 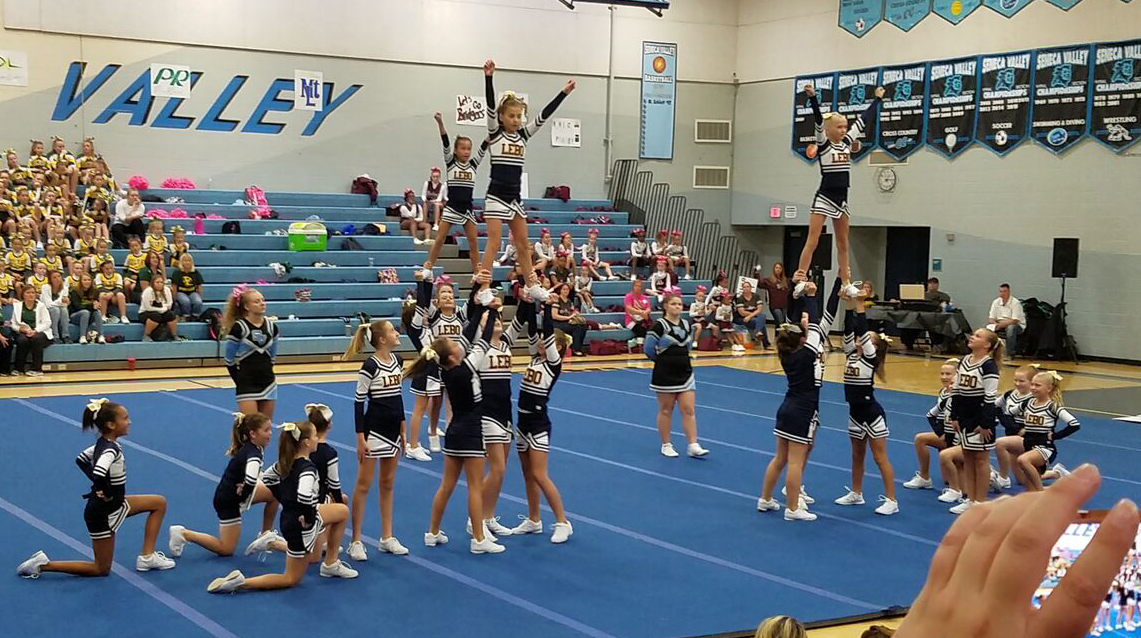 Logan, along with his mother, Michele, and the rest of the cheer parents, went to all three competitions so bedecked in fan-gear that, in addition to scoring first place each time, the Lebo girls also took home the Spirit Award for having the liveliest fans.

“When we went to the first competition, a lot of us didn’t really know what it would be like, so we just made signs for each of the girls” says Michele. “Then the next time, a parent made cowbells, and the time after that, someone brought necklaces with whistles. We just kept adding on layers of cheer!”

The parents weren’t the only ones who didn’t know what to expect. “Probably 95 percent of the girls never even saw a cheer competition,” says Tracey Green, team organizer. “But they took first place every time. We had no idea that they would do that well! I just went in with my fingers crossed, thinking, ‘I hope this isn’t a nightmare.’”

The girls on the team did have some cheer experience, however, as they are all members of Mt. Lebanon recreation department’s youth cheerleading program.

The Recreation Department League
Green was one of the original volunteers for the program when it began six years ago, and she continues to help coach for the league today.

Her cheerleading experience began in eighth grade in Mt. Lebanon. A 1993 Mt. Lebanon High School graduate, she went on to cheer in college at Duquesne, while working as a coach for All-American Cheerleading. Green now has four children (two at Mellon School and two at Howe School). Both of her daughters have participated in the rec department program.

Kids from any school in the area can join the rec league, but they have to be in first through sixth grade. Non-residents must pay an additional, small fee. “Right now, we have around 135 girls total in the program,” says Green. “No boys at the moment, but we do have some brothers on the sidelines. We will really feel like we accomplished something if we can get some boys to join us!” 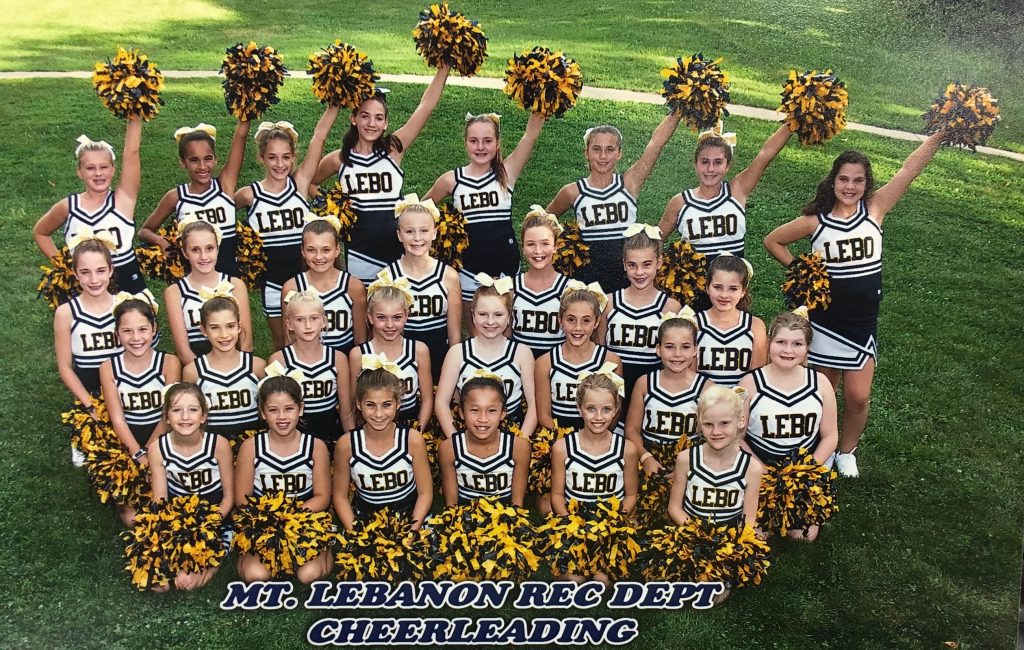 The rec league does not compete. Its function is to cheer and perform halftime dances at youth football games—first and second grade teams cheer for flag football, and third through sixth for tackle. Practice begins in August with a cheerleading camp.

“We mostly just focus on cheers and stuff like that to get the football teams motivated,” says Haley Larson, sixth-grader at Mellon School. “And it helps the crowd to have us there. But it is a very different experience from the competition team.”

Haley’s first year of cheerleading was 2016, but many of the girls in the league are veterans. Since it just completed its sixth year, 2016 was the first season that the rec department league had members who cheered with them through every possible grade level.

“The girls were just getting so good. They seemed above average for their age last year,” says Green. “I would often tell them that I would like to try something [that should be difficult for their age group], and they could do it, no problem… They could do anything that the high school cheerleaders could do… So I started looking at pricing to start a competitive team for the fifth and sixth graders.” 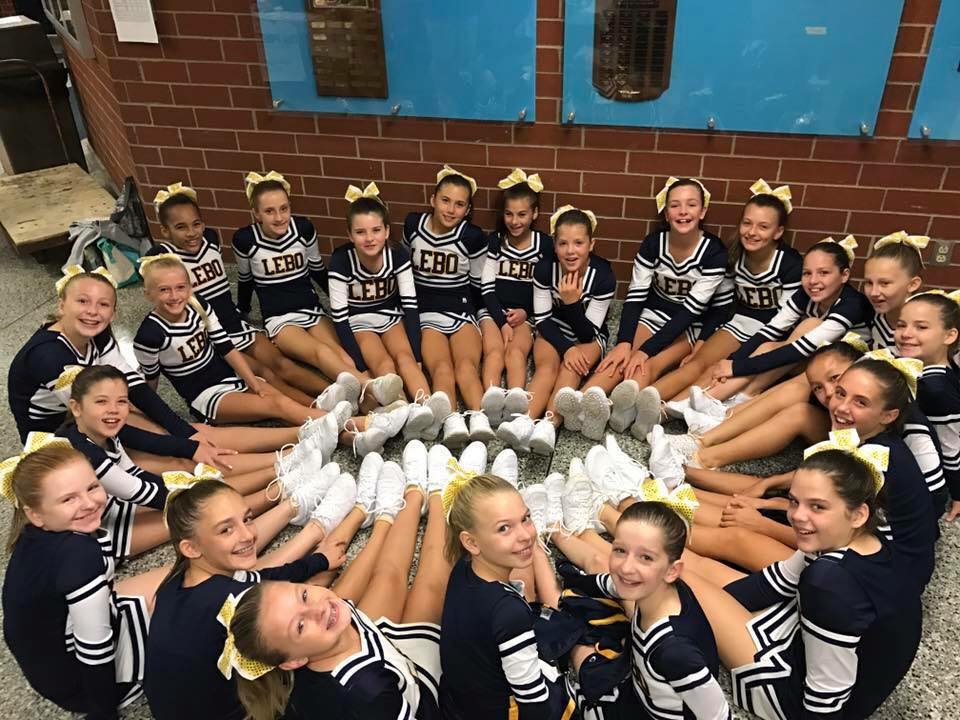 “We found out we could do it pretty cheaply [$45 per cheerleader] since they already had the uniforms, and some of the other moms came forward to help out” says Green. “But the deal was that the girls had to also do the rec league.” Green limited the signups to 24.

Green plans to use the same system for 2017 sign-ups. Sometime prior to the upcoming season, she also hopes to host clinics for kids who might be interested in joining so that they can learn what to expect.

“We are competing in a recreation department division, so it is pretty low-key,” says Green. Teams in the division include Bethel Park, Seneca Valley and South Park. “Girls can get a taste of competitive cheer without having to go to an all-star school, spending a couple grand and needing to be there five times a week. But we do expect the girls to be there when they are supposed to be.”

Team members are required to attend practice once per week, beginning in July, and they often run through their competition routines after rec department league practice. Competitions are scheduled throughout the fall months.

“Tracey and the other coaches on the competitive team do a really great job of coordinating, because they realize that a large number of girls are on both teams,” says Michele. “They also do a great job of inspiring the girls and being supportive of their natural talents.”

Some of the team members are gymnasts, so the girls were able to learn and support many stunts and acrobatics. In fact, at one of the competitions, a dispute arose when the Mt. Lebanon team was docked points for using a “high-school-level” move. The points were later awarded back to the team. Watch the video below, which was filmed in competition, to see an example of a typical competition routine.

“We have a lot of athletes on the team,” Green says. “We have girls who play softball, basketball, volleyball, and we also have gymnasts and dancers. But I think that competitive cheerleading will really be an advantage to them in whatever they decide to do. I would love to see some of them continue cheerleading into middle school and high school.”

Kids who are interested in joining either team should keep an eye on the recreation department’s youth cheerleading page for 2017 registration details, or they can email Tracey Green for information about spring cheerleading clinics.

“I know a lot of people think cheerleading is hard. Or they might think that cheerleaders will be mean because of the movies,” says Haley, “But it’s really not true. Everyone is very nice. They don’t judge you on the things you can or cannot do. If you can’t do something, they will still give you a job so that you don’t feel left out. I know for sure that anyone who is thinking about it will really enjoy it. It’s super fun for everyone involved.”