We’re having a 70th high school reunion.  Why? We all are born in a crease in time, and have no control over it. But that crease shapes our lives.  Ours was a unique crease because our early years were shaped by the Great Depression and the Second World War.

| Depression Mentality |We shared a lot of the same experiences as The Greatest Generation. Like them, because of the Depression, we were taught harshly about hard work, discipline and respect for authority. And back then discipline was a little different. Criticisms were often delivered with a backhand or a sturdy rod. Our Catholic grade school principal was renowned for her red paddle, which had holes in it so the air wouldn’t slow it down. The other nuns selected their own favorite “teaching assistants”—one reportedly went through five yardsticks a week. My mother was a loving, lovely enlightened lady; still I found myself locked in the hall closet on occasion. And I wasn’t the rebellious type. Even when it came to doing sprints and pushups on the sports field until you puked, you did it—that was the assignment. I often wonder how today’s young rioters or those disrespecting campus speakers would have fared back then; in fact, I always chuckle a little at the thought.

| The War We Didn’t Get to Fight | It hurt when our older brothers and cousins or sometimes a father, an uncle or an older friend went off to war, and we stayed at home. In almost every class in high school, some students lost loved ones. I lost a 20-year-old cousin at Luzon who was just five years older than me. He taught me how to jitterbug (you wouldn’t recognize any of the steps). It was a terrible shock. I felt overwhelmed with grief, anger and even a little guilt. The students were very much into the war effort. Ralph Horsman, the principal, asked me to organize a scrap drive.  We collected cans and saved grease. We worked on victory gardens and helped with blood drives. But we weren’t over there. Maybe that slight sense of guilt or the feeling of being out of step with history bonded us and gave us a special sense of a comfort with each other. Many of us went on to serve in Korea, but it was different. In the Second World War our country was strong together, joined in a shared mission. It was a defensive war; we were attacked, and we as a country reacted together with great resolve, defeated formidable opponents and won. Since that time, every war we have fought has been political, putting our forces in harm’s way to attain political goals. We haven’t won a war since. In every war since, the military has been engaged but the civilian front hardly at all.

| After the War | When the vets came home, we were so happy.  But it changed our lives. Some vets came back to high school and interjected reality into theory. The colleges were packed with vets, and rightfully so, but suddenly, it was hard to get into college. My grades were average (OK, my mother had told me I didn’t apply myself). But I had trouble getting into a school.  My dad played semipro football and basketball with Art Rooney and his brother Silas, who became a priest.  As luck would have it, Silas was the athletic director at St. Bonaventure. Dad made a call to Mr. Rooney. and suddenly I was enrolled at St. Bonaventure. The campus was full of vets, mostly great guys whose stories and attitudes educated me and helped me mature. They also were happy to teach me how to drink beer with games like “Cardinal Puff,” and ”Bop and Squirt.” (don’t ask!) 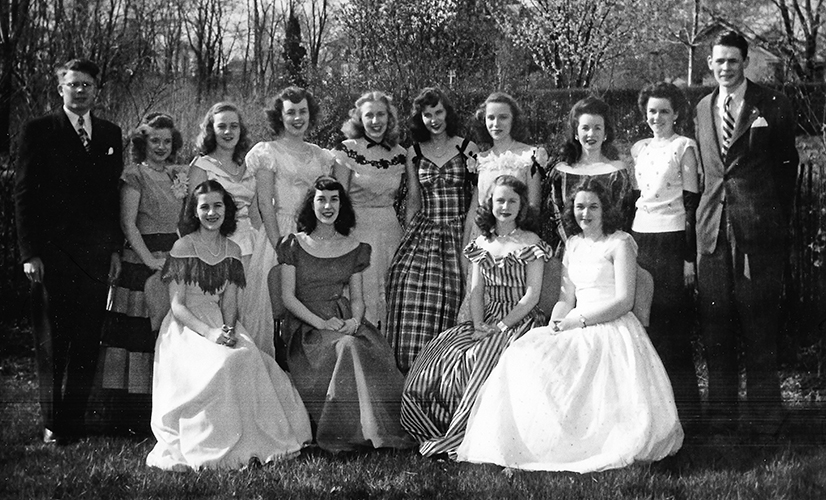 | Lifelong Friendships |  Our high school class was profoundly affected by our exposure to people who had lived so very much, so very young.  And the relationship our class had in high school turned out to be more meaningful and lasting than we expected. We have stayed unusually close for an unusually long time. We graduated in June 1947, and our first reunion was in August of that year at the Roosevelt Hotel in downtown Pittsburgh. We had reunions every year for the first 10 years, and have had one every five years ever since. Many of us have played golf, traveled together, socialized together, and in many cases, been best friends.

| Feeling Lucky  We have been gifted with some things our parents weren’t. When we were young, you lost parents or other loved ones at 60 and 70. We are knocking on the door of 90, but we are a different breed of old people. One of our classmates, Steve Mosites, shot his age in a golf tournament this past summer. Last year, in Florida, he shot in the 70s. I told classmate Marilyn Weigand McShannic of this recently, and she said, “I want a match. I am still playing.” Nan Gould Houk, a renowned dancer from our class, still hoofs it up doing Zumba. Federal Judge Gerry Tjoflat is still dispensing justice and wisdom in his jurisdiction in Florida (on the 11th Circuit; he is the longest tenured federal judge still sitting).

Of course, we have some sad stories, too. But of the 300 plus in our class, there are more than 100 still active and still with the special spirit of the class of ’47. Why do we want to have a 70th class reunion? Because we can.