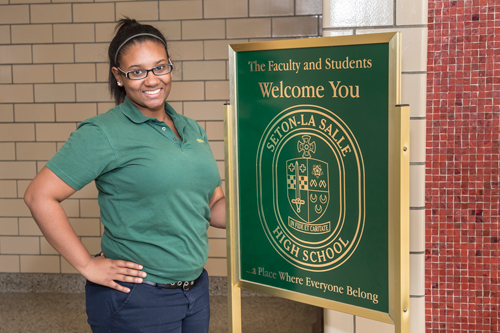 When Justin Payne was a middle school student at St. Agnes Catholic School in West Mifflin, his education and future were shaky. Payne was a good student, but he was headed to public high school, and his work habits needed work.

“I feel like it might have been a coin toss at that point,” says Payne. But just as his coin flipped into the air, he was chosen from his Beltzhoover neighborhood by the non-profit Crossroads Foundation to attend Seton-LaSalle Catholic High School on a scholarship, where he received lots of support.

“Being the only black kid there, it was difficult at first. I didn’t know how I would fit in,” he says. But Crossroads pushed him to get involved, and after making friends at band camp and learning to lean on Crossroads staff and volunteers when he needed help, Payne succeeded. “It was like having a second set of parents,” he says of the support team.

Now 19, Payne expects to graduate from California University of Pennsylvania with a business administration degree in 2016 and is considering going to law school.

Crossroads, which is celebrating its 25th anniversary this year, is more than a Catholic high school scholarship program. Founded by Susie Gillespie of Upper St. Clair, and her father, the late Ed Ryan of Ryan Homes, along with Gillespie’s classmate, Sister Sandy Kiefer, Crossroads pays for much of the tuition. But instead of placing children with potentially wide cultural and socio-economic gaps into intimidating schools full of strangers, the program offers them tutoring, constant progress monitoring, 24-hour counseling and other things that empower them in their new surroundings.

Crossroads’ Mt. Lebanon connections are vast, including board president Dean Calland, vice president Dr. Richard Gobbie, early supporter Jane Voigt, mentor Cathy Frischkorn, board member Neal Shipley and many others. Over 25 years, Crossroads has helped 550 at-risk students become scholars. This year, the program has 115 students enrolled in grades 9 through 12 in various Catholic high schools. Thirty-two of those students are at Seton-LaSalle on McNeilly Road in Mt. Lebanon.

“From the moment that we accept these young men and women into the program, we are all about them succeeding in their academic programs, developing the proper study and life skills, and motivating them to attain their goals,” Gobbie says. “We wrap a cocoon around these young men and women and ensure that they can navigate the normal pressures of school and adolescence.”

Selection criteria vary, but all students come from Catholic grade schools, which typically draw students from various home communities, including pockets of poverty underserved by local public schools. They must be good students, with at least an 80 percent grade average.

Combing through the applications is the toughest part for the decision makers, says Executive Director Florence Rouzier, who has been in that position for four years. When they read about the kids’ circumstances—anything from being homeless to having drug-addicted parents to being raised along with four siblings by a grandmother with three jobs—the selection committee shudders to realize that the kids they can’t help will likely end up in failing public schools.

“Your zip code should not be your destiny,” Rouzier says. But money only goes so far, and more than half of the worthy applicants will not get in. “It’s heart-wrenching,” she adds.

The program helps students cultivate good habits, but expectations for them are high. Students must follow a rigorous curriculum of college prep courses and meet academic standards, and their families are required to pay at least a portion of the high school tuition.

Crossroads has been exceedingly successful. This year, 56 of 115 students have GPAs of 3.2 or higher. The graduation rate is 98 percent, with 96 percent of the students going to post-secondary education. Some have even become Gates Millennium scholars, founded by the Bill and Melinda Gates Foundation to aid students with diverse backgrounds.

Graduates are lawyers, priests, social workers, school principals and doctors. But it’s not just the Crossroads student who benefits. Calland says Crossroads kids inspire younger siblings to take education seriously. College graduates are more likely to marry other college graduates and have children who attend college, proving that educating one person can change the direction of a family.

It is difficult, considering that some of the kids come to the program not knowing how to dress appropriately or how to speak to a teacher. Throw in the socio-economic pressures (how would you feel if you were crashing with several relatives because your family lost its home and your whole school lunch table was talking about their recent ski trip or summer homes?) and the counselors have infinte work, Rouzier says.

Crossroads was Susie Gillespie’s idea. Gillespie, who grew up in Mt. Lebanon and attended the now defunct Fontbonne Academy, tutored in city schools while she was in high school. The stories would rip her apart. One pupil told her the nasty wound on his arm came from a rat bite the previous night. “And that stayed with me,” she says. “Why did God plant me on that side of the river with the green grass and not the other?”

Gillespie began thinking of a way to help children continue their Catholic education in high school. Coincidentally, she ran into classmate Sandy Kiefer, who had become a nun. Sr. Kiefer signed on immediately, and in 1988, Crossroads began with 15 students, using money from Ed Ryan’s foundation.

But a few years later, Gillespie had to find other funding. As she began looking, lawyer Dean Calland and his wife, author Mary Frailey Calland, were on a long drive talking about wanting to get involved in a faith-based educational non-profit to help poor students. The next morning, their friend Jane Voigt, a former classmate of Gillespie’s, called to ask Dean Calland if his corporate contacts from his law firm, Babst Calland, could help. He started—and concluded—a $6 million fundraising campaign right before the recession hit.

The program also is funded by private foundations, individual donors and corporate donations. Crossroads receives no tax money, nor does it get funding from the Diocese of Pittsburgh. This year’s budget is $1.2 million, with about $380,000 of that going toward tuition. Tutors from the AmeriCorps program augment the staff of seven full-time employees.

Justin Payne didn’t need much tutoring but he had mentors, including Gillespie, who drove him to school and made sure he had meals each day. The program kept him on track with bi-monthly meetings that shored up his organizational skills and motivated him to go to college. “It made life a lot easier,” he says, “I’m glad I did it.”

“We are constantly amazed at what these kids can do when just given a level playing field,” Calland says. “Poverty doesn’t allow that to happen in so many insidious ways.”

Rouzier attributes much of the program’s success to the doggedness of the inventive staff and volunteers. “At Crossroads, we are all up in your business,” she says, only half joking.

For example, Calland says they had a student whose usually good grades started to fall. The student wouldn’t say much and neither did his parents. After a visit to his neighborhood, Crossroads counselors learned that neighbor kids were beating up the student because he wore a uniform. The school allowed him to change in and out of his uniform at school, and the problem subsided.

Watching students graduate is the reward for the staff and volunteers’ hard work. “At the end of the day, when graduation comes and we do it at LeMont and their parents are there and they’re all dressed up…they gained the confidence to persevere,” Rouzier says. “They have futures ahead of them. They’ve been so resilient. To share that journey with them and their families is a great privilege.”