The Pittsburgh-area food truck scene has blown up so much that you can find a truck or a trailer serving just about every eat and drink you can crave—not just barbecue and burgers, but also meatballs and mac and cheese, kebabs and cupcakes, Maine lobster and draft Champagne—even Star Wars-themed food.

OK, that last one was for a Star Wars Day at a local library this past winter where the Bado’s Pizza Truck served up such items as Obi-Wan Cannoli. Bado’s gleaming red and black vessel is one of the biggest—26 feet long, 13 feet high to the top of its exhaust vent—and nicest in the region. It launched at the end of 2017 as a mobile version of Bado’s Pizza Grille & Ale House, a brick-and-mortar landmark on Beverly Road for more than 35 years.

Founder and owner Frank Badolato wanted to go mobile and he wanted to do it right, so he worked with a Missouri company to design it from the wheels up. “It was his idea of an extension—kind of a next step,” says his daughter, Geena Badolato Nearhoof. Her dad may sometimes help run the truck—it, like him, resides in South Fayette—but she and her husband, Nolan, are the family members who mostly staff it when it parks outside of office buildings, at food truck roundups and festivals, and at breweries and distilleries around the region.

The Nearhoofs have learned a lot about operating a food truck over its first two years. The big one: If the kitchen isn’t level, pizza toppings tend to slide off and burn onto the bottom of the oven. So now the truck has hydraulic leveling feet that other truck operators envy.

Nearhoof recalls one cold winter night when a hydraulic hose broke, spilling red fluid that had her thinking they’d run over an animal. The leveler froze to the ground and the truck was stuck, until her dad and husband used a crowbar to free it.

She says “fluidity” is the secret to running efficiently with just two people on board. “We do what is necessary,” whether that’s taking orders at the big side window or taking pizza out of ovens, switching places as needed. She leaves the driving to her husband.

“It’s a full-blown kitchen in ours,” with a full deck oven for pizza, just like at the restaurant, plus a flat-top grill for cheesesteak and sausage sandwiches, a six-burner range top for everything from breakfast to lunch, soup to pasta, plus a three-bowl sink and a separate hand sink that health regulations require. Her favorite piece of equipment: “The little baby water heater.”

She says the key for customers is, “Obviously it’s a different experience, but it’s exactly the same product,” down to the dough they make each morning at the restaurant.

The Bado’s Pizza Truck is evolving into more of a rolling centerpiece for private events such as graduations and weddings. “It’s an awesome option,” she says. “I wish we had done that with our wedding.”

Private events are also a big deal for the Asado Wagon, the 25-foot-long trailer that brings the fire from Gaucho Parrilla, the Argentinian wood-fired grill in the Strip District owned by Mt. Lebanon’s Anthony Falcon, James Place. He opened the restaurant in 2013 and added the wagon in 2016.

The trailer (based at Spring Hill Brewing on the North Side, where it regularly serves food) quickly gets booked up for spring-through-fall reunions and other such gatherings, where its crew can cook whole animals on big open fires. For smaller stages, there’s a smoker on the back, which allows Asado to serve everything from the most popular item, steak, to whole racks of ribs.

Driving the diesel Dodge Ram pickup truck that pulls the wagon and otherwise running the mobile show is Executive Chef Matt Neal, who enjoys being out and about at various venues and events and interacting with people. He’s also become adept at fixing generators. Thanks to the boom in trucks, he says, “There’s been a swing in how people go out anymore,” as people eat at breweries and distilleries that don’t want to operate their own kitchens. “It works out well for them and for us.”

According to the Allegheny County Health Department that inspects and approves mobile as well as stationary kitchens, there were 231 mobile food units in 2011. By 2019, the number grew to 343.

Owner Louie Laith was running restaurants in San Diego when he read about the top-rated Mt. Lebanon schools and quality of life, so he moved his family to Mt. Lebanon Boulevard and started selling hummus and other Middle Eastern fare from a trailer. He prepares the hummus and other salads at an approved kitchen in Oakland, where he parks the trucks. He cooks the meat for the gyros on board.

His plan is to keep growing his fans and followers, who find his healthful food via social media, and then open an actual restaurant. Even then, he may continue to operate the trucks.

He credits nice people in “the food truck family” and otherwise with helping him launch a business in a new place. As he puts it, “Everyone here helped me to grow up.”

Louie, as customers know him, is one of the owners and operators who are characters. That’s part of food trucks’ enduring appeal, says Thom Gulish of Parkview Drive, who since the fall of 2016 has been full-time running Gyros N’at. “Food trucks reflect the personalities of the owner somewhat. You’re [often] interacting with the owner.”

He likes interacting with customers at regular gigs such as Saturdays at Brew Gentlemen in Braddock, and also likes the freedom his 20-foot trailer affords him to just leave it parked in Turtle Creek for a week and take his family to the beach. That said, “Our margins are thin.” They are challenged by events that charge the trucks to participate and they wish the area had a permanent food truck park and a food truck service center like other regions have. While he says he enjoys it very much, “I think we’re all a little nuts in a way.”

Juan Grimaldo launched his Totopo truck in June 2018 after establishing the Mexican restaurant on Washington Road. He sees it as a billboard for the restaurant—almost literally so, especially when it was parked at the busy corner of Beverly and McFarland roads.

The 20-foot-long Ford started life in New Jersey hauling potato chips, which have a lot of volume but not a lot of weight. When he put in a full kitchen, the truck needed suspension upgrades.

“We want people to try the food,” says Grimaldo. He hired Marco Honores Herrera of Academy Avenue to run the truck, which takes the Totopo name and tastes far from Mt. Lebanon. But they’ve also operated the truck a block away at the Mt. Lebanon Artists’ Market, the event that inspired him to build a truck. Only the rice and beans are prepared ahead of time at the restaurant.

Even if an event doesn’t look to have a huge crowd, they’ll go for the exposure. As Herrera puts it, “It’s a hustle.” And they both love it, especially for the tradition of swapping food with other food trucks. They’re always on the lookout for the next new one. 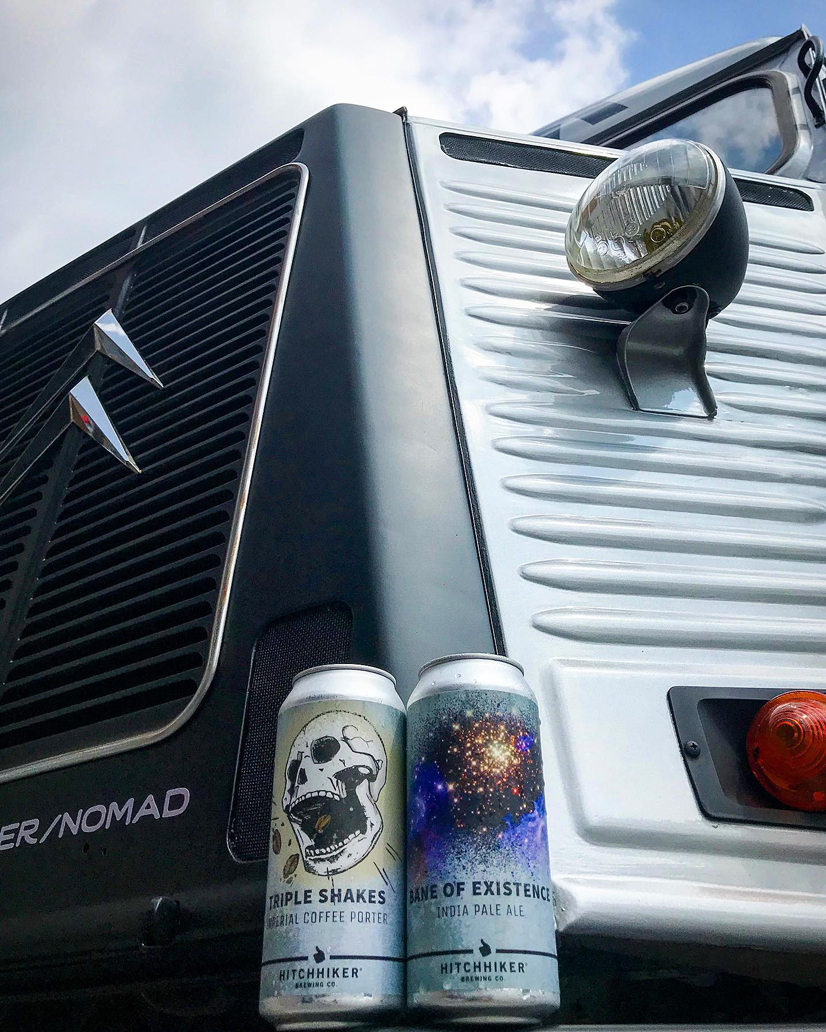 Last summer Colonial Drive’s Gary Olden  debuted, at the Mt. Lebanon Lions Farmers Market, one of the area’s most interesting looking trucks—a goofy-faced 1977 Citroën H van that he dubbed “The Nomad” and set up to dispense draft and canned beer at pop-ups and other places.
(The striking graphic design is by Adeline Avenue’s Daniel Pipitone, who also designed the new Pitaland Express truck.)

You probably won’t see the Nomad at one of the places where you’ll find food trucks in Mt. Lebanon: In the parking lot at Mt. Lebanon High School.

This year, for the fourth summer, employees in the school district’s technology department will organize seven or eight Food Truck Thursdays, for which they schedule one mobile food vendor each week. (One Mt. Lebanon restaurant that set up there, Arancini House on Washington Road, aspires to get an actual truck at some point.) They even set up tables and chairs, with tents for shade (and if the weather’s really bad, diners can move indoors to the Fine Arts lobby). They play music. The public is welcome.

“It’s building itself as a nice tradition,” says Director of Technology Christopher R. Stengel, himself a big food truck fan. “It’s fun,” he says. “And it’s nice to offer something in the summer that feels like summertime.”

You can see what vendors are scheduled at www.mtlsd.org/foodtrucks.